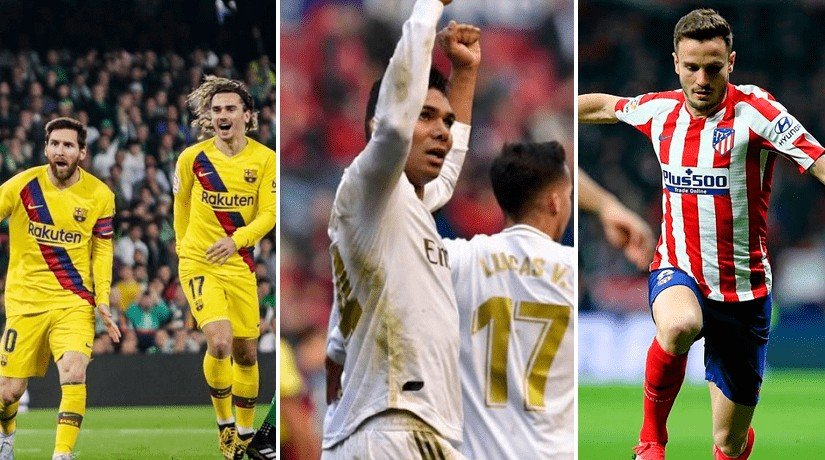 La Liga offered some nail-biters this weekend as Spain’s top flight came back after a week of mixed emotions in the Copa del Rey.

Hands up who was expecting these results this weekend? 😮#LaLigaSantander pic.twitter.com/OXCE1f2zyH

Want to see what we predicted?

Barcelona hero Lionel Messi smashed an assist hat-trick in a thriller match against Real Betis on Sunday that ended in a 2-3 win for the visitors. The final showdown of the weekend gave us more than the standard dose of Messi brilliance; we saw five goals, one penalty, ten yellow cards, and two sendings off!

2 – @FCBarcelona‘s Lionel Messi is the second player to reach double figures for both goals (14) and assists (10) in the top five European leagues this season, after Jadon Sancho (12 & 13). Critical. pic.twitter.com/zpO8Ml8H3z

Betis opened the scoreline five minutes into the action-packed clash through a Sergio Canales penalty, but four minutes later Frankie De Jong equalized thanks to Messi’s wonderful through ball. Betis got the lead again when in the 26th minute Nabil Fekir’s long-distance effort found the back of the net, but Messi was there to answer when he set up Sergio Busquets just before the break to make it 2-2.

2 – Nabil Fekir is the first @RealBetis_en player to score in each of his first two appearances against Barcelona in @LaLigaEN in the 21st century (two goals). Stellar. pic.twitter.com/1EBkv3vZLj

Barcelona got their third goal when Argentina’s national treasure directed his set-piece delivery towards Clement Lenglet, who headed it into the far corner to put the Catalans ahead for the first time in the game.

Lenglet was sent off three minutes after Fekir, so both teams played a ten-man match that saw Barcelona get back to their winning ways after a mid-week Copa del Ray elimination. They sit second on the table with 49 points and Betis are 13th, with 28 points.

Real Madrid displayed a great performance at Osasuna this Sunday. Goals from Isco, Sergio Ramos, Lucas Vazquez and Luka Jovic (his first for Los Blancos) pushed the visitors to come from behind and thrash Osasuna 4-1.

The game started with the hosts making quite a stir in Madrid’s penalty area, having three fantastic chances (and scoring one) inside the opening 15 minutes. But soon after Zinedine Zidane’s men kicked into gear and Isco found the equalizer in the 33rd minute.

Captain Sergio Ramos gave Madrid the lead just five minutes later, but by that time he wasn’t even supposed to be on the pitch. In classic Ramos style, he attempted the worst tackle you’ll ever see as he dove overtly enthused and caught Ruben Garcia’s ankle in a studs-up attempt to clear the ball. Horrific scenes.

Sergio Ramos with the most Sergio Ramos tackle ever #OsasunaRealMadrid pic.twitter.com/bk82fZkAkT

VAR said nothing, no red card was given and Ramos went on to score a crucial goal, which was followed by Vazquez and Jovic strikes in the last minutes of the second half. Fair to say that Osasuna are fuming, and so is the rest of the football world. If VAR doesn’t get this right, what will it ever do for anyone?

Atleti overcame Granada in a dour affair at the Wanda Metropolitano this Saturday, and if you’re wondering why we’re even talking about this dull game, it’s because it’s Atletico’s first win since the start of the year. Oh! And Yannick Carrasco came in for his first official appearance since he moved back from China.

In all fairness, this was a hungrier version of Atleti than we’ve seen in weeks. But greatness couldn’t be sustained. Not even for 90 minutes. It took Angel Correa just six minutes to slot the ball beyond Aaron Escandell after a pass from Koke, a strike that was followed by 84 minutes of uneventful football.

99 – Jan Oblak has kept 99 clean sheets in 176 appearances in @LaLigaEN and he could be the fastest goalkeeper to reach 100 clean sheets in the competition’s history. Ace. pic.twitter.com/Efle3RI505

Predictions on what will happen when Liverpool visit Atleti for the Champions League in less than ten days?

Valencia lost 3-0 at Getafe, which confirms Getafe as third in the table and that Valencia still haven’t found the right balance in their squad.

Real Sociedad won the Basque Derby on Sunday against Athletic Club, 2-1, with Alexander Isak scoring his 13th goal in 13 matches. Check out what we had predicted for this game …

Sevilla lost 1-2 to Celta Vigo and are beginning to slide in the table, after one win in the last five.

Here is the LaLiga table in full! See you next weekend for all the action from Spain. Make sure to bet with 22Bet!