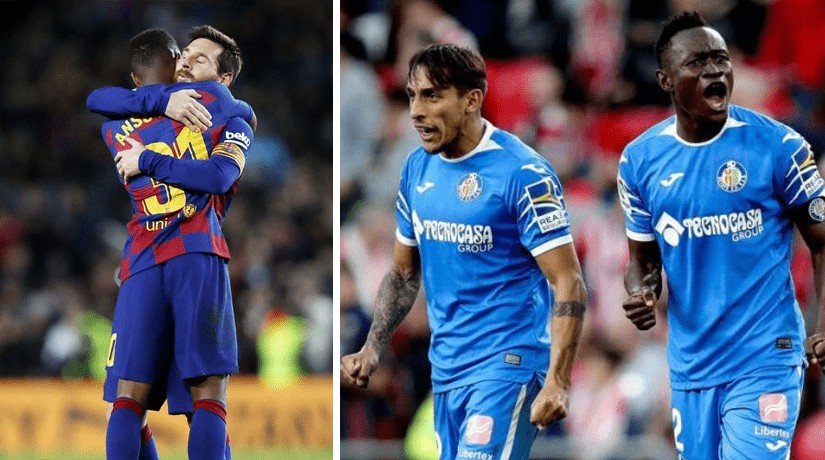 La Liga offered us one of Europe’s biggest derbies as Real Madrid beat Atletico Madrid 1-0 at the Bernabeu on Saturday. Read the full match report of the Madrid derby, or stick around for a quick breakdown of what happened in the rest of Spain this weekend.

Barcelona beat Levante 2-1 at Camp Nou on Sunday and we can’t get over their new child-prodigy, insane-wunderkind Ansu Fati, who scored a double for Quique Setien’s team.

The *really, really good* 17-year-old youngster cannot possibly get all the credit, however. Both of his goals, which were one minute apart, came from two masterful assists by no other than Lionel Messi. The Barca veteran struggled to find space to create chances for himself, so he decided to award Fati will the assists.

The first one, which should be nominated for Assist of the Season in Europe, was a beautiful through ball from the half-way line, a long cross that deservedly concluded in the back of the net. A minute later Messi gifted Fati with another assist that led to Barca’s second strike.

Levante got their consolation goal two minutes into extra time from a corner kick that landed in Ruben Rochina’s feet way outside the penalty box. With a deflection or two, the Levante forward smashed the ball into Marc-Andre ter Stegen’s goal from 30-yards out.

Quick side note: Antoine Griezmann, who?

1 – @FCBarcelona_es‘ Ansu Fati (17 years and 94 days) has become the youngest player to score a brace in @LaLigaEN in the 21st century, breaking the record previously held by Juanmi Jiménez against Real Zaragoza in September 2010 (17y 115d). Spectacular. pic.twitter.com/mBtK6ygr9C

Persistent Getafe climbed up to the third position on the La Liga table after a 2-0 win over Athletic at San Mames on Sunday.

Damian Suarez put Getafe one up in the 36th minute thanks to a masterclass in a team build-up to a goal. This was his first strike from open play in his 202 La Liga games; the Uruguayan’s three previous goals all came from set-pieces.

Shortly into the second half, Joss Bordalas’ men were awarded a penalty after some dramatic VAR intervention (as if VAR could make an appearance without any drama)… Athletic right-back Lekue was punished for a handball and Getafe star Jaime Mata converted the penalty to seal the final score.

3 – Athletic Club have conceded three penaltis in their last two games in all competitions (two vs Tenerife in Copa del Rey & vs Getafe in @LaLigaEN), as many as their preview 50 official games. Inertia#LaLigaSantander pic.twitter.com/bIlImYwaH4

Sevilla reached a hard-earned 1-1 draw at home against Alaves on Sunday. Even though they had 74.2% possession rate (their most recorded in La Liga this season) Julen Lopetegui’s men could not overcome Alaves, who opened up the game with a Joselu goal in the 70th minute. Lucas Ocampos converted a penalty for Sevilla seven minutes later to level against the visitors.

Valencia overcame Celta Vigo at the Mestalla on Saturday thanks to a single goal by Carlos Soler in the 77th minute.

*league standings not updated on graphic

Here is the La Liga table and results of matchweek 22, and we’ll see you next week for more action from Spain! Make sure to bet with 22Bet!