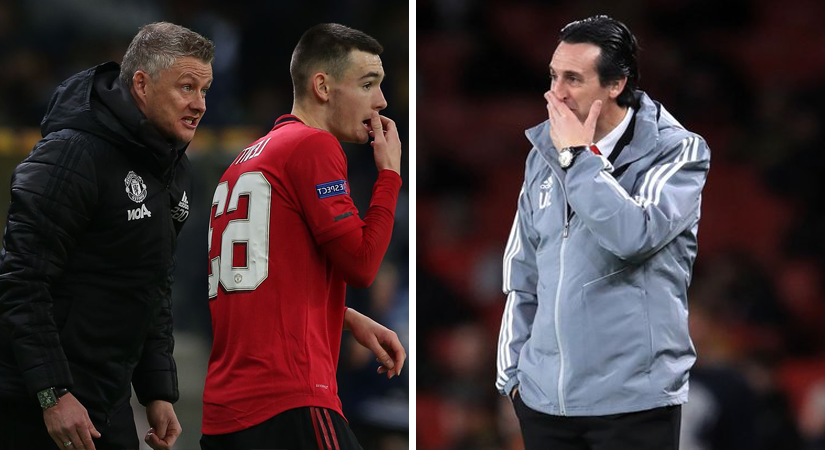 Europa League group stages are coming to an end, with match week 5 concluded. Check out our round-up, as well as some of the most memorable moments.

Arsenal lost 2-1 at home to Eintracht Frankfurt on matchday five of the Europa League, with head coach Unai Emery getting the sack as a result.
Despite the defeat, Arsenal stays top of Group F and only need a point from their next game after Standard Liege and Vitoria de Guimaraes drew 1-1 in Portugal.

Manchester United also suffered a shock 2-1 defeat to Astana, but still qualified for the knockout round after Partizan Belgrade drew 2-2 with AZ Alkmaar.
United face Alkmaar at Old Trafford next week with the winners topping group L.
Wolves also secured their qualification for the knockout round with a 3-3 draw in Braga.
Wolves face Besiktas next, who beat Slovan Bratislava 2-1, knowing they need to better Braga’s result to top group K.
In group G, Rangers need to avoid defeat at home to BSC Young Boys next week in order to secure their qualification for the next round, after drawing 2-2 away at Feyenoord.
Both FC Porto and Young Boys know a win will see them qualify next week, after Porto beat the Swiss side 2-1 in Bern.

In group E, Celtic secured top spot with a 3-1 win over Rennes at Celtic Park, while CFR Cluj lost 1-0 away to Lazio.
Elsewhere, Sevilla extended their lead at the top of group A with 2-0 win over Qarabag, with APOEL Nicosia securing second following a 2-0 win away at F91 Dudelange.
In group B, FC Copenhagen went a point clear at the top after a 1-0 away win against FC Lugano.
Malmoe FF went second with a 4-3 home win over Dynamo Kyiv, with the top two facing off in Copenhagen next week.
In group C, Getafe and FC Krasnodar set up a winner takes all match up in Madrid next week, after they both secured wins.
Getafe beat Trabzonspor 1-0 away, while Krasnodar won 1-0 at home to FC Basel 1893, although Basel stay top.
Sporting CP secured their progression for the next round with a 4-0 home win over PSV Eindhoven, while LASK moved second in group D with a 1-0 away win against Rosenborg.
LASK have also guaranteed qualification for the knockout round by virtue of their head to head record against PSV.
In group H, Espanyol secured top spot with a 2-2 draw away to Ferencvaros, while a 1-1 draw with CSKA prevented Ludgorets Razgrad all but guaranteeing their progression.
Ludogorets face Ferencvaros at home next week, with Ferencvaros needing a win to secure qualification for the next round.
In group G, Gent and Wolfsburg secured qualification for the knockout round, after Wolfsburg beat FC Olexandriya 1-0 away and Gent drew 1-1 with Saint-Etienne in France.
Finally, Borussia Monchengladbach topped group I with a 1-0 win at Wolsberger AC, while Roma moved into second with 3-0 win at Istanbul Basaksehir.
Roma face Wolsberger next, with Basaksehir facing Monchengladbach, with the Turkish side needing a win to guarantee their progression.

Make sure to bet on Europa League with 22Bet!