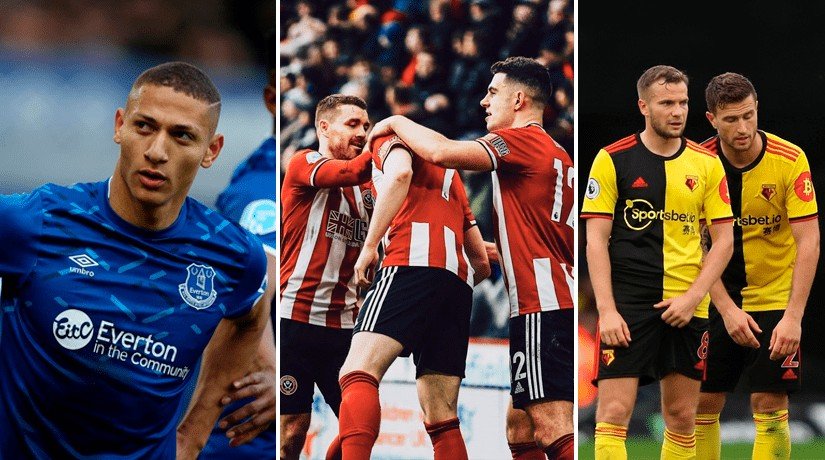 It’s strange times in the Premier League as matchweek 26 is spread across two weekends, and with Man City vs West Ham being postponed due to bad weather we only had three fixtures to watch. Here is what went down.

Carlo Ancelotti’s momentum at Everton continues. His men, who were in the relegation zone two months ago, are now three points off Top Five after beating Crystal Palace at home on Saturday.

Bernard opened the scoreline in minute 18 after a ridiculous(ly sick) assist from Theo Walcott. But Palace responded and the second half saw Wilfried Zaha set up Christian Benteke for his first goal in almost ten months, only the second in 39 appearances. The strike went between Jordan Pickford’s legs, which did nothing to help the goalkeeper, who was having a terrible game overall.

Then Everton hero Richarlison did his magic. The Brazilian carried the ball from the center line and produced an inch-perfect stunner in the right corner of Palace’s goal. Ancelotti’s men finished off with a strike by Dominic Calvert-Lewin two minutes before time, for his sixth goal in eight Premier League appearances.

6 – Since Carlo Ancelotti’s first Premier League game in charge of Everton, only Sergio Aguero (7) has scored more goals in the competition than Dominic Calvert-Lewin. Super. #EVECRY

The skies cleared over Bramall Lane mere minutes before kick-off and the stage was set for Sheffield United’s 2-1 triumph over Bournemouth on Sunday.

Callum WIlson put the visitors ahead, but it’s all level at the break thanks to Billy Sharp’s equaliser#SHUBOU pic.twitter.com/d6JE0wpiLk

Callum Wilson scored the opener for the visitors from a fast-pace, close-range power kick into the back of the net for his eighth goal of the season.

The hosts responded in injury time of the first half when Billie Sharp did what he does best: score goals for Sheffield United.

34 – Each of Billy Sharp’s last 34 league goals have been scored from inside the box, in a run dating back to October 2017. Proximity. pic.twitter.com/Do3aMO90HE

There was a pinch of drama on the sidelines as Sheffield boss Chris Wilder got into a scramble with Bournemouth’s midfielder Andrew Surman over nothing … and both got booked. Sheffield United scored the winner thanks to John Lundstram’s pace and skill six minutes before time.

Defeat in Sheffield this afternoon, thank you for your support. #afcb🍒

“Europe is not something we’re thinking about,” said Wilder. Well, that’s weird considering you’re fifth on the table, Chris!

Brighton drew Watford at home on Saturday in a forgettable clash, whose highlight is Adrian Mariappa’s fantastic goal – into his own net.

6 – Since the start of last season, Watford have conceded six own goals in the Premier League, more than any other side. Nervy. #BHAWAT

Abdoulaye Doucoure made a run through his opponents’ half to produce a superb strike in the right corner of Brighton’s goal after Albion’s defense decided to go on a coffee break 19 minutes into the game.

But The Seagulls came back strong in the second half and their constant persistence was awarded by Mariappa’s unsavable own goal, which he blasted into his own net in the 78th minute to gift Brighton the equalizer.

Here are the final standings at the end of Part One of matchweek 23. See you next weekend for the second half and stay tuned to find out when the postponed Man City vs West Ham clash will take place. Make sure to bet with 22Bet!