Welcome to our UEFA Champions League final prediction article. The 2021 Champions League final is another all-English affair as Premier League teams Manchester City and Chelsea clash. The match to decide this season’s kings of Europe is scheduled for Saturday with a 20:00 GMT kick-off. The action will be broadcast live to a global audience on several major television stations, with fans in the UK tuning in to BT Sport for the build-up to the match and final, followed by post-game analysis.

This weekend’s final will be the first involving two clubs from the English Premier League since Liverpool’s win over Tottenham in 2019. It’s only the second since Man Utd and Chelsea met at the Luzhniki Stadium, Moscow, in 2008. This clash of the Cityzens and the Blues was originally set to be played in Turkey but was recently moved to the Estadio do Dragao in Portugal due to COVID-19 safety concerns. Will that move change your predictions on the Champions League final?

Saturday’s final will be the 66th edition of the world-famous football tournament organised by UEFA. After fighting off a mutiny from the proposed European Super League just weeks ago, organisers will be desperate to put on a show. Bayern Munich entered the Champions League group stages as the defending champions, but the Bundesliga outfit was knocked out at the quarter-final stage by French club PSG. Read on for our Champions League final 2021 prediction.

Before making a Champions League final prediction, it’s important to know the lineups expected from both clubs. This information will be a closely guarded secret by Pep Guardiola and Thomas Tuchel until the last minute, but we can take clues from recent matches involving the Premier League pair.

Who will win the Champions League 2021 final? The answer to that question will be the manager that fields the better team and enjoys a generous helping of good fortune from the sporting gods. In other words, it’s anyone’s guess at this stage. But it’s a mystery our team of sports betting experts are eager to help you solve, and we begin our mission to beat the bookies by investigating the possible starting lineup of each team. 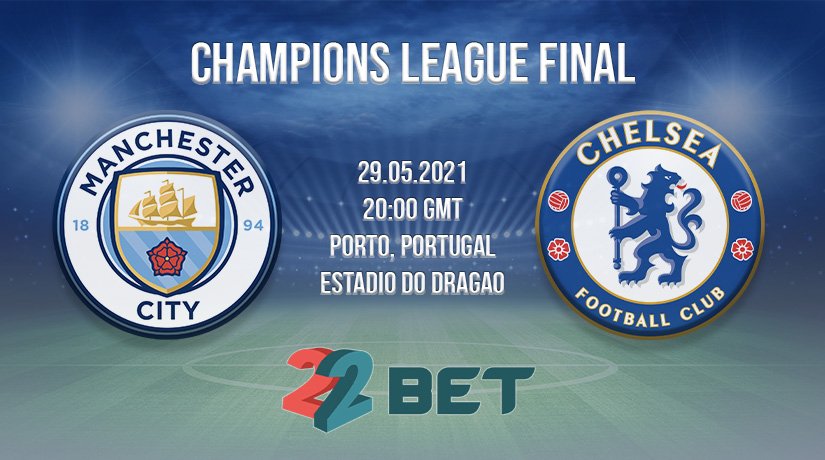 The 2021 Champions League final involves two sides who are accustomed to facing off in competitive action. So there’s plenty of information to go on, including past matches, head-to-head, recent form and more. This season alone, followers of English football have watched three games involving Man City and Chelsea. The standard two in the Premier League and the spare in the League Cup.

Let’s take an educated guess at the starting 11 for the 2021 Champions League final. The most recent clash was played at the Etihad Stadium on Saturday 8 May, and the two teams lined up as follows;

The UCL Final 2021 will be the 167th match involving Man City and Chelsea. The overall head-to-head stats show Chelsea have 68 wins against the 58 of Manchester City with 40 games ending in a draw.

There won’t be too many more important matches than this one, and that is reflected in the Champions League betting odds, with traders and pundits struggling to nail down a clear favourite for victory.

Focusing on the most recent games, we note Chelsea have won two of the three this season, with Man City taking one. The Cityzens won 3-1 in London back in January in the league before Chelsea fired back to sneak a shock 1-0 at Wembley in the FA Cup. Blues then won 2-1 at the Etihad Stadium in the Premier League on 8 May.

Sticking with the trends and we expect a competitive but high-scoring match. Both teams have found the net at least once in four of the last five games. Keep that one in mind when making your Man City vs Chelsea Champions League final prediction.

Let’s get down to the serious business of making our predictions for the Champions League final on Saturday. There’s no doubt this will be a fiercely competitive contest,but the fact both teams are so familiar with each other allows them to bypass the ‘feeling out’ period. Man City and Chelsea can get right down to business at the first whistle.

That will make for a great spectacle, especially for armchair fans watching the action on live TV. We can take heart from the scoring stats and hope this one falls into line with both teams able to find the net and keep things competitive.

The fact Chelsea have beaten Man City in each of their last two games, including once at a neutral venue, pushes us towards the Londoners. Chelsea has also beaten City in three of the last four games, so have proven they can do it. Despite many experts predicting the outcome of the Champions League final as a Man City win, we’re with Chelsea.

A decent correct score is slightly easier to make in this match, and that’s for a couple of reasons. Firstly, we expect a competitive final. Most Champions League finals are, and one involving two teams from the same league ought to be.

Secondly, the stats give us something strong to work off. The correct score in three of the last five games involving these teams has been 2-1 to either side. You can try 2-1 Chelsea, 2-1 Man City or a bet on both teams to score.

This is the Champions League final, so we’ll get nothing for free from this game. It’s going to be difficult to crack. What we can do is take heart from the form and stats to make an informed tip, and that’s Chelsea to win. Those after a bigger price can try both teams to score (BTTS), and Chelsea win or Chelsea 2-1 in the correct score. 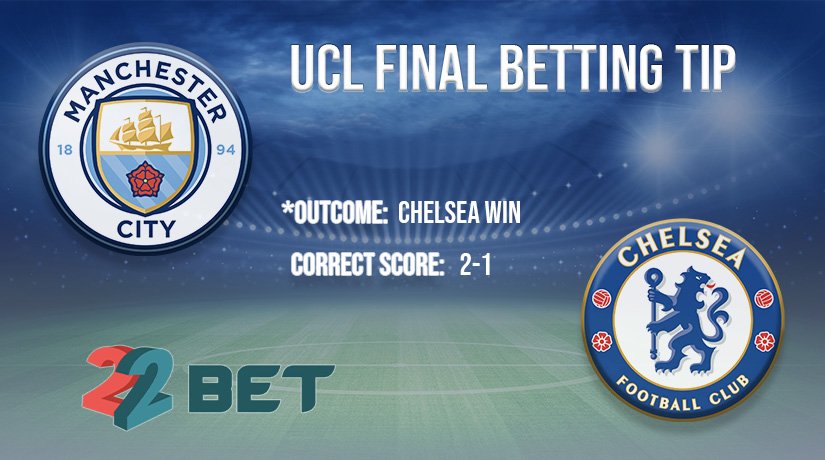 You’ll find a long list of betting markets available at 22Bet on this fixture. There’s something to suit all types of bettors looking to mark the gala event and highlight of the club football calendar with a wager on the outcome. Bettors can predict the team they expect to win the match, or they can go with one of the many specials on offer.

How will the team win? In 90 minutes, extra-time penalties. You can cover yourself for all eventualities by picking Chelsea or Man City to lift the trophy. It then doesn’t matter how they do it as long as they are the team with the trophy aloft at the end.

There are markets that allow you to place a bet on this game even without predicting the winning team. The most popular of these include the first goalscorer, anytime goalscorers, total goals, handicap, total goals, total cards, total corners and half-time/full. Visit the 22Bet betting site and browse what’s available to you as a member.

If you aren’t already a member of 22Bet, it’s the perfect time to sign up and take advantage of the Champions League betting.

When is the Champions League final this year?

The Champions League final date is Saturday, May 29th. After many discussions, it was decided that the location of the final would be moved from Turkey to Portugal.

What time is the Champions League final?

The winners of the Champions League will be crowned around 22:00 GMT if extra time isn’t required. The European Cup final will kick off at 20:00 GMT +1, which is a kick-off time of 22:00 GMT+3. Meanwhile, the final has the same kick-off time as the Europa League final, which takes place on Wednesday.

Where will Man City vs Chelsea take place?

The venue for the final was changed due to travel restrictions imposed by the British government. The stadium that will be hosting the 2021 Champions League final is the Estadio do Dragao in Porto.

Can I buy tickets for the game?

Tickets for the final went on sale after the semi-finals. However, the applications for tickets are now closed.

How do I get the Champions League final tickets?

Tickets for the biggest club football game are now sold out. There was an allocation for both Premier League sides, as well as UEFA’s official partners. Both clubs were allocated 5,850 tickets each, but these quickly sold out after going on sale.

Where to watch the UEFA Champions League final?

The schedules for television viewers were determined at the beginning of the season. All fixtures throughout the season, including the group stage have been aired exclusively on BT Sport. The final will also be live on BT Sport.

As well as the BT Sport channel, the final will be shown live for all viewers on the BT Sport YouTube channel. This is the second successive season that the TV channel has allowed the match to be watched on the streaming site.

Who will be the referee for the Champions League 2021 final?

The referee for this H2H meeting will be Spanish official Antonio Mateu Lahoz.

Who is the most likely to win?

The current favorites according to the odds are Manchester City. Pep Guardiola will be hoping to win the title for the first time with City, ten years after his second success with Barcelona. Thomas Tuchel will once again go into the final as the outsiders, but many betting tips are expecting a strong showing from the Blues, as they have beaten City twice under the German.

What are the Champions League final odds?

You can find all the latest odds for the showpiece event at 22Bet. The leading sportsbook will offer markets on the correct score, BTTS and over/under markets. The bets will be settled after the results have been made official. Meanwhile, customers can expect to claim free bets with 22Bet.