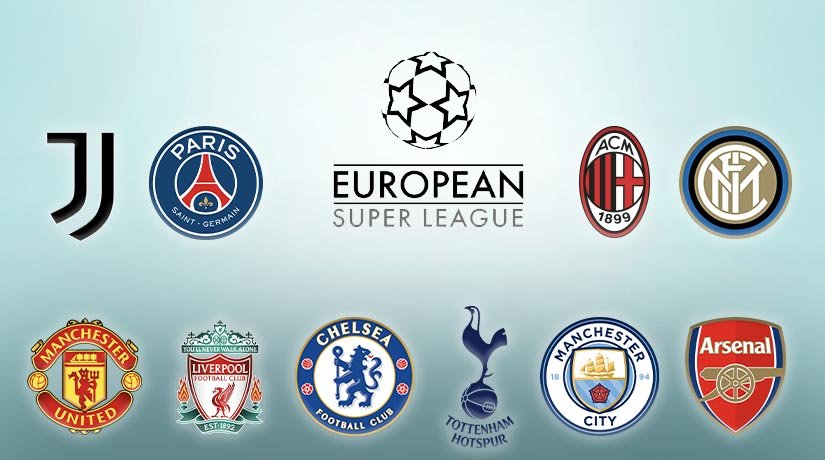 The leading clubs in England, Spain, and Italy have angered the footballing community over the past weekend after official plans to form the inaugural European Super League (ESL) seem to have been agreed in principle.

The announcement sent shockwaves around Europe, as it could potentially mean the end of the beautiful game as we know it. But, which sides are involved in the breakaway, and what have the responses been from the governing bodies that run the game?

Which Sides Are Involved?

Organisers of the ESL are hopeful of getting the 20 biggest clubs in Europe to sign up for the inaugural competition, which could take place as soon as next season. Manchester United, Manchester City, Chelsea, Liverpool, Arsenal, and Tottenham Hotspur are the six English sides that have agreed to join the lucrative league. Spanish giants Real Madrid, Atletico Madrid, and Barcelona have also signed up.

Juventus, Inter Milan, and AC Milan are the Italian trio that have agreed to pull away. As yet, those 12 clubs are the only ones that have been announced, with Bayern Munich, FC Porto, and RB Leipzig assessing the situation according to the latest reports. PSG are another notable name that haven’t been included.

What Is The European Super League?

The European Super League is set to be the newest mid-week competition that will be open to teams invited to take part. It is widely believed that the competition will run in unison to the domestic leagues that the sides are involved in, but backlash means that any chance of that happening without a fight looks unlikely. As well as a men’s competition, there is also believed to be a women’s competition in the works.

The 20 teams involved will be split into two groups of ten, with the top three from each automatically qualifying for the quarterfinals. The other sides that reach that stage will be decided by playoff matches between the sides that finish in fourth and fifth in the two respective groups.

What Has Been The Response?

It’s fair to say that the response to the announcement has been massively negative. Fans, ex-professionals, and leading journalists have all admitted that the introduction of the Super League could be deeply damaging to the game in Europe. UEFA and FIFA were also quick to issue statements, with the latter claiming that players involved in the breakaway league could be refused the opportunity to represent their national sides in the World Cup and the European Championships.

One of the most damaging parts of the breakaway would be the fact that the competition would be a ‘closed shop’, with founding clubs automatically qualifying every season. Clubs that are considered the founders will get around £3 billion per season for their involvement, which has been condemned by many given the impact of the COVID-19 pandemic on the finances of clubs at the bottom of the pyramid.

What Are The Next Steps?

This story is likely to be one that will continue to develop with every passing day, with emergency meetings taking place at the major European leagues and UEFA. It isn’t much of a surprise that the announcement for the Super League was made on the eve of day where UEFA was to unveil plans for their revamped Champions League format. The Premier League has already been encouraged to impose massive fines and points deductions on the teams involved, but any announcement regarding that would be made in due course.

You will be able to stay up to date with this huge story on 22Bet News, as we will continue to stay on top of this fast-developing global story with huge implications on the sport that millions around the world love.