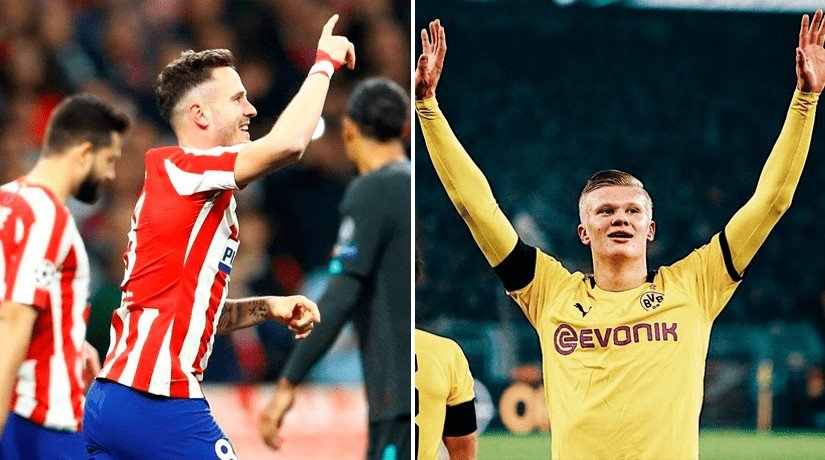 Champions League is finally back and we couldn’t be more ecstatic! Tuesday gifted us with two battles that delivered a composed first leg of the Round of 16. PSG traveled to Dortmund to lose 2-1, whilst Atleti hosted Liverpool and got beaten by a single goal. Here is what went down.

Liverpool returned to Wanda Metropolitano only for the second time, their first being their victorious Champions League final last year, and it’s fair to say that we all expected a more overwhelming clash than this single goal triumph for the hosts.

Atletico Madrid scored their winning goal four minutes in thanks to club hero Saul Niguez’s scrappy effort that made it past Alisson, giving Diego Simeone’s men an aggregate lead going into the second leg tie at Anfield.

Atleti’s infamous defense line didn’t even let Liverpool produce more than a couple of real chances, with no shots on target. Mohamed Salah and Jordan Henderson both came close, but neither made an impact on the scoreline.

“The best side in the world came here and we beat them”, said Simeone. “But it’s only one game down, one to go.” What are your predictions?

A frustrating night in Madrid. Back to Anfield for a big night 💪 #LFC #LiverpoolFC #UCL

BVB crushed PSG’s hearts as they beat the Parisiens 2-1 at Westfalenstadion, in what was by far the better of the two Champions League fixtures on Tuesday night.

10 – Players to score 10 goals in their first season in the European Cup/Champions League:

The game was predominantly dominated by Thomas Tuchel’s squad, and it didn’t truly start until the 69th minute when the Norwegian teenager produced a predatory finish into PSG’s goal. Neymar responded six minutes later with a tap in thanks to a gorgeous run by Kylian Mbappe. But it took just two minutes for Haland to net his left-footed rocket from 20 yards out for the winner.

He wasn’t the only 19-year-old to make an impression with Jadon Sancho also on the pitch. “Borussia have players that can make the difference. Jadon is a player that I really like to watch play and he is a great player with plenty of quality,” said Neymar after the match. “Borussia Dortmund is a team with plenty of quality players. They have a special player, who is new but who is very good, whose name is Sancho.”

Here are the final results of the first round of the Round of 16 between Atletico and Liverpool, and Dortmund and PSG. See you tomorrow for Atalanta vs Valencia and Spurs vs Leipzig. Make sure to bet with 22Bet!