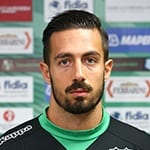 A product of the Atalanta football academy, Andrea Consigli was signed by the club in 2006 and was immediately loaned to Sambenedettese of the Serie C (3rd tier). The following year, he was loaned to Serie B’s Rimini.