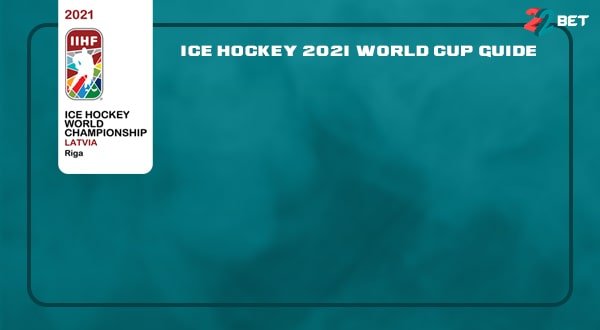 Sixteen of the world’s strongest ice hockey teams from three continents will take to the ice between May 21 and June 6 in Riga, Latvia to determine this year’s ice hockey world champion.

With the 2020 World Championship having been canceled due to the coronavirus pandemic, Finland will feature as the defending world champions, having won the title in Slovakia in 2019.

So when and where will the next Ice Hockey World Cup be held? Who are the current favorites? And at what odds can you back your favorite team?

Read this article to find out everything you need to know about the 2021 IIHF Ice Hockey World Championship!

Last year’s cup was supposed to take place in Switzerland, with the Hallenstadion in Zürich and the Vaudoise Aréna in Lausanne playing host.

However, on March 21, as the first wave of the COVID-19 pandemic was in full swing, the IIHF Council decided to cancel the event.

According to the official press release:

The decision was taken due to the ongoing coronavirus (COVID-19) pandemic. Given the current circumstances and following discussions with various stakeholders, the IIHF Council has determined that the 2020 IIHF Ice Hockey World Championship in Zurich and Lausanne cannot take place.

All fans who purchased tickets received full refunds. Initially, some believed that Switzerland would get to play host to the postponed 2021 event, but the Council of the International Ice Hockey Federation made a firm decision that the event was canceled, rather than just being postponed like the UEFA Euros.

The World Junior Championship and the lower division senior tournaments were also canceled.

This meant that Switzerland had no claim to hosting rights in 2021 and that the 2021 edition of the tournament would be held in Riga, Latvia.

Initially, the 2021 World Championships were supposed to be held in Riga, Latvia and Minsk, Belarus.

The international pair barely won the rights to host the tournament in the first place, their bid overtaking that of Tampere and Helsinki by just 3 votes.

However, due to the unrest caused by political repression enacted by Belarusian dictator Alexander Lukashenko’s regime over the years as well as fraudulent claims of victory in last summer’s elections, a multitude of European politicians called for a boycott of Minsk as a co-host.

After a long period of debate, the International Ice Hockey Federation made an official decision, stripping Belarus of the right to host any World Championship games due to safety and security issues.

At first, there was speculation that the tournament would instead be held in either Denmark or Slovakia, but the IIHF instead decided that the games would be held in two arenas in Riga, Latvia.

The IIHF Ice Hockey World Championship will be held in two arenas in Riga, Latvia between May 21 and June 6, 2021.

The first venue will be Arēna Rīga, which has a total capacity of 10,300 spectators. Latvia’s largest ice hockey arena, it was purpose-built for the 2006 IIHF World Championships.

Today, it is home to the Latvian ice hockey team and Dinamo Riga of the Kontinental Hockey League.

The arena will host all Group B games, 2 quarterfinal games, and all of the games starting from the semifinal stage. 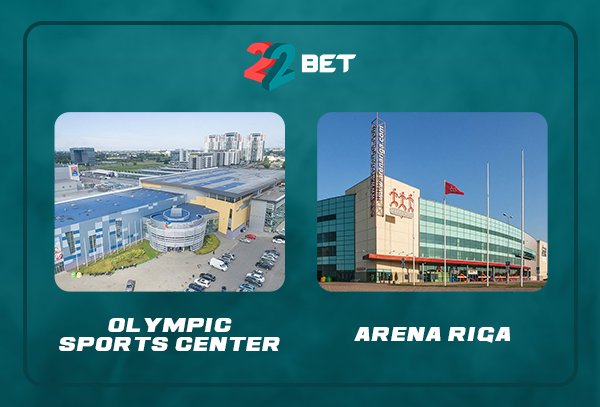 All Group A games will take place in the Olympic Sports Center, Group B matches in Arena Riga.

The second venue is the Olympic Sports Centre, which is located right next to Arēna Rīga. Built in 2005, the venue has a capacity of 6,200 spectators.

Being primarily a basketball arena, the main tenants of the Olympic Sports Centre are such clubs as VEF Riga (LBL), BK Latvijas Universitāte (LBL), and TTT Rīga (LSBL, EuroLeague Women).

The venue will host all Group A games as well as 2 quarterfinal games.

As of May 18, 2021, the championship is planned to be held without any fan attendance.

Some Latvian politicians – including those representing the Health Ministry and the Ministry of Education and Science – are currently proposing that a limited number of vaccinated fans may attend the playoff games.

As of right now, however, no changes have been officially announced.

And there are several large hurdles to allowing vaccinated fans into the venues.

Latvian health minister, Daniels Pavļuts, said in an interview that the main two problems with allowing vaccinated fans to attend the event are that:

Playing in a Bubble

The teams participating in the 2021 IIHF World Championship, including all players, coaches, and team staff, will stay in a single hotel.

All practices will be held at the newly-constructed Daugava stadium.

Travel from the practice facility to game sites will be by private-charter transport provided by “Rīgas satiksme”, a municipality-owned company that operates the vast majority of public transport in the city.

16 national teams from three continents will participate in the 2021 IIHF World Championship. The teams will be split into two groups as follows.

Group A will play all its games at the Olympic Sports Centre.

* The Russian men’s national team was disqualified due to doping and cannot officially compete in the tournament. Athletes from Russia are instead participating in the event as representatives of their Olympic team, which is typically responsible for fielding a team for the Winter Olympics

Group B will play all its games at Arēna Rīga. 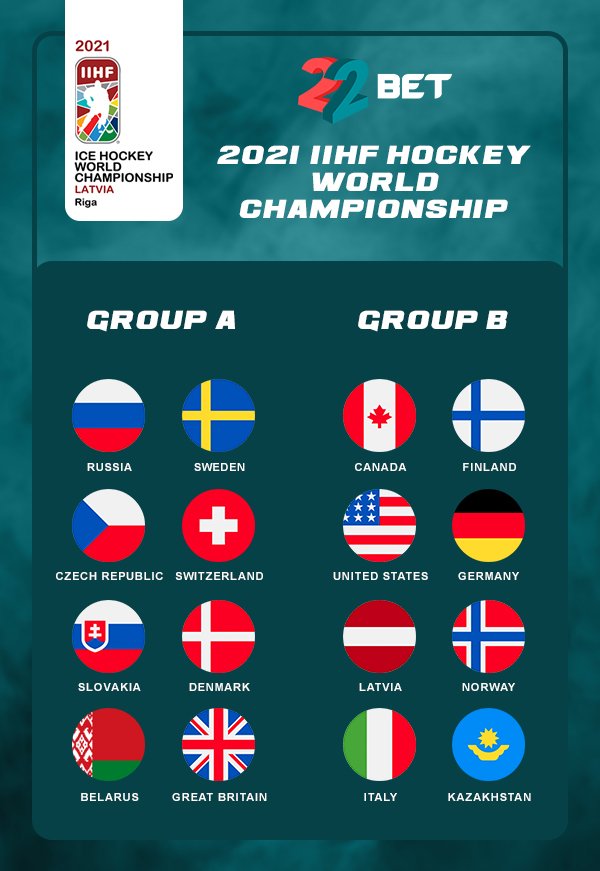 Groups A and B of the 2021 IIHF World Championship.

The quarterfinals will be held on June 3, with two matches starting at 14:15 and the other two starting at 20:15.

The winners of the quarterfinal games will advance to the semifinals.

The Russian Olympic Committee is the clear betting odds favorite, being available for an unimpressive 3.50 in the IIHF World Championship Winner market.

This is even though the Russian team hasn’t won gold since 2014.

Canada can be backed in the same market at a more lucrative price of 5.50. They are closely followed by Sweden at 6.50 and the Czech Republic at 8.00. The teams most likely to finish in top 3 or win, according to 22Bet odds.

Russia can be backed to get a medal at 1.45 odds. Such odds aren’t brilliant for betting on a single game, let alone a bet on final tournament results.

This tells us that the market is very confident in the Russian men’s national team, even though they only finished 6th two championships ago.

22Bet users can place wagers on over 50 pre-match and live betting markets. These include such staples as:

Fans of more fine-tuned bets can opt for: Total 1, Total 2, Next Goal, Race to, Even/Odd, Individual Total Even/Odd, Scoring Periods, When the Winner Will Be Determined, and Last Goal, Any Team to Win By, Result in Minute, Team to Score in Each Period, and Highest Scoring Period.

Those who want to receive even better odds and aren’t afraid of more obscure bets can wager on: Each Team WIll Score Over/Under, Handicap in Minute, Win or Draw in Minute, Total in Minute, Goal in Each Period, All Periods Total Under, Lowest Scoring Period Total, Team Not to Lose Any Periods, Both Teams to Score in Minute, and All Periods Total Over.

And that’s just half of the betting markets 22Bet offers. Check all of them out here.

All new 22Bet users are eligible to receive a lucrative, 100% deposit match bonus up to a whopping 122 EUR.

To receive the bonus, all you have to do is register an account and make your first deposit. 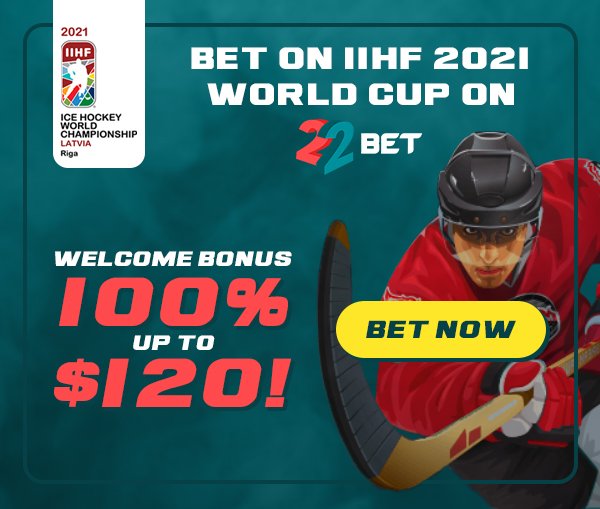 And that’s not it, on top of a lucrative bonus, players betting on Ice Hockey World Championship games will also receive 8% cashback on the sum of their total bets.

To qualify for the cashback, all you need to do is place an accumulator bet with odds of at least 1.8. 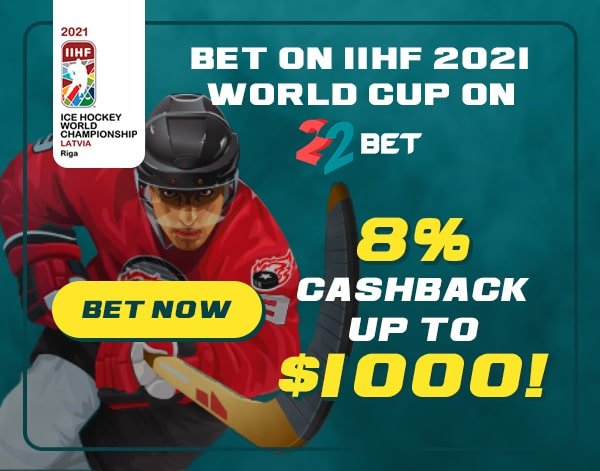 The World Junior Ice Hockey Championship was held in a bubble in Edmonton, Alberta, Canada between December 25, 2020, and January 5, 2021.

All of the games took place at Rogers Place, a hockey venue with a capacity of 18,500. The venue is home to the Edmonton Oilers of the NHL and their WHL affiliate, the Edmonton Oil Kings.

The United States beat Canada 2-0 in the finals, taking home the gold medal.

The bronze medal was contested between Finland and Russia. The Finns beat the Russians 4-1 in that game.

The 2021 IIHF U18 World Championship was held in the cities of Frisco and Plano in Texas, USA.

The main venue for the event was the 3,500 seat Comerica Center in Frisco, which is home to the Texas Tornado of the NAHL and serves as a practice facility for the Dallas Stars of the NHL.

The Canadian national team won gold in the tournament, beating Russia in the finals, 5-3.

The bronze medal game was contested between Finland and Sweden. The Swedes annihilated the Finns in the game, the final score reading 8-0.

Where to Watch the IIHF World Championship Online

TV and stream availability varies from country to country.

Americans can watch all of the games on the NHL Network. Canadians can tune in to watch the championship on TSN/RDS.

In Finland, the championship will be shown on the TV5 and Discovery+ TV channels. Users in Russia can see the matches on MatchTV.

And if you’re in Sweden, then svenskhockey.tv will have you covered.

And, regardless of where you live, you can stream all games via HockeyTV.com. The cost of the ability to watch online all of the games is $29.99. Check the full info here.

When will the next Ice Hockey World Cup be held?

The next IIHF Ice Hockey World Championship will be held in Riga, Latvia between May 21 and June 6, 2021.

Where is it taking place?

The 2021 World Ice Hockey Championship will be held in Riga, Latvia.

Why was the 2020 Ice Hockey World Championship canceled?

The 2020 IIHF World Hockey Championship was canceled due to the coronavirus pandemic.

Why was the location changed?

The tournament was originally scheduled to be held in Minsk and Riga. Minsk was stripped of its rights to host the World Championships due to safety and security concerns.

At which venues will the matches take place?

The games will be held at Arēna Rīga and the Olympic Sports Centre in Riga, Latvia. The venues are located less than 300 meters away from one another.

Which teams are the most likely to win?

What are the betting odds on the teams right now?

Russia is the clear favorite, being available at 3.50 in the tournament winner market and 1.45 in the top 3 market. Sweden, Canada, Finland, and Czechia are available at better odds.

When will the Ice Hockey World Cup final take place?

Where can I watch the IIHF World Championship 2021 online?

All games will be broadcasted online at HockeyTV.com.

Can I buy tickets to watch the matches in attendance?

No, you cannot. The World Cup will be held in a bubble without any fans.

Where can I bet on the men’s Ice Hockey World Cup matches?

22Bet is the perfect place to place bets on Ice Hockey World Cup 2021 matches. As a new player, you will receive a 100% bonus of up to 122 EUR. You can also take advantage of an 8% cashback offer on accumulator bets.

Can I bet on matches in advance on 22Bet?

Yes, you can bet on all IIHF 2021 World Championship games in advance at 22Bet.

Can I bet on the IIHF world championship games live?

Yes, 22Bet offers a wide selection of live betting markets for the tournament.

Can I bet on the finalists already?

Yes, you can place a bet on the tournament winner market right now.