Marc-André ter Stegen was born on 30 April 1992 in Mönchengladbach, Germany. At the age of 4, Marc-André entered the local Borussia youth system, where he stayed till the year 2010.

At the beginning of the same year Ter Stegen was named in the club’s reserve team. His debut came on 9 April in the 28th round game of the Regionalliga West against Wormatia Worms. The match ended in a 3-2 victory. Marc-André began the 2010/2011 season in the second team, wearing the number 1 shirt, but after the New Year break he was promoted to the Borussia M’gladbach first team. The club had some problems with goalkeepers, since Logan Bailly and Christofer Heimeroth’s performance held the team back.

The new manager, Lucien Favre, made a decision to entrust Ter Stegen with the position of the first-choice keeper. Marc-André opened his account with the senior team on 10 April 2011 in a 5-1 victory over 1. FC Köln. After that game the German established himself as the main goalkeeper of the club. Ter Stegen became an stalwart in Borussia’s goal and featured in 127 matches for the club. In 2014 his services were secured by Spanish giants Barcelona. Ter Stegen was called up as a senior international in a friendly against Switzerland during Euro 2012. Since then he has been called up to represent the national team.

Ter Stegen is of Dutch descent through his father. He married his longtime girlfriend, Daniela Jehle, on 15 July 2017 in Sitges, near Barcelona.

Born in Mönchengladbach, ter Stegen began his career at hometown team Borussia Mönchengladbach. In the first half of the 2010–11 season, he established himself as the star of their reserve team and was frequently seen on the first-team bench. Whilst he was enjoying a relatively successful season, the same could not be said for his first-team colleagues. Mönchengladbach’s senior side were seemingly failing in their efforts to avoid relegation, and on 14 February 2011, manager Michael Frontzeck was replaced by Lucien Favre, with the team rooted to the bottom of the Bundesliga, having accumulated only 16 points after 22 match days. Results soon improved, but the erratic form of first-choice goalkeeper Logan Bailly held the team back. Whilst he was able to produce match-winning performances such as the one against Werder Bremen, these were few and far between, and were frequently cancelled out by uninspiring matches.

The fans of Mönchengladbach were quick to discredit the Belgian international, with some accusing him of putting more effort into his modelling career than his football. Ter Stegen’s progress for the reserve team had not gone unnoticed by the supporters, and the new manager was inundated with demands to start the young prodigy in the league. Favre eventually lost patience with Bailly, and on 10 April 2011, relegated him to the bench in favour of ter Stegen for the match against 1. FC Köln. The young German did not disappoint, and the defence boasted a previously unseen solidity. He kept his place in the team for the remainder of the season, keeping four clean-sheets out of a possible five in the last five matchdays as Mönchengladbach avoided relegation via the playoffs. During this run, he shot to prominence with a last-man-standing display against eventual champions Borussia Dortmund, making a string of world-class saves as Mönchengladbach secured a famous 1–0 victory.

Ter Stegen’s status as first-choice goalkeeper was cemented when Bailly was sent on loan to Swiss side Neuchâtel Xamax and the no.1 shirt delegated to ter Stegen, who had previously worn 21. During the summer transfer window, Bayern Munich had succeeded in their drawn-out pursuit of Schalke 04’s captain Manuel Neuer. The German international made his debut against ter Stegen’s Mönchengladbach at the Allianz Arena. The match did not go the way the pundits predicted, however, with ter Stegen producing yet another inspired display whilst his counterpart Neuer made the error that condemned Bayern to a 1–0 defeat. Following this match, Borussia Mönchengladbach embarked on an unlikely title challenge, with ter Stegen and fellow youngster Marco Reus providing the inspiration for Mönchengladbach.

After the departures of Reus to Borussia Dortmund and Dante to Bayern Munich, ter Stegen emerged as Mönchengladbach’s main star for the season. He was again first-choice, and in February 2013, it was reported that ter Stegen signed a pre-agreement with La Liga club Barcelona. The deal was later denied by himself.

After being strongly linked to Barcelona, ter Stegen remained at Mönchengladbach for the new season. On 6 January 2014, he rejected a new deal from the club, raising the speculation over his future. In the last home match of the season, a 3–1 home success against Mainz 05 on 5 May, ter Stegen sent a tearful goodbye to Borussia Mönchengladbach.

On 19 May 2014, ter Stegen was announced as the new goalkeeper of Spanish club Barcelona, after the departures of Víctor Valdés and José Manuel Pinto, effective during the summer transfer window. On 22 May 2014, he signed a five-year contract that would keep him at the club until June 2019. The transfer fee was €12 million (£9.7 million), and the buy-out clause was set to €80 million (£63.6 million). After the move, ter Stegen said joining the club was the right move and that he aimed to settle at the club. Days after signing for Barcelona, ter Stegen was unveiled at the stadium of Camp Nou and dismissed his comparison to Valdés, insisting “I am who I am and that’s that”. Ter Stegen would suffer an injury prior to the first league match of the season. Due to this injury, Barcelona manager Luis Enrique made Claudio Bravo the starting league goalkeeper, where he would go on to win the Zamora Trophy.

His second season opened with victory in the 2015 UEFA Super Cup against Sevilla FC in Tbilisi on 11 August. Having led 4–1, he then conceded three more goals to send the match into extra time, in which Barcelona won 5–4. He made his La Liga debut on 12 September 2015 in a match against Atlético Madrid, which Barcelona won 2–1. In March 2016, ter Stegen said on the subject of Luis Enrique’s rotation policy: “In the long run, these 25 games per season are not enough for me. The decision is made by the coach. I hope that the quality I’ve shown recently is rewarded.”

Ter Stegen picked up injuries at the start of the season, due to which he missed the Supercopa de España and league matches. He became Barcelona’s first-choice goalkeeper after Claudio Bravo left for Manchester City on 25 August 2016. On 13 September 2016, ter Stegen gave away and saved a penalty from Moussa Dembélé which kept the score at 1–0 and which eventually led to a 7–0 victory for Barcelona against Celtic in the UEFA Champions League. On 2 October 2016, ter Stegen had a poor performance when he made two crucial mistakes, which cost Barcelona the match, as they eventually went on to lose 4–3 against Celta de Vigo. He later apologised and said that he would not change his playing style.

He later received good reviews for his role in the 6–1 Barcelona comeback in the Champions League for receiving a crucial foul from Marco Verratti in the opposition half – which led to the crucial 94th-minute winner that kept Barcelona in the hunt for the Champions League. As a result, Barcelona qualified for the quarterfinals of the 2016–17 UEFA Champions League. Ter Stegen proved to be even more decisive in the second league Clásico that year by producing a staggering 12 saves in a victory against rivals Real Madrid, which kept Barcelona alive in the race for La Liga while being three points adrift of Real Madrid.

On 29 May 2017, ter Stegen signed a new contract with Barcelona, keeping him at the club until 2022, with his buyout clause raised to €180 million. 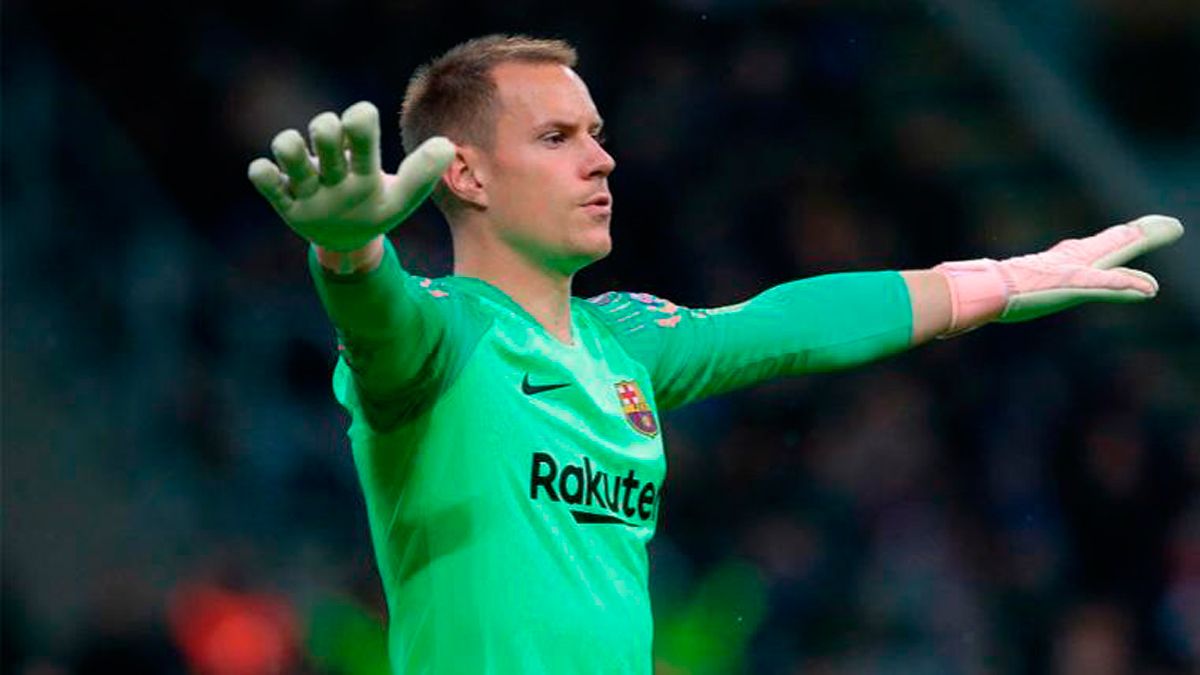 On 14 October 2017, ter Stegen made some critical saves, including two well-placed shots from Antoine Griezmann of Atlético Madrid, en route to a 1–1 draw at the new Wanda Metropolitano stadium, preserving Barcelona’s unbeaten record in the 2017–18 La Liga season. On 28 October 2017, ter Stegen produced a phenomenal display against Athletic Club in an eventual 2–0 win for Barcelona, denying Aritz Aduriz from a one-on-one position and producing a brilliant diving effort from the same opponent with five minutes remaining on the clock. As of 20 November 2017, ter Stegen, assisted by the guidance of manager Ernesto Valverde, along with the good form of teammate Samuel Umtiti, was responsible for Barcelona having the fewest goals conceded of any club in Europe’s top five leagues, with just four conceded.

On 22 November 2017, ter Stegen saved a 90th minute shot from Paulo Dybala of Juventus, which was similar to a shot he had scored against ter Stegen in the previous year’s Champions League. The result was good enough to secure a draw and a first-place position in Group D, qualifying Barcelona to the 2017–18 UEFA Champions League knockout phase. At this point, ter Stegen had saved 23 of his last 24 shots on target for a 96 percent save percentage. Ter Stegen started for Barcelona in the 2018 Supercopa de España, in which the club defeated Sevilla 2–1 to win the title with Ter Stegen making a late penalty save to secure the victory.

In 2009, he participated on the winning team of the UEFA European Under-17 Championship. Ter Stegen was rewarded for his performances by Joachim Löw, who called him up to Germany’s provisional squad for UEFA Euro 2012. He made his debut on 26 May 2012, in the 5–3 loss against Switzerland in a friendly match, but did not make the final cut for the tournament. He stopped a penalty from Lionel Messi in his second international match in a 1–3 loss against Argentina on 15 August, immediately after coming on following Ron-Robert Zieler’s sending off. On 27 June 2015, he conceded five goals in Germany U21s’ match against Portugal U21 in the semi-finals of the UEFA European Under-21 Championship in Czech Republic.

Ter Stegen was included in Germany’s UEFA Euro 2016 squad, but remained on the bench throughout the entire tournament, as a back-up to starter Manuel Neuer; Germany reached the semi-finals, and were eliminated following a 2–0 loss to hosts France. At the 2017 FIFA Confederations Cup, Ter Stegen started in all of his team’s matches, apart from the first group-stage match, as Germany went on to win the tournament. For his performance in the final, against Chile, he was named the Man of the Match. On 15 May 2018, Ter Stegen was included in Germany’s 27-man squad for the 2018 FIFA World Cup. Germany’s manager Joachim Löw included Ter Stegen in Germany’s final 23-man squad for the World Cup on 4 June 2018.