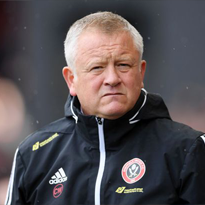 Christopher John Wilder is an English professional football manager and former player who played as a right back. He is the manager of Premier League club Sheffield United.

After retiring, he became a manager and was in charge of Alfreton Town, Halifax Town (their last manager before liquidation), Oxford United and Northampton Town before his appointment at Sheffield United. He won promotion from the Conference Premier with Oxford via the play-offs in 2010, from League Two as champions with Northampton in 2016, from League One with Sheffield United as champions in 2017, and from the Championship with the same club two years later.