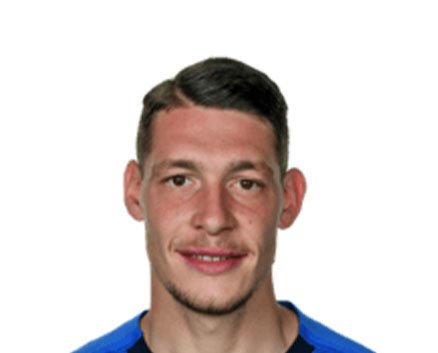 Andrea Belotti was born on 20 December 1993 in Calcinate, Italy. After failing a trial for the Atalanta youth team, he spent his early years in the AlbinoLeffe youth club system.

Belotti is widely known by the nickname Il Gallo, which is Italian for rooster.

In 2017, he married his girlfriend Giorgia Duro.

Andrea Belotti made his debut appearance for the senior club of AlbinoLeffe in 2012. In total, he made 8 Serie B appearances during the 2011-2012 and scored 2 goals.

He played the entire 2012-2013 season for the club, making a total of thirty-one Lega Pro Prima Divisione appearances and scoring 12 goals.

In 2013, Belotti was loaned to Serie B’s Palermo. Following a successful season, Palermo, which had just been promoted to Serie A, bought out Belotti’s contract.

Belotti made his Serie A debut in 2014, playing a total of 38 games and scoring 6 goals.

Following a good year with Palermo, Andrea Belotti was signed to a €7,500,000 contract by Serie A’s Torino. In his first season with the club, he made 35 appearances for the club and scored 12 goals.

2016–17 was a season of firsts for the player. In August, he scored his first Serie A hat-trick in a match against Bologna. In December, the player received his first contract extension when Torino signed him for another 4 years. March marked the first time Belotti was named team captain in a match against Palermo. During that very same match, Belotti scored the fastest Serie A hat-trick in nearly 20 years. Scoring a total of 26 goals during the season, Belotti entered the record books as the third highest scoring player in Serie A that season.

During the 2017–18 season, Belotti became the team’s permanent captain, a position he continues to hold to this very day. However, due to suffering several injuries, Belotti only managed to score a total of 10 goals during the season.

The 2018–19 campaign went a lot better for Belotti and Torino. The striker scored a total of 15 Serie A goals, helping his club qualify for the UEFA Europa League. At the end of the season, he was given the club’s Player of the Year honors.

Belotti made a total of 33 appearances for the Italian youth national youth teams, including 18 starts and 9 goals at the U21 level.

He represented Italy in the 2015 UEFA European U21 Championship.

Belotti made his national team debut on September 1, 2016. In his 27 starts for Italy, he scored a total of 27 goals.