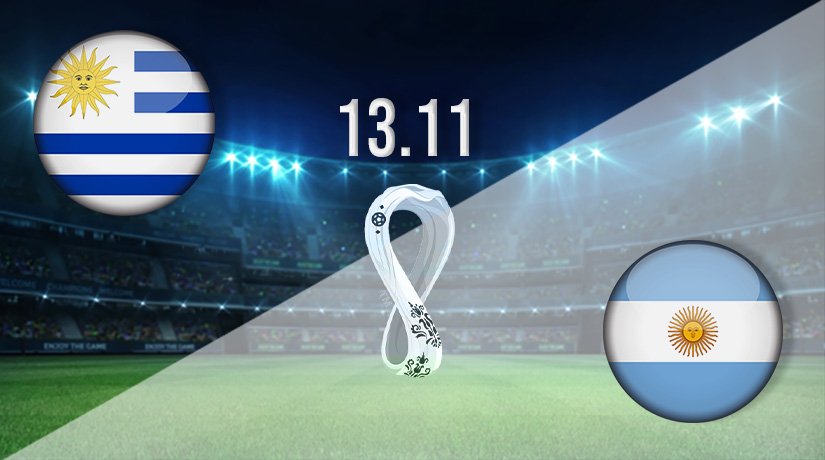 Friday night football, and there’s plenty for football fans to get excited about with the return of the World Cup 2022 qualifiers taking centre stage. Many of the top games will be shown live on television, including the feature of this preview which sees Uruguay and Argentina face off from 23.00 GMT. In an unrivalled spot, this game is sure to draw a huge audience with armchair fans out to catch a glimpse of some of the best players in the game. Qualifying in South America is hotting up, but will we see Uruguay or Argentina boost their chances of playing in Qatar next November with a win?

These nations rank amongst the best in the continent and on planet football, and an entertaining match awaits those planning to stay up late to follow the progress of this qualifier. The teams and their best players are no strangers to meeting on the big stage and rarely serve up a game that is low on drama. That familiarity allows Uruguay and Argentina to get down to business. There will be tension in the air as the teams take to the park, but the players can bypass the feeling out or sparring process and set about winning the points.

When studying the stats associated with this fixture, we see Uruguay and Argentina have met 36 times already, with Argentina enjoying the lion’s share of wins. They have 18 victories against their name, with Uruguay entering this match with just eight previous wins and ten matches ending in a draw. The most recent clash came back in October when Argentina eased to a comfortable 3-0 victory. That will give the visitors confidence ahead of this renewal, and fans will expect to see another win.

Uruguay are without a win in three

Unlike World Cup qualifiers from other continents, the South American section has all teams in one large league. A total of 10 teams are involved, with the highest finishers qualifying for the World Cup and the best of the rest entering the playoffs. The latter could be Uruguay’s best hope of making it to Qatar next year, and even bagging a playoff slot will be a big ask. The home team are currently fifth in the list and are winless in their last three games, a barren spell that could end up costing them their place.

Uruguay have played a dozen games so far, winning four, drawing four and losing four. They have scored 14 goals but conceded 17, which have both caused their downfall. When looking closely at those numbers, we see Ecuador in third have found the net 20 times while Paraguay down in seventh have conceded the same number of times as Uruguay. A shot-shy attack and a leaky defence has the team clinging desperately to their chances of making it through with time running out.

The home team have taken just one point from the last nine available to them, following a draw with back to back defeats in their last two. Confidence is low in the camp, and with 16 points on the board, Uruguay know this is a must-win match if they are to stand any chance of making it to the prize places. Ecuador in third are only a point better off at this stage, but leaders Brazil have 31 and Argentina in second have 25. The pressure is on.

Argentina make this trip sitting second in the league table, hanging on to the coattails of leaders Brazil. They remain in the mix and could challenge the Samba Boys by winning this game and cranking up the pressure. The pool has already taken shape, and it looks like Brazil will hold their ground, with Argentina crossing the finish line as the best of the rest, securing an automatic spot at the World Cup that will begin next November. Will there be a grandstand finish with Argentina racing into pole position near the end, or are they happy with their current spot?

They are unbeaten in the league so far, with seven wins and four draws from their opening 11 games. Argentina have scored 19 goals and conceded six, which rates as the second-best defence behind the four leaked by Brazil but the third-best attack after the leaders and Ecuador. Their form from the last five games consists of four wins and a draw, winning each of their two most recent outings.

The visitors played three times last month and kept a clean sheet in each game which will do wonders for the team’s confidence. That run began with a goalless draw away to Paraguay before hammering Uruguay 3-0 and edging Peru 1-0. It’s worth noting that Argentina have kept their opponents at bay in each of their last four outings, with Venezuela the last team to break their resistance in a game that ended 3-1 to Argentina back in the summer. That solid backline will be expected to stand their ground again here.

Argentina are favourites to win this match with many respected pundits, and it’s easy to see why. So far, they are unbeaten in the league and haven’t conceded a goal in three games, picking up seven points from the last nine available. That purple patch includes an emphatic win over Uruguay, and it’s no surprise to see many football fans are sticking with the form team when making their predictions.

Uruguay aren’t in trouble yet, but if they fail to win this game or get even a point from the match, they could find themselves in a tricky situation. They were beaten convincingly by Argentina last time, and there was nothing in that game to suggest they were unlucky, and a turnaround is coming. The home team must be at their best if they are to trouble their opponents. They must be strong in defence and take any half chances that drop their way.

Make sure to bet on Uruguay v Argentina with 22Bet!