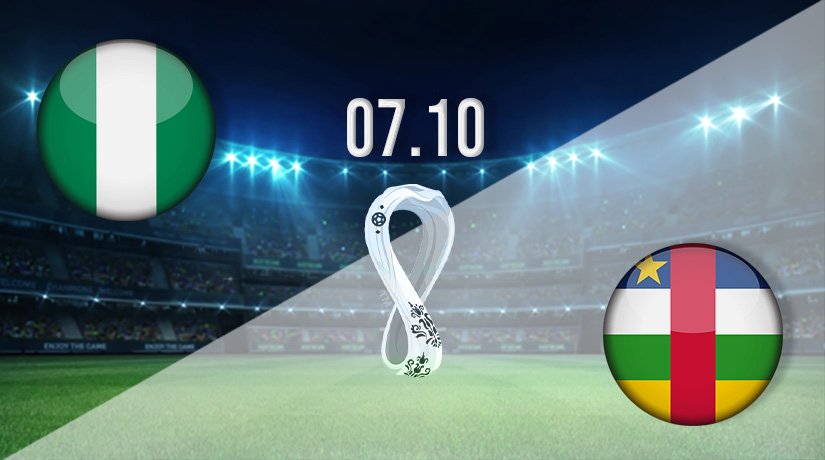 There’s a feast of international football planned in midweek, with Thursday bringing action from the semi-finals of the UEFA Nations League where big-guns Belgium and France clash. World Cup qualifiers from the various continents are also planned, including what has become a fiercely competitive African section.

Eight games will be played with some top teams on the programme, including DR Congo, Tanzania and Tunisia. The match that caught the attention of our football writers pairs Nigeria and the Central African Republic.

Nigeria enters this important World Cup qualifier with the advantage, and fans will be expecting to see the team make it count. They are packed with talent and look good enough, certainly on paper, to make it through and book their place at the head table, competing at Qatar 2022.

If you are a follower of football at any level, you’ll know only too well football matches aren’t won and lost on paper. It’s dangerous to write CAR off for this match, and that’s a mistake Nigeria won’t want to make as it could end up costing them the points.

The Central African Republic may have no prior history of wins over Nigeria, but that won’t put the players off. The visitors aren’t just here to make up the numbers, and although it’s possible, they will miss out on involvement at Qatar 2022; they are good enough to have a say in which sides from Africa do make it through.

The 90 minutes that awaits is sure to provide followers with entertainment and drama in equal measure.

Nigeria are on a winning run

Nigeria sits top of their group after two games with a maximum of six points on the board. It may be the early exchanges of the qualifiers, but they are already looking up to the task of progressing as pool winners and booking their spot at Qatar 2022, which begins next November and runs to mid-December.

The current leaders are already three points clear of nearest rivals Liberia in second place with four goals scored in those two matches and only one conceded. As far as starts go, this has been a strong one from Nigeria, and fans will expect them to build on it.

They got their campaign off and running with an impressive 2-0 win over Liberia early last month. It was a match they were expected to win, with most pundits picking Nigeria to get off to the perfect start, and they had no issues living up to the hype. Nigeria exploded out of the traps and moved into pole position in the group.

They set themselves up as the team to beat, and followers are now hoping Nigeria will hold their position between now and the final match. To do so, they must hold off the attention of Liberia and Cape Verde – two nations they have already beaten – then complete the first phase of their mission by getting the better of the Central African Republic who are bottom of the pile.

After beating Liberia in their opening match, Nigeria built on that success on matchday two to get the better of Cape Verde Islands but the victors were made to work for the points in that match.

They got the job done thanks to a 2-1 final score but Republic was much closer than many pundits expected it to be, and the beaten team cracked the Nigerian defence, something that will give the other teams in the group confidence.

CAR is already up against it

The Central African Republic was always expected to struggle at this level, and many followers of African football immediately picked out CAR as the weak link of the pool. They know they are up against some tough teams and that they are the underdogs, but CAR is determined to be more competitive than the experts give them credit for.

If they were to get something out of this match, even a point, it would send out a strong message to the rest of the group – CAR is not to be taken lightly. They must be respected as an opponent.

The Central African Republic can be found bottom of the four-team group, but they do have a point on the board from a possible six after snatching an unlikely but confidence-boosting draw with Cape Verde in their opening match.

They already find themselves five points off the pace set by leaders Nigeria but winning the group didn’t feature in their plans for this campaign. CAR would have hoped to be competitive and try to put pressure on the others for the runners up position.

CAR was last seen in action struggling on their second outing when suffering a first defeat of the group. They scored in their opening match when fighting out a 1-1 draw but were unable to find the target in game two when losing 1-0 against a decent Liberian team.

The margin of defeat was expected to be greater, so, perhaps, CAR would have come away from that loss with something to be proud of.

Many followers of African football will expect Nigeria to win this, add another three points and complete a clean sweep over their competition in the group before looking ahead to the next round of fixtures. Their fans will certainly want to see a third win from three and a few goals scored into the bargain.

If Nigeria plays to the best of their abilities, they should make light work of CAR and put on a bit of a show. If the pool leaders turn up thinking they deserve to win and CAR won’t pose too much of a threat, things could get ugly. The underdogs showed in their first game they can cope at this level and can find the net if they get the chance.

They will spend long periods of this match without the ball so much be ready to pounce when any goal scoring opportunities do come their way.

The pre-match betting odds on this match available to 22bet members has Nigeria priced at 1.11 for the win with CAR 19 and the draw 8.

Make sure to bet on Nigeria v CAR with 22Bet!