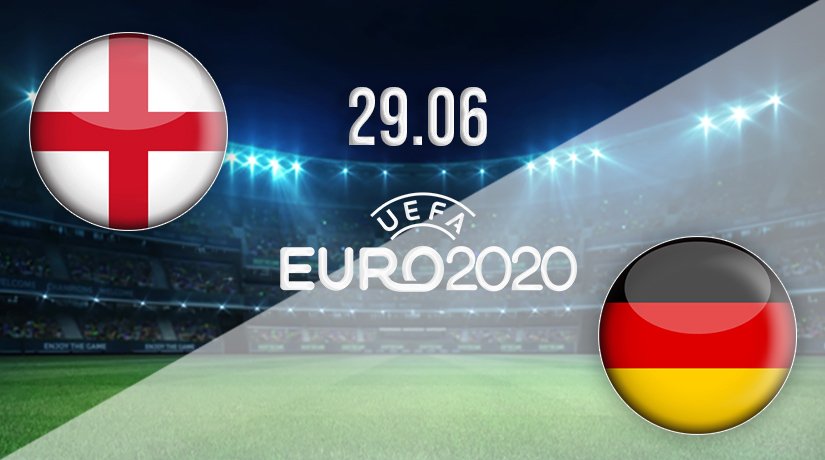 One of the biggest and most intriguing matches from the Euro 2020 Round of 16 will be played on Tuesday from 17:00 GMT. England takes on Germany for the right to progress to the quarter-finals. Extra-time and penalties are available if needed, meaning this grudge march will produce a winner and loser. Which team will grab this chance and keep alive their chance of winning the Euro 2020 title at Wembley in July?

England progressed as winners of their group and play a side that finished second in their pool behind France. That now counts for little, as both teams know past performances mean nothing in this match. They are involved in knockout football, where 90 minutes could be the difference between going through and going home.

Tuesday’s match will be the 17th time on record these rivals have clashed. The head-to-head stats currently favour the Germans, who have seven wins against the six of England with three games ending in a draw. The most recent clash produced a goalless finish in 2017, but that was a friendly game. There’s much more at stake here.

Three Lions made to work

England came through their pool as Group D winners with seven points on the board. They achieved that with an unbeaten record of two wins and one draw. The spare came in the form of a goalless draw at Wembley Stadium against the Auld Enemy. It was a match the home team were expected to win at a canter and were hot favorites to do so, but they got away with one at the final whistle. Scotland were the better team on the night, and England grabbed a share of the spoils.

That draw came on the back of a hard-fought 1-0 win over Croatia on matchday one in London. It was a game the Three Lions were picked to take three points from, and they did just that, but Gareth Southgate’s side were made to work for the points. Raheem Sterling scored the only goal of the game in the second half. England were more comfortable than the final score would suggest, but the Croatians proved they were no pushovers.

England were last seen in action scoring another 1-0 win when beating the Czech Republic at Wembley on matchday three. It was a case of more of the same as Sterling snatched a winner. His goal came early in the match, and despite chances for both teams, the single goal was enough to see them cross the line and progress as winners of the group, all without ever getting out of first gear.

Germany were unable to match the efforts of their opponents and failed to win their group. They were dropped into a much more competitive pool, however, added to Group F, which is known as the group of death. Germany finished behind winners France and ahead of Portugal and Hungary. They returned stats of one win, one draw and a defeat, the four points collected leaving them one behind Les Bleus, ahead of Portugal on goal difference and two points above bottom club Hungary.

The Germans opened with a narrow 1-0 defeat to France on matchday one, beaten by an own goal from Hummels, who knocked the ball into his own net with just 20 minutes on the clock. Germany had chances to get back into it but failed to take their chances and only had themselves to blame at the first whistle when leaving empty-handed, with no points to show for their efforts.

They did improve on that effort to beat Portugal 4-2 on matchday two. The goals were scored by Havertz, Gosens as well as own goals from Ruben Dias and Guerreiro. Germany received a helping hand that night, benefiting from two OGs less than five minutes apart, but there was no doubting the fact they were the better team. They wrapped it up with a 2-2 draw against Hungary on matchday three.

There is a huge amount of pressure on both teams, and that will ensure there’s tension in the air. Both teams have the quality to create chances but know defence is more important than attack. They won’t want to make any unforced errors and hand a gift to their opponents.

In that respect, England are the better team. They have kept a clean sheet in each of their three group games so far and scored a 1-0 win in two of them. Fans of the Three Lions would snatch at another 1-0 victory here, knowing the result is now far more important than the performance. They must get into the next round at all costs.

England have kept three clean sheets and scored two goals while Germany have conceded five goals in their previous three matches, scoring six along the way. The team that wins this is the one that can stand strong at the back, shut up shop and hit their opponents on the counter. Chances will be few and far between, meaning the pressure is on attackers to grab any chances that fall their way.

The pre-match betting odds available at 22Bet on this contest has England available at 2.5 with Germany trading at 2.915. Can’t split them? The draw has been deemed as a 3.22 option.

There’s plenty to bet on in the match at 22Bet with over 100 markets available. In addition to the match-winner, there’s both teams to score, total goals, handicap, first goalscorer and correct score. The best of the pre-game betting will be available throughout the match, thanks to live betting. This means a bet on the game is as possible and just as exciting in the final few minutes as it was before kick-off.

Stick with 22Bet for betting and match previews on all the top games from Euro 2020. Our team of football content creators analyse the matches that matter, offering our take on both nations’ stats and recent form.

Want to wager on other betting markets, such as BTTS, Handicap or Total Score? Make sure to bet on England v Germany with 22Bet!