Trent John Alexander-Arnold (born 7 October 1998) is an English professional footballer who plays as a right-back for Premier League club Liverpool and the England national team. Born and raised in Liverpool, Alexander-Arnold joined Liverpool’s academy in 2004. 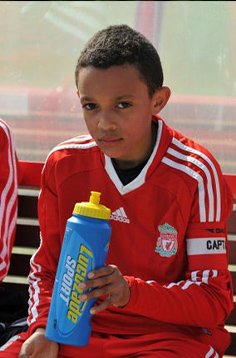 and later captained the club at various youth levels. He made his senior debut in 2016, aged 18, and has since made over 80 club appearances. He won Liverpool’s Young Player of the Season award in both 2017 and 2018, and in the latter year also became the youngest player from the club to start in a UEFA Champions League final. The following year, at the age of 20, he was nominated for the PFA Young Player of the Year award and named in the PFA Team of the Year. Alexander-Arnold is also a full England international, having made his senior debut in 2018, and featured at the 2018 FIFA World Cup where he became only the fourth teenager to start a match for England in the tournament.

Alexander-Arnold is the nephew of former Reading and Millwall footballer, and former Manchester United club secretary, John Alexander. His maternal grandmother, Doreen Carling, was once also in a relationship with former United manager, Sir Alex Ferguson, before moving to New York City where she later married. Alexander-Arnold was thus eligible to play for the United States prior to making his England debut. He has two brothers; Tyler, who is four years his senior and acts as his agent, and Marcel, who is three years younger. Outside of football, Alexander-Arnold volunteers as an ambassador for Liverpool-based charity, An Hour for Others which seeks to provide underprivileged members of the community with anything from food hampers and toys to cooking and science lessons. He has supported the charity since being introduced to it by his mother in his mid-teens. During his time with Liverpool’s academy, he and teammate Kris Owens pledged to support the initiative if either of them made it as professional footballers. His philanthropy also expands beyond the charity and in March 2019, after signing a new boot sponsorship with Under Armour (the second most lucrative boot deal in England behind Harry Kane’s) he initiated plans to purchase plots in Liverpool and use the funds to construct new pitches for the community. He is also an avid chess player, having been introduced to the sport by his father as a youngster, and in 2018 he played an invitational match against world champion Magnus Carlsen. The match, which was played as part of a campaign to promote the sport, ended in defeat for Alexander-Arnold after seventeen moves; eight more than technology entrepreneur Bill Gates managed when he faced Carlsen a few months earlier.

Alexander-Arnold was born in West Derby, Liverpool, where he attended St Matthews Catholic Primary School. When he was six years old, local football club Liverpool hosted a community summer camp to which his school was invited. 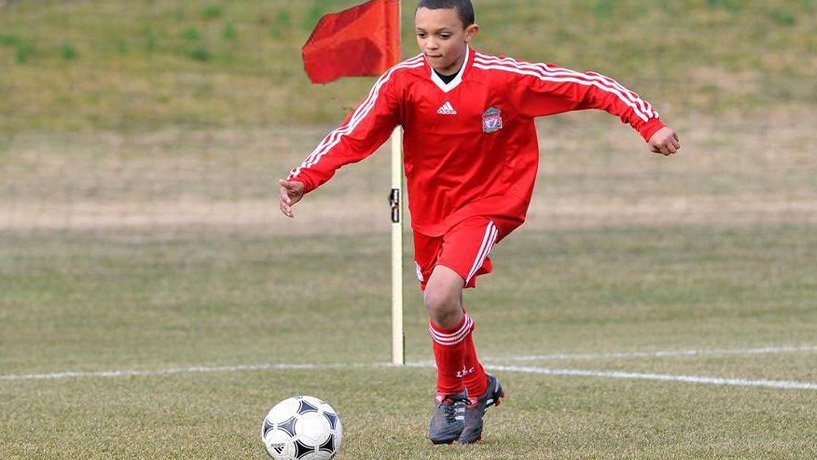 Alexander-Arnold’s name was drawn from a hat to attend the camp where he was spotted by academy coach Ian Barrigan who subsequently offered him the chance to join the club’s academy. He began training two-to-three times a week and later went on to captain the club at U16 and U18 level under coach Pepijn Lijnders. He excelled during his time with the academy and in 2015 was singled out by former Liverpool captain Steven Gerrard, who tipped him to have a bright future at the club in his autobiography. In the run up to the 2015–16 season, Alexander-Arnold was selected in the first-team squad by manager Brendan Rodgers for the team’s final pre-season friendly against Swindon Town where he marked his unofficial debut for the club in a 2–1 win.

Having previously taken part in Liverpool’s pre-season tour of the United States, Alexander-Arnold made his competitive first-team debut on 25 October 2016, starting in a 2–1 victory over Tottenham Hotspur in the fourth round of the EFL Cup. He was booked in the first half for a foul on Ben Davies before being substituted for first-choice right-back Nathaniel Clyne in the 68th minute. Former club-captain Gerrard later backed Alexander-Arnold “to become a top professional” after his debut with his performance also earning him a spot in the EFL Cup Team of the Round alongside teammate Daniel Sturridge. On 8 November, Liverpool announced that Alexander-Arnold had signed a new long-term contract with the club. He started in Liverpool’s next EFL Cup match later that month and registered his first assist for the club, setting up striker Divock Origi for the opening goal of a 2–0 win over Leeds United. He was also named man of the match for his performance. Alexander-Arnold then made his Premier League debut on 14 December, coming on as a late substitute in a 3–0 win over Middlesbrough, and made his first league start in a 1–1 draw with Manchester United on 15 January 2017. In May, he was named Liverpool’s Young Player of the Season and was nominated for the Premier League 2 Player of the Season award. His debut season ended with him having made 12 appearances across all competitions for the club. In the buildup to the 2017–18 season, regular right-back Clyne suffered a serious back injury which afforded Alexander-Arnold the opportunity to rotate with Joe Gomez during the early stages of the campaign.

On 15 August 2017, he scored his first goal for the club, scoring from a free kick in a 2–1 first leg Champions League play-off round win over Bundesliga team Hoffenheim. In doing so, he became the third-youngest player to score on his European debut for Liverpool, after Michael Owen and David Fairclough. During the group stages of the competition, Alexander-Arnold scored again in a 7–0 Champions League win over Maribor on 17 October, a result which was the joint-largest ever away win in the competition, and largest away win by an English club. He then scored his first Premier League goal for Liverpool on Boxing Day, netting in a 5–0 win over Swansea City at Anfield. On 4 April 2018, Alexander-Arnold became the youngest English player to start in a Champions League quarter-final match and performed strongly in a 3–0 win over Manchester City. His performance saw him named man of the match and earned him praise from the media for his ability to nullify City winger Leroy Sané. He impressed again in the reverse fixture as Liverpool eliminated City 5–1 on aggregate to advance to the semi-finals of the competition for the first time in 10 years. On 10 May, his domestic and European form was rewarded when he won the Liverpool Young Player of the Season award for the second season running. Later that month, he became the youngest Liverpool player to start in a Champions League final when he was named in the starting line-up against two-time reigning champions, Real Madrid. Tasked with marking Cristiano Ronaldo, he performed admirably though Liverpool ultimately succumbed to a 3–1 defeat. In July, following the conclusion of the season, he was nominated for the Golden Boy award and was later voted runner-up to Ajax defender, Matthijs de Ligt.

During the early stages of the following season, he made his 50th appearance for Liverpool when he started in a 2–1 victory over Tottenham; the same opposition against whom he had made his debut almost two years prior. In October, he was one of 10 players nominated for the inaugural Kopa Trophy, an award presented by France Football to the best young player under the age of 21. He ultimately ended sixth in the voting polls, having received votes from Owen, Denis Law and Pavel Nedvěd. In the months thereafter, he was consistently listed in reports by the CIES as the world’s most valuable full-back from a transfer value perspective. On 27 February 2019, Alexander-Arnold became the youngest player, aged 20 years and 143 days, to record three assists in a single Premier League match when he set up Sadio Mané twice and Virgil van Dijk once in a 5–0 win over Watford.

On 5 April, he became the fifth-youngest player to reach 50 Premier League appearances for the club, behind Owen, Raheem Sterling, Robbie Fowler and Gerrard, when he started in a 3–1 win over Southampton. Two weeks later, he was nominated for the PFA Young Player of the Year award, although the award was won by Manchester City’s Raheem Sterling, and was later named in the PFA Team of the Year alongside Liverpool teammates Virgil van Dijk, Sadio Mané and Andrew Robertson. On 4 May, during a 3–2 win over Newcastle United, Alexander-Arnold equaled the Premier League record for the most assists by a defender in a season, with his two assists in the match raising his tally to 11. It also saw him and Robertson, who had 11 assists of his own, become the first set of defenders from the same team to record double-figures for assists in the same season. Three days later, with Liverpool trailing Barcelona 3–0 on aggregate after a first-leg defeat, he recorded two more assists, including an “instinctive corner” for Origi’s winning goal, to help the club to a 4–3 aggregate victory and progress to a second consecutive Champions League final. On the final day of the domestic season, Alexander-Arnold assisted Mané in a 2–0 win over Wolverhampton Wanderers which saw him break the Premier League record for the most assists by a defender in a domestic campaign, with 12.

Alexander-Arnold has represented England at various youth levels and featured at the 2015 FIFA U-17 World Cup in Chile. On 7 October 2016, he scored twice for the England U19 team in a 3–1 win over Croatia. He repeated the feat in November in a 3–2 loss to Wales, though his first goal was later credited as an own goal by Mark Harris, and on 24 March 2017 again scored twice in a 3–0 defeat of Spain which secured England’s qualification for the 2017 UEFA European Under-19 Championship. He did not feature at the tournament itself, though, as Liverpool reached an agreement with England to rest him ahead of the following season’s league campaign. England went on to defeat Portugal in the final to claim their first ever title in the competition. The following month, Alexander-Arnold was called up to the England U21 team for the first time for their UEFA European Under-21 Championship qualifiers against Netherlands and Latvia. He made his debut against the latter on 5 September, starting in a 3–0 win played in Bournemouth.

In March 2018, while part of the U21 team, Alexander-Arnold was invited to train with the senior national team for the first time ahead of their friendly matches against Italy and the Netherlands. He received his first call-up in May 2018 when he was named in Gareth Southgate’s squad for the 2018 FIFA World Cup. His debut followed on 7 June 2018 when he started in a 2–0 pre-tournament friendly win over Costa Rica at Elland Road. Prior to the match, he was handed his match jersey by Prince William, Duke of Cambridge. 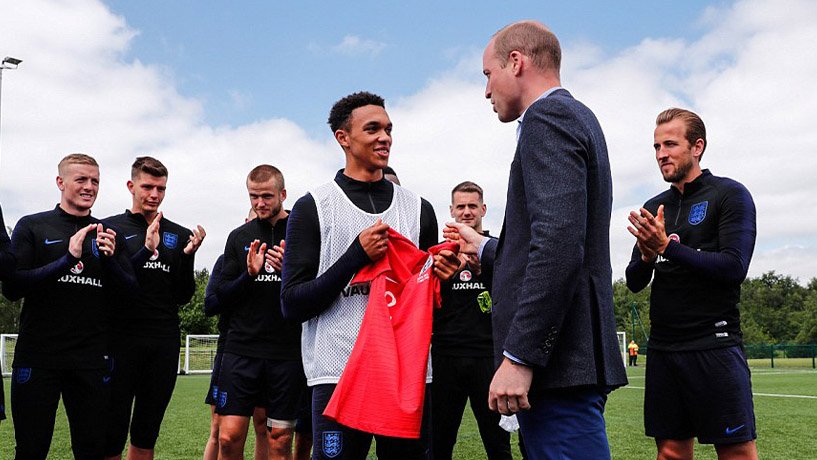 Alexander-Arnold then made his debut in the competition on 28 June, starting in a 1–0 group-stage defeat to Belgium, after both sides had already confirmed their progression to the knockout stages. In doing so, he became only the fourth teenager to start a match for England at a World Cup. It remained, however, his only appearance as Kieran Trippier was preferred at right-back and featured throughout as England were defeated by Croatia in the semi-finals, and then again by Belgium in the third-place play-off. On 15 November 2018, during a friendly international, held in honour of Wayne Rooney, Alexander-Arnold scored his first senior international goal as England recorded a 3–0 win over the United States at Wembley Stadium. In doing so, and at the age of 20 years and 39 days, he became the youngest Liverpool player since Michael Owen in 1999 to score for the national team.