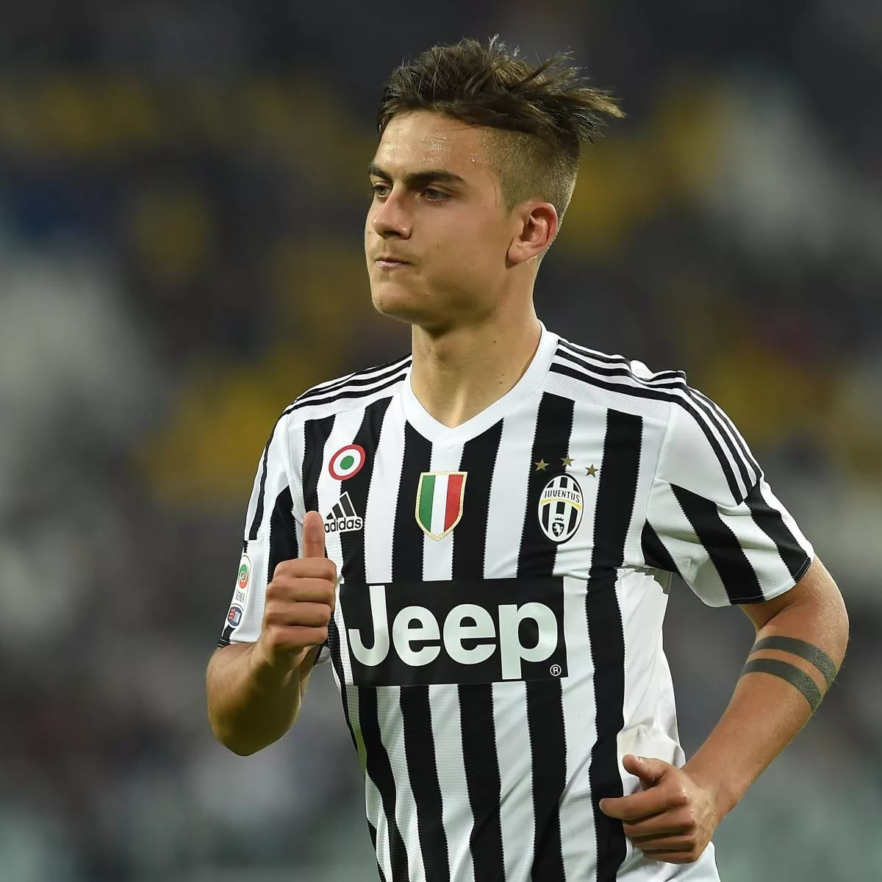 Paulo Bruno Exequiel Dybala (Spanish pronunciation: [ˈpaulo ðiˈβala];[A] born 15 November 1993) is an Argentine professional footballer who plays as a forward for Italian club Juventus and the Argentina national team. Considered Europe’s top five leagues’ sixth most valuable player, and the most expensive Juventus’ squad member from a transfer value perspective by the CIES,[B] he is commonly referred to as “La Joya” (“The Jewel”) due to his creative style of play, pace, talent, technique and eye for goal.

After beginning his career in Argentina with Instituto de Córdoba in 2011, he moved to Italian club Palermo in 2012. He played three seasons for Palermo, two in Serie A and won Serie B in 2013–14. In 2015, he joined Juventus for an initial fee of €32 million and has since made over 100 appearances for the club, winning the double of Serie A and Coppa Italia in each of his three seasons. He has thrice been named in the Serie A Team of the Year. Dybala made his senior international debut for Argentina in 2015 and was chosen for the 2018 FIFA World Cup.

A quick, creative, elegant, and agile player, with excellent technical ability, Dybala is known for his dribbling skills, balance, and close control in limited spaces, as well as his ability to beat opponents in one on one situations and protect or hold up the ball for teammates with his back to goal. Due to his speed on the ball, positioning, intelligent movement, and ball skills, he excels during counter-attacks and at beating the offside trap when making attacking runs. A hardworking player, he is also known for his stamina and defensive contribution off the ball. Dybala is capable both of creating chances for teammates, as well as scoring goals himself, due to his vision, passing, link-up play, and ability to drop deep and play off of other players, as well as his powerful and accurate ball-striking ability from both inside and outside the area. Despite his diminutive stature, Dybala is also effective at scoring with his head, due to his acceleration over short distances, and his ability to anticipate defenders inside the box.

A versatile forward, he is capable of playing in any offensive position: he has been deployed as a main striker, as a centre-forward, as a supporting forward, as an attacking midfielder, as a playmaker, as a false-9, or even as an inverted winger on the right flank, where he is able to cut into the centre and curl shots on goal with his stronger left foot. Because of his work-rate and involvement in the build-up of his team’s attacking plays, in addition to his goalscoring ability, Juventus manager Massimiliano Allegri has even deployed Dybala as an offensive-minded central midfielder on occasion (known as a “mezz’ala”, in Italian), and described him as a “box-to-box player” (“tuttocampista”, in Italian) in 2018. He has also operated in a deeper playmaking role on occasion. Dybala is also accurate from both free kicks and penalties. His playing style has drawn comparisons with compatriots Sergio Agüero, Javier Pastore, Carlos Tevez, Omar Sívori, Diego Maradona, and Lionel Messi, as well as former Italian forwards Vincenzo Montella, Alessandro Del Piero, and Roberto Baggio, the latter of whom described Dybala as the number 10 of the future in 2017. Widely considered to be a highly talented prospect in world football, in 2014, Don Balón named him one of the 100 most promising young players in the world born after 1993. Despite his talent, however, his mentality has come into question at times in the media.

After scoring a goal, Dybala is known for using his signature “mask” celebration; regarding the gesture, he commented: “My mask gesture isn’t so much a goal celebration but rather a message. It’s an ideal mask, which gladiators wore to fight. In Doha against Milan, after we lost Supercoppa, the idea of this celebration was born.”

Nicknamed “La Joya” or “El pibe de la pensión”, Dybala made his professional debut in the Primera B Nacional (Argentine second division) with his hometown club Instituto Atlético Central Córdoba at age 17. In total, he played 40 matches with the club, scoring 17 goals. He was the youngest to score a goal, beating the record of Mario Kempes. Dybala was also the first to play 38 consecutive matches in a professional league in the country (again edging Kempes), and was also the first to score two hat-tricks in a season. Dybala also scored in six consecutive games, surpassing the previous record of four matches.

On 29 April 2012, U.S. Città di Palermo president Maurizio Zamparini announced the signing of Dybala stating, “We have got Paulo Dybala – the new Sergio Agüero.” Later the same day, however, Instituto’s general secretary José Teaux stated that the man who had completed the negotiations with Palermo did not have the mandate to sell Dybala. Nonetheless, on 20 July 2012 Palermo released a press announcement confirming the signing of Dybala, who signed a four-year deal with the Sicilian club. According to the financial filing of the club, the transfer fee was €8.64 million.

Dybala made his debut for the club in a Serie A match against Lazio. He scored his first and second goal in Italy on 11 November 2012 when Palermo defeated Sampdoria at home, 2–0. Dybala had his breakthrough season in the 2014–15 Serie A where he scored ten goals in the first half of the season, forming a successful striking partnership with fellow Argentine–Italian Franco Vázquez and being linked with several top European clubs. He finished the season with 13 goals and 10 assists, which made him one of the top assist providers in the league.

On 4 June 2015, Juventus announced the signing of Dybala on a five-year deal for a fee of €32 million (plus €8 million in add-ons). He was assigned the number 21 shirt, previously worn by Andrea Pirlo, who left the club that summer. On 8 August, he came on as a 61st-minute substitute for Kingsley Coman against Lazio in the 2015 Supercoppa Italiana. He scored the second goal in the 73rd minute in a 2–0 win in Shanghai. On 30 August 2015, Dybala scored his first league goal for the club in the 87th minute in a 2–1 defeat to Roma. In his first 16 appearances of the season, Dybala managed six goals and two assists in all competitions, with a ratio of a goal every 151 minutes, which was superior to Carlos Tevez’s and Alessandro Del Piero’s goalscoring ratios in their debut seasons with Juventus. In the club’s history, only Roberto Baggio maintained a superior goalscoring record in the opening games of his debut season.

Dybala scored his first career Coppa Italia goal in a 4–0 win over cross-city rivals Torino on 16 December. On 23 February 2016, Dybala scored his first UEFA Champions League goal in a 2–2 home draw to Bayern Munich in Juventus’ first round of 16 leg. On 15 March, it was announced Dybala would miss the second round of 16 leg of the Champions League against Bayern on 16 March due to an edema overload of his left soleus muscle. He returned to action four days later in a 4–1 away win over Torino, but was substituted after sustaining yet another injury. On 21 April, Dybala scored two goals in a 3–0 home win over Lazio, which took his league tally to 16 goals in 31 appearances and also saw him score his 20th goal of the season in all competitions in the process. He finished the season as Juventus’ top scorer with 23 goals in all competitions and 19 goals in Serie A, as the club celebrated their Serie A title victory.

Following the departure of Paul Pogba to Manchester United in the summer of 2016, Dybala was offered the number 10 jersey by Juventus, although he turned it down, preferring to keep the number 21 jersey that he had worn during his previous season. Following manager Massimiliano Allegri’s switch to a 4–2–3–1 formation, the 2016–17 season saw Dybala operate in a deeper playmaking role behind the club’s new signing Gonzalo Higuaín, which saw a decrease in his goalscoring output as he took on increasing defensive and creative duties. After struggling to score at the beginning of the season, Dybala scored his first goal of the 2016–17 campaign on 27 September, in a 4–0 away win over Dinamo Zagreb in the Champions League. He scored his first Serie A goal of the season that weekend, on 2 October, in a 3–0 away win over Empoli.

On 11 April, Dybala scored two goals in Juventus’s first-leg Champions League quarter-final fixture against Barcelona, helping the club to a 3–0 home victory. On 13 April 2017, Dybala renewed his contract with Juventus until 2022. On 3 June, Dybala started in the 2017 Champions League Final, but Juventus were defeated 4–1 by defending champions Real Madrid, missing out on the treble.

On 4 August 2017, Dybala was named one of the three finalists for the Forward of the 2016–17 UEFA Champions League season award. On 9 August, Dybala was confirmed to wear the number 10 shirt for Juventus. On 13 August he scored two goals in a 3–2 defeat to Lazio in the 2017 Supercoppa Italiana. On 15 August, Dybala placed sixth in the 2017 UEFA Best Player of the Year Award. On 26 August, Dybala scored his first hat-trick in Serie A in a 4–2 away win over Genoa. He repeated the feat on 17 September, in his 100th appearance for Juventus, scoring all three goals, including one free-kick, in the club’s 3–1 away win over Sassuolo, marking his second hat-trick in Serie A. On 11 March 2018, Dybala scored a brace in a 2–0 home win over Udinese in Serie A; his first goal of the match was also his 100th career goal. He made his 150th appearance in Serie A in a 0–0 away draw against S.P.A.L., on 17 March.

On 1 September 2018, Dybala made his 100th Serie A appearance for Juventus, coming on as a late second half substitute in a 2–1 away win over Parma. On 2 October, Dybala scored a hat-trick in a 3–0 home win over Young Boys in the Champions League. In Juventus’s following Champions League group match on 23 October, Dybala scored the only goal of the game in a 1–0 away win over Manchester United.

Due to his family heritage, Dybala was eligible to play for Poland and Italy, but expressly stated that he feels Argentine and had always dreamed of playing for Argentina. Despite having sealed his decision of representing Argentina’s colours, Dybala maintains that he feels a strong connection to his grandfather’s country of origin, referring to it as “my family’s blood”.

Dybala was called by the Argentina under-17 team to participate in the XVI Pan American Games, but ultimately did not take part in the competition. On 19 July 2012, he received his first call-up for the under-20 team, but declined the invitation.

On 22 September 2015, Dybala was called for the first time for the Argentina senior team by manager Gerardo Martino, but his first appearance was on 13 October 2015, coming off the bench to replace Carlos Tevez in the 75th minute during a 2018 FIFA World Cup qualifying match against Paraguay. In May 2016, he was omitted from Argentina’s 23-man squad for the Copa América Centenario. Although Juventus insisted that they would not release Dybala for the 2016 Summer Olympics in Rio de Janeiro, he was included in Martino’s 35-man preliminary under-23 squad for the tournament on 24 May; he was not included in the final squad for the tournament, however.

In May 2018, Dybala was named in Argentina’s preliminary 35-man squad for the 2018 FIFA World Cup in Russia; later that month, he was included in Jorge Sampaoli’s final 23-man squad for the tournament. He made his World Cup debut in Argentina’s second group match on 21 June, coming on as a second-half substitute for Enzo Pérez in the 68th minute of an eventual 3–0 defeat to Croatia. This was his only appearance in the tournament, as Argentina were eliminated in the round of 16 on 30 June, following a 4–3 defeat to France.

He scored his first senior international goal on 20 November, in a 2–0 friendly home win over Mexico.