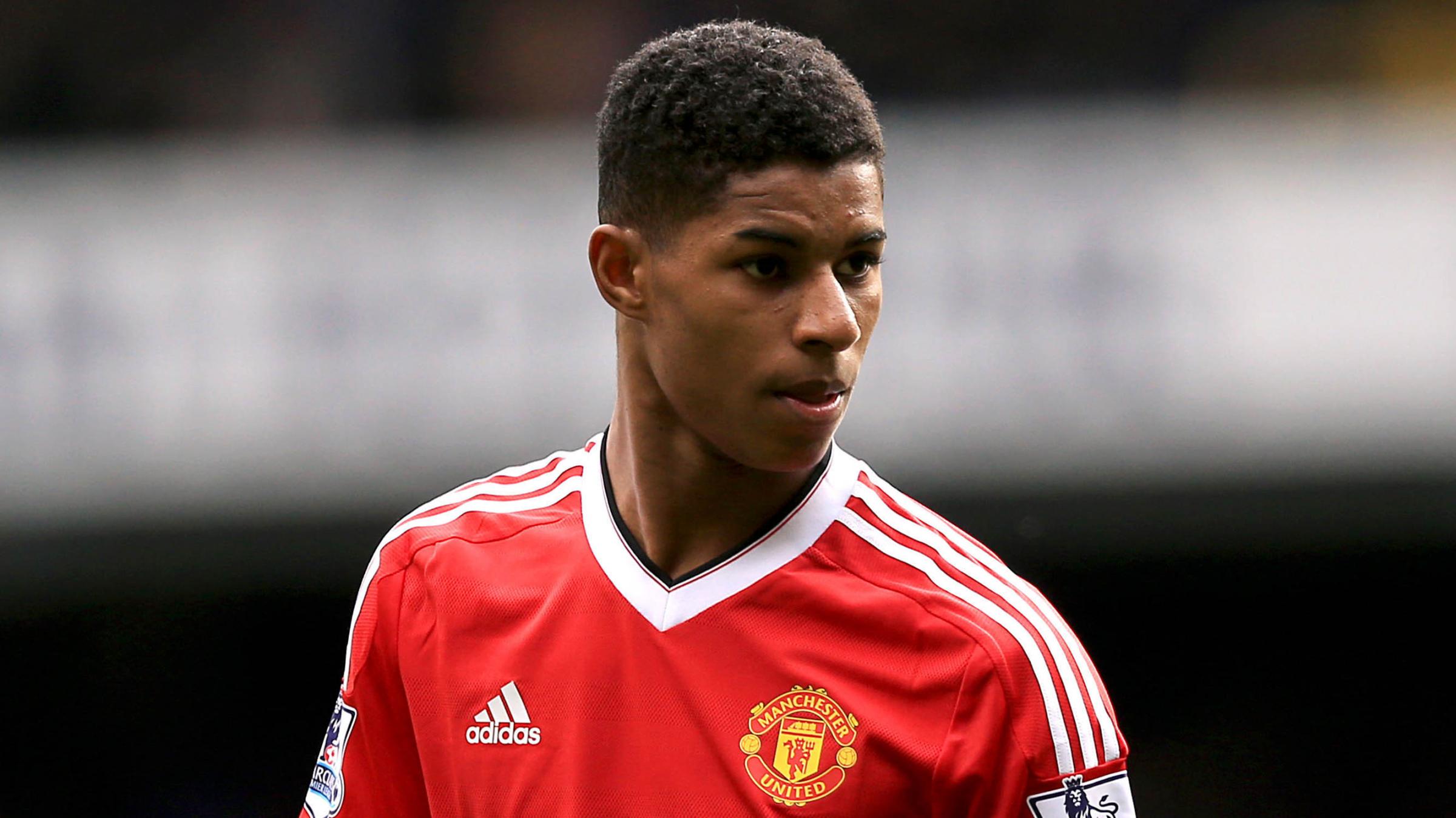 Marcus was born on October 31, 1997, in Wythenshawe, Manchester, England. He was raised by his mother, Mel Rashford. He grew up with three brothers and a sister. 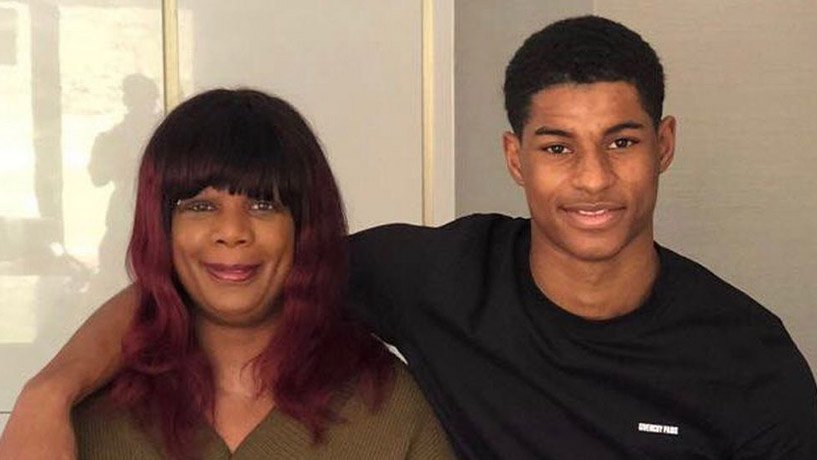 When he was 5, he joined the ‘Fletcher Moss Rangers,’ a junior football club, and became the center of attention because of his talent. Many of his current teammates, such as Cameron Borthwick–Jackson and Tyler Blackett, also played for the junior football club.
During his stint with the ‘Fletcher Moss Rangers,’ Marcus was noticed by a talent scout. At the age of 7, Marcus was enrolled at the academy of the prestigious club ‘Manchester United.’

Rashford was born in Wythenshawe, Manchester, and is of Kittitian descent. Rashford began playing football for Fletcher Moss Rangers at the age of five and joined the academy system at Manchester United at the age of seven. 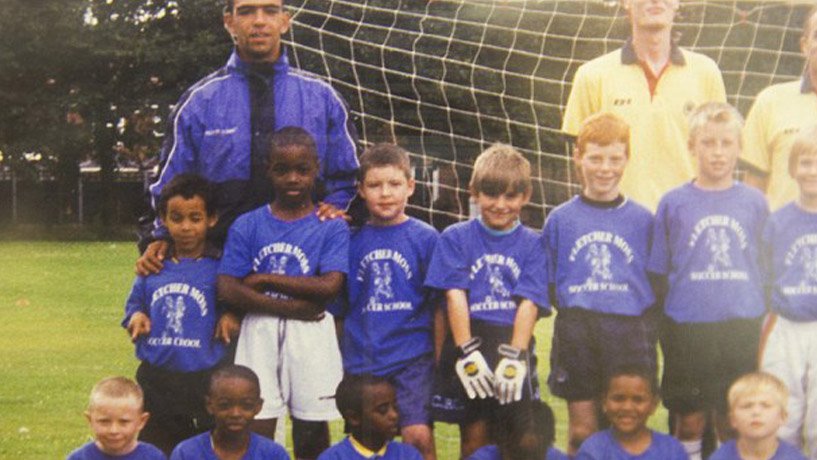 Marcus Rashford playing for Fletcher Moss Rangers as a child.

Growing up, his idol was Brazilian striker Ronaldo – the first game he saw was Ronaldo scoring a hat-trick for Real Madrid against Manchester United at Old Trafford in 2003, a game when Ronaldo was given a standing ovation by both sets of fans when he left the field. Rashford states, “I’ve grown up watching so much of him and his games. He always played free. No matter where he was playing, he played free and went out there and expressed himself. When you do that, that’s when you play your best football.”

Rashford was named on the first-team bench for the first time on 21 November 2015 by Louis van Gaal for a Premier League match against Watford, which Manchester United won 2–1. On 25 February 2016, Rashford was a late addition to the Manchester United starting line-up for their UEFA Europa League round of 32, second leg tie against Midtjylland after Anthony Martial was injured in the warm-up; Rashford marked his first-team debut with two goals in the second half of a 5–1 win. Rashford’s goals made him Manchester United’s youngest ever scorer in European competition, beating a record previously held by George Best. Rashford made his Premier League debut against Arsenal three days later; he again scored twice and provided the assist for the other goal in a 3–2 home victory, making him the third-youngest scorer for United in Premier League history after Federico Macheda and Danny Welbeck. On 20 March 2016, Rashford scored the only goal in the Manchester derby, his team’s first away league win over Manchester City since 2012. Aged just 18 years and 141 days, Rashford made his mark as the youngest ever scorer in a Manchester derby in the Premier League era.

During the FA Cup sixth-round replay against West Ham on 13 April 2016, Rashford scored a fantastic curled goal in a 2–1 win to put United through to the semi-finals. He later led the line in the FA Cup Final against Crystal Palace on 21 May, which ended in a 2–1 victory marking United’s 12th FA Cup win and Rashford’s first piece of silverware. He wrapped up the season with 8 goals in 18 appearances, despite only debuting in February, as well as winning the Jimmy Murphy Young Player of the Year. On 30 May, Rashford signed a new contract with United, keeping him at the club until 2020, with an option to extend for a further year.

For the new season, marking his place as part of the senior squad, Rashford was given the number 19 by new manager José Mourinho. Rashford scored his first goal of the season on 27 August 2016 against Hull City in tremendous fashion, scoring in the second minute of injury time after coming on for Juan Mata in the 71st minute. He scored thrice more the next month, on 18 September in a 3–1 league defeat to Watford; on 21 September in a 3–1 victory against Northampton Town in the EFL Cup third round; and in a 4–1 league win over Leicester City on 24 September. The following month he came runner-up to Portugal’s Renato Sanches in the Golden Boy award for best European player under the age of 21, on 24 October. As a player however he failed to score until 7 January 2017 when he scored a four-minute brace in the FA Cup against Jaap Stam’s Reading, which ended 4–0.

Rashford won his third trophy on 26 February in the EFL Cup Final, coming on as a 77th-minute substitute in the 3–2 victory over Southampton. He was an instrumental part of United’s 2–0 win over league leaders’ Chelsea on 16 April, scoring the first goal after 7 minutes from Ander Herrera’s through ball. Rashford scored another key goal four days later against Anderlecht in the 107th minute of the Europa League quarter-final second leg in a 2–1 win (3–2 on aggregate), sending United into the next round. He started in the Europa League Final on 24 May against Dutch team Ajax, which Manchester United won 2–0 thus earning his fourth, and first European, trophy. Due to the signing of Zlatan Ibrahimović, Rashford spent the majority of the season on the wing. He made the most appearances of any United player during the season, playing 53 times.

Rashford made his first appearance of his second full senior season on 8 August 2017 against Real Madrid in the UEFA Super Cup as a 46th-minute substitute in a 2–1 defeat. He started in a 4–0 home win against West Ham five days later on 13 August, providing the assist for Romelu Lukaku’s opening goal. Rashford scored his first goal of the season on 26 August, the opener in a 2–0 victory over Leicester, three minutes after coming on as a substitute. On 12 September, Rashford scored against Basel on his UEFA Champions League debut, the third in a 3–0 win, marking the sixth competition that he has scored in on his debut. He scored a brace against Burton Albion on 20 September in EFL Cup third round, as well as assisting the fourth goal in a 4–1 victory.

On 23 October, Rashford came third in the 2017 Golden Boy award behind winner Kylian Mbappé and Ousmane Dembélé. By 28 October, Rashford had contributed to 12 goals in 16 games, with seven goals and five assists, with his most recent goal being against Huddersfield Town on 21 October and his most recent assist coming against Swansea City on 24 October. On 10 March 2018, Rashford scored both goals in a 2–1 win over rivals Liverpool on his first Premier League start of the year. Rashford scored in United’s last game of the season on 13 May, a 1–0 victory over Watford at Old Trafford.

In August 2018, prior to the 2018–19 season, Rashford was given the squad number 10, after the release of the club’s previous number 10 – Ibrahimović. On 2 September, Rashford was sent off in a 2–0 win over Burnley at Turf Moor after clashing heads with Phil Bardsley. Rashford scored his first goal of the season on 29 September, United’s only goal in a 3–1 loss to West Ham United. On 3 November, he scored again, providing a winning goal in the second minute of stoppage time in a 2–1 win over Bournemouth. On 1 December, Rashford provided both assists in United’s 2–2 draw with Southampton, with the goals coming from Romelu Lukaku and Ander Herrera. The following Saturday against Fulham, he provided two assists for Ashley Young and Juan Mata before scoring the final goal in a 4–1 victory. On 12 December, Rashford came on as 57th minute substitute for Brazilian midfielder Fred and scored a header in the 87th minute in a 2–1 loss to Spanish team Valencia in the final group stage match of the UEFA Champions League.

On 22 December, Rashford scored in the 3rd minute of Manchester United’s first match under Ole Gunnar Solskjær, in which United beat Cardiff City 5–1. On 30 December, Rashford scored against Bournemouth again in his final game of 2018, also assisting Paul Pogba’s first goal in United’s 4–1 victory over the Cherries. During United’s first match of 2019 on 2 January, Rashford assisted the Red Devils‘ first goal from a free-kick and scored the second in a 2–0 win over Newcastle United at St. James’ Park. On 13 January, Rashford scored the only goal in a 1–0 victory over Tottenham Hotspur at Wembley Stadium. He scored his eighth Premier League goal of the season on 19 January in a 2–1 win against Brighton & Hove Albion.

On 2 February, Rashford was announced as Manchester United’s Player of the Month for January 2019, as well as winning United’s goal of the month for his strike against Tottenham. A day later, he made his 100th league appearance for the club and scored the only goal in a 1–0 away victory over Leicester City. In doing so, he became the second-youngest player, behind Ryan Giggs to reach the milestone for the club. His impressive performance in January earned him his first Premier League Player of the Month title, becoming the first United player since Ibrahimović in December 2016 to win the monthly league award. On 6 March, Rashford scored from his first competitive penalty to seal a 3–1 win in the second leg of their Champions League round of 16 tie against Paris Saint-Germain to send the club through to the quarter-finals on the away goals rule.

Rashford’s performances in his first senior season led to calls for him to represent England at UEFA Euro 2016. Manchester United academy coach Nicky Butt dismissed these calls, calling them premature and possibly harmful for the player’s development. However, on 16 May, Rashford was named in Roy Hodgson’s preliminary 26-man squad for the tournament. He became part of England’s Euro 2016 squad less than four months after making his Manchester United debut. On 27 May, he started in a warm-up match against Australia at the Stadium of Light, and scored the opening goal of a 2–1 win after three minutes, becoming the youngest Englishman to score on his international debut, and the third youngest overall. The previous youngest scoring debutant was Tommy Lawton in 1938.

On 16 June, he replaced Adam Lallana in the 73rd minute of England’s 2–1 win over Wales at UEFA Euro 2016, making his tournament debut at the age of 18 years and 229 days, becoming the youngest ever player to represent England at the European Championships, breaking Wayne Rooney’s UEFA Euro 2004 record by four days. Eleven days later, as England were eliminated 2–1 by Iceland in the last 16 in Nice, Rashford came on as a substitute for the final four minutes and dribbled past three opponents, making him the best in that statistic for the whole team in that match.

Rashford scored his first competitive goal for the senior team on 4 September 2017, with the winning goal in England’s 2–1 win over Slovakia in 2018 FIFA World Cup qualification. He was named in the 23-man England national team squad for the 2018 FIFA World Cup. The tournament saw Rashford make one start in a group stage match against Belgium, plus an additional five appearance as a substitute (in every match except Panama). He scored in the Round of 16 penalty shoot-out against Colombia which saw England progress to the quarter-finals, with England finishing fourth overall – their best performance since 1990.

On 8 September 2018, Rashford scored at Wembley Stadium in England’s UEFA Nations League opener against Spain, losing 2–1. Three days later, Rashford also scored in a 1–0 friendly win over Switzerland at the King Power Stadium. In the October international break Rashford was named for the Nation’s League squad to play Croatia, the match resulting in a goalless draw. Later that week, he scored a goal and an assist in the 3–2 away win against Spain. England’s final Nation’s League game on 18 November saw Rashford play in a 2–1 win over Croatia. This win saw England top their group and qualify for the Nations League finals in June 2019.