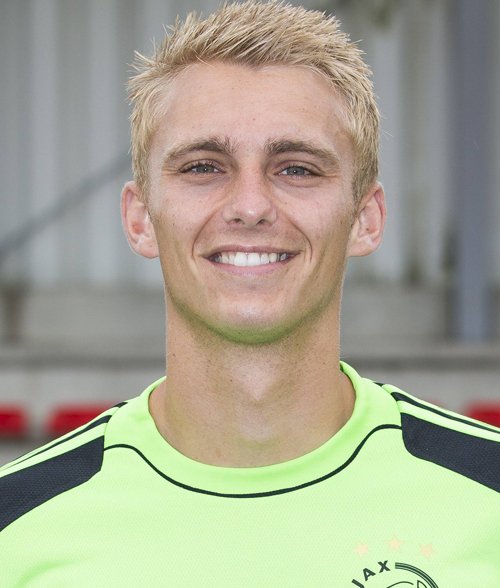 Jasper Cillessen is a Dutch footballer goalkeeper. Cillessen was born on 22 April 1989 in a small town of Groesbeek, where he started playing football in a local team De Treffers. In 2001 Cillessen moved to NEC, where he sealed his first professional deal. The goalkeeper played in the reserve team until the season 2008/2009 when he for the first time got into the line-up of the team in the match against SC Heerenveen and was even named “The man of the match”. Subsequently Cillessen secured his place in the squad, becoming a first choice goalkeeper.

After the season 2010/2011 he received the title “Gelderland football player of the season”.

On 27 August 2011 Jasper Cillessen signed a 5-year deal with Ajax. He appeared in the starting line-up for the first time on 21 September 2011 in the  Cup game against  Noordwijk.

Cillessen played for Netherlands U-21 team and was included in the player’s list of the national team in the games against Brazil and Uruguay.

Cillessen was born in Nijmegen and grew up in nearby Groesbeek. He began playing for the youth team of local club De Treffersbefore being scouted to the NEC/FC Oss youth academy in 2001. In 2008, he signed his first professional contract with NEC and started playing for the reserves. In 2010, Cillessen agreed a new two-year contract at NEC until June 2012.

Following an injury to first-choice goalkeeper Gábor Babos, Cillessen made his senior debut on 28 August 2010 in a 2–2 home draw against SC Heerenveen and was voted the man of the match. Even when Babos returned from injury, Cillessen managed to keep his spot in the first team and signed a two-year contract extension that tied him to NEC until 2014. At the end of the 2010–11 season, Cillessen was awarded Gelderland footballer of the year.

On 27 August 2011, it was announced NEC and Ajax had reached an agreement for the transfer of Cillessen to the Amsterdam club for an estimated €3 million. He signed a five-year contract, binding him to Ajax until 2016.

Cillessen made his first appearance for Ajax on 21 September 2011, in a 2nd round KNVB Cup away match against VV Noordwijk. He played the full match, conceding only to Sijbren Bartlema in the 66th minute of the 3–1 away victory. He made his first league appearance for Ajax in a 2011–12 Eredivisie match on 23 October 2011 against arch-rivals Feyenoord, coming on as a 66th-minute substitute for right back Gregory van der Wiel, after starting goalkeeper Kenneth Vermeer had been shown a red card. With Ajax down to ten men, Cillessen helped Ajax retain a 1–1 draw after Jan Vertonghen tied the match just minutes after the ejection of Vermeer.

Cillessen’s breakthrough into the first team began during the 2013 pre-season. Manager Frank de Boer said both of his two leading goalkeepers would get a chance to show why they should be his first choice. Early in that season, Cillessen made his first sustained run of appearances for Ajax in the Eredivisie.

On 25 August 2016, Cillessen signed a five-year contract with Barcelona for an initial €13 million transfer fee plus another €2 million in add-ons, replacing the outgoing Claudio Bravo. After only three training sessions, he made his debut in a home  match against Alavés, conceding twice from five attempts in a 1–2 loss.

Since his move to Barcelona in 2016, Cillessen managed to play a major role in the Copa del Rey for both the 2016–17 and 2017–18 seasons, starting 17 of 18 matches in the competition. Barcelona won the trophy in both seasons, making the club four-time consecutive Copa del Rey winners since 2014–15.

On 30 January 2019, he saved the first penalty of his professional career after 20 attempts in a 6–1 home win over Sevilla in the Copa del Rey, which enabled Barcelona to advanced to the semi-finals of the competition 6–3 on aggregate.

In October 2010, Cillessen was called-up for the Netherlands national under-21 team by the national team coach, Cor Pot, for the 2011 UEFA European Under-21 Championship qualification play-offs against Ukraine.

After the 2010–11 season, Cillessen was placed in the pre-selection for the senior Netherlands squad’s friendly matches against Uruguayand Brazil. Manager Bert van Marwijk eventually selected Cillessen for the Netherlands’ friendly trip to South America. On 7 May 2012, Cillessen was named in the provisional list of 36 players for the UEFA Euro 2012 tournament, one of nine uncapped players to be chosen by Van Marwijk as part of the preliminary squad.

On 7 June 2013, Cillessen obtained his first cap for the Netherlands national team under manager Louis van Gaal, after several call-ups in the past. Cillessen played the first half in a friendly encounter against Indonesia in a 3–0 away win for the Dutch. He was relieved in goal by Kenneth Vermeer in the 46th minute, as the two helped keep a clean sheet during their friendly encounter in Asia.

In June 2014, Cillessen was selected in the Netherlands’ squad for the 2014 FIFA World Cup. He was given the number 1 jersey and started in the team’s opening match, a 5–1 victory against Spain in Salvador. He went on to start in every match in the tournament as the Oranjetook third place. However, in the quarter-final against Costa Rica, Louis van Gaal unexpectedly substituted him for Tim Krul ahead of the penalty shootout, which the Dutch won.