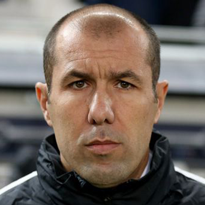 He started working at the professional level at the age of 35, initially with Camacha and Chaves, before winning promotion to the Primeira Liga with Beira-Mar in 2009–10. He later managed Braga, Olympiacos and Sporting CP.

In 2014 Jardim joined Monaco, and led the club to its second Ligue 1 championship in 2016–17. After being dismissed in October 2018, he was replaced by Thierry Henry and reappointed in January 2019.