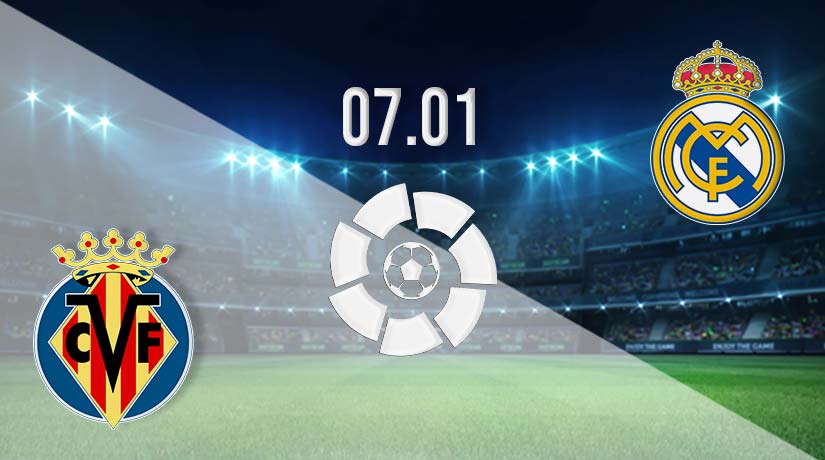 Three matches will be played in the Spanish La Liga on Saturday, starting with the champion’s trip to Villarreal for a 15:15 GMT start. Real Madrid head into round 16 of the La Liga campaign sitting in second place behind pace-setters Barcelona. There’s plenty of life left in this title race as we return to normal following the World Cup 2022 enforced break. But which team will come out on top? Good work done in winter will go some way to deciding if a team ends as champions of Spain’s top division or one of the also-rans.

Will Blancos regain their crown or is 2023 the year that Barca fire back, forgetting the off-field problems that have plagued them over the last few seasons. Real Madrid have suffered a mixed bag of results this winter, winning three of their last five games, a run that has allowed Barcelona to go top thanks to four wins and a draw in the same period. The visitors did bank six points from their last two outings, and everyone connected to the champions know a hattrick would push them back into pole position. But winning on the road at Villarreal is no mean feat. The home team are up to seventh after winning each of their last two and another victory could lift them into the top-four and the Champions League places.

How will this game play out? Our team of Spanish football experts preview Villarreal v Real Madrid, bringing readers up to speed on the stats, form, and our predictions. Looking through past meetings of these teams we note each of the last two have ended in goalless draws with six of nine ending level. We must go back to April 2016 for the last match where more than one goal separated Villarreal and Real Madrid. That was a 3-0 home win for Blancos with Karim Benzema, Lucas Vazquez and Luka Modric scoring the goals.

Villarreal entered the weekend sitting seventh in the La Liga ladder with their stats for the campaign showing seven wins, three draws and five defeats with seventeen goals scored and eleven conceded. With 24 points on the board, the home team are just three behind Atletico Madrid but are 14 off the pace set by Barcelona. That means a title tilt looks highly unlikely meaning everyone at the club has one mission; to reach the top four. A place in next season’s Champions League would be a huge achievement for Villarreal.

The home team know they are up against it when hosting the current La Liga champions although they do take encouragement from their recent form. Villarreal enter this match having taken nine points from the last fifteen available, winning each of their last two outings. Will they make it three wins on the bounce? Another victory would provide a huge boost to the team’s confidence and chances of making it to Europe’s elite in late summer. That’s all the encouragement the players will need when preparing for this game.

Villarreal bagged an important 1-0 away win over Espanyol before the international break and returned in similar fashion, beating Valencia 2-1 at home in their most recent outing. The goals needed to win that match came from Chukwueze and Foyth with the decider coming with 88 minutes on the clock in what was a grandstand finish. Villarreal fell behind early in that game but used the crowd and their fighting spirit to snatch victory from the jaws of defeat.

Real Madrid won the league at a canter last season with Barcelona failing to land a glove on them across the campaign. They were expected to add another La Liga crown to their cabinet this term and were the red-hot favourites to defend their title before a ball had been kicked, but the highest level of Spanish football rarely follows the script. Blancos now have a fight on their hands as Barcelona roar back to full strength, throwing their hat into the ring as contenders.

The visitors arrive for this match in second place with their stats for the season showing a dozen wins, two draws and a single defeat with thirty-five goals scored and fourteen conceded. They have amassed thirty-eight points at this stage and that’s the same number as Barca who lead the chance on goal difference, seven better than the chasing pack. It may come as a bit of a surprise to see Real Madrid in second place, but there’s nothing in it and the champions will fancy themselves as good enough to get back on top.

Real Madrid suffered a draw and a defeat recently, but returned with a pair of wins, taking six points from their last two games. They were seen beating Real Valladolid 2-0 away from home in their final match of 2022 and that would have done wonders for morale in the camp. They now enter the year in high spirits and will want to pick up where they left off. A win would send them rushing back into pole position in the table.

Here we have a meeting of two teams who enter on the back of a pair of wins. Villarreal are chasing down a top-four finish in La Liga but know they must be consistent to stand any chance of making it to Europe’s elite next season.

Real Madrid knows they can’t afford to concede ground to Barcelona who are in great form at the minute. They haven’t been near their best this winter, but Madrid is a team that knows what it takes to win important games and titles.

The pre-match betting odds available at 22bet has Villarreal priced at 3.34 for victory with Real Madrid 2.025 and the draw 3.86. There are many other markets available on this match to 22bet registered users, including the first goalscorer, both teams to score, handicap and total goals.

Make sure to bet on Villarreal v Real Madrid with 22Bet!