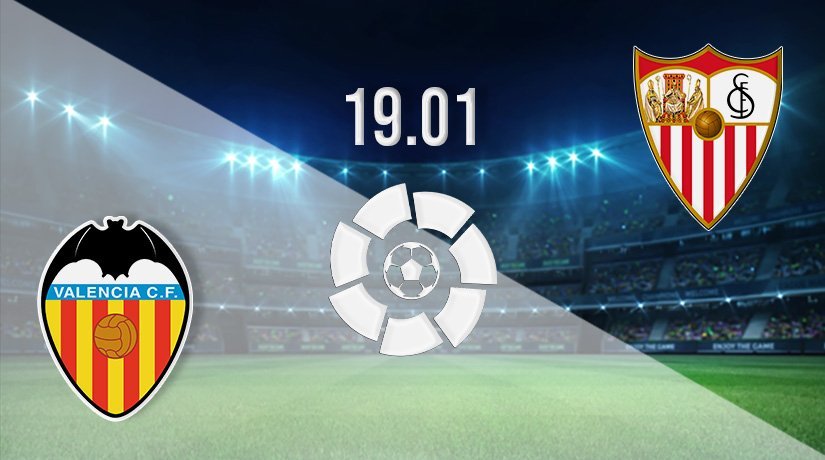 There is a great variety of football competitions played on Wednesday with matches taking place in the English Premier League and Championship, African Cup of Nations, Coppa Italia, Ligue 1 and more. The match our team of football writers will focus on in this preview comes from the Spanish La Liga where Valencia and Sevilla face off from 20:30 GMT. This contest will be played before a capacity crowd with millions more worldwide watching the play live on television. This will be round 21 for both teams and gives the visitors a golden opportunity to close the gap on current leaders Real Madrid.

Sevilla may be the team playing out of the away dressing room for this fixture but they have more to play for. They have already proven to be the dark horses of the competition and are currently second in the table behind leaders and title favourites Real Madrid. Victory here would move Sevilla to within two points of Blancos which will be more than enough to ensure the visitors are ready for business. Valencia are stuck in midtable and eager to use the home advantage to break a two-game losing streak.

The stats attached to this fixture tells us to expect an entertaining match with plenty of goals scored. Wednesday will be the second time these sides have met this season with the pair playing out a 3-1 home win for Sevilla back in September. Neutrals would love to see anywhere near a repeat performance of that game but we’re sure both managers would be happy enough with a narrow, uneventful win and the three points that go with it.

The hosts suffer back to back losses

Valencia started the week down in 10th place in La Liga and they have arrived at a crossroads. The results of upcoming games could decide whether this team is pushing for a place in the European competitions, such as the Europa League or the Europa Conference League or they are stuck at the wrong end of the table, battling to avoid relegation. If they have ambitions of climbing the ladder they must start to put a run of good results together, especially in their matches played at home. Consistency is the key for this Valencia side and the fans want to see much better from them going forward.

The locals line-up for this game with their record for the season reading seven wins and seven draws against six defeats. They have scored 32 goals in their opening 20 games but have also conceded 32 goals and that leaky defence paints a picture of why this team is struggling. Looking closely at their form we note Valencia have conceded more goals than Alaves who are down in the relegation zone, sitting third from bottom of the pile. It’s worth noting that Valencia have scored more goals than Sevilla who are second from the top.

They prepare for this latest outing on the back of a poor run of form that has seen them lose each of their last two games, failing to take any of the six points available to them. That double blow consists of a painful 4-1 defeat away to Real Madrid after losing 2-1 at home to Espanyol in a match they were expected to get at least a point from. Valencia did have more joy in the cup and beat Atletico Baleares in the Copa del Rey on Sunday afternoon. A more comfortable margin of victory was expected but the players involved would have been relieved to get the result and get back to winning ways.

Sevilla fans would have hoped to see their side pushing hard for a top four finish this season and a space in next term’s Champions League. Thet club are on track to achieve that goal but the supporters can now let themselves dream a little higher as their side are involved in the title race and rank as the main danger to Real Madrid. Blancos lead the way and are looking like a side that will take all the shifting but have failed to win half of their last four league matches. That has left the backdoor ajar for Sevilla to lay down a challenge, closing the gap thanks to a run of wins.

The visitors arrive for this contest sitting in second place with 44 points on the board, five fewer than Real Madrid. A win on the road over Valencia would see them slash that lead to just two points, injecting life back into this title race. There’s little doubt that Real Madrid should have been further clear at this stage but their lack of consistency has cost them points and Sevilla are showing no signs of throwing in the towel just yet. They appear to be up for the challenge of pushing for a league win and Atletico Madrid’s shock triumph last season will give the fans belief that something similar can happen again this year.

Sevilla have taken 13 points from the last 15 that have been available to them with that purple patch consisting of four wins and a draw. They have won each of their last two league games and boosted confidence further still with a hard-fought 1-0 over Getafe when last in league action. The winning goal was scored by Mir with 22 minutes on the clock and, despite a few nervy moments, that was enough to see them across the line with all three points.

Following defeat in each of their last two league games, Valencia are in trouble of losing their way this season. They are under pressure to respond to those losses and the fans who pack themselves into the stadium on game night will demand better. They want to see a much improved performance from certain players.

Sevilla have the quality, class and form to win this match and if they play to the best of their abilities they have a great chance of landing all three points. The visitors must be willing to work hard for the win but this game looks there for the taking.

The pre-match betting odds available at 22bet has Valencia priced at 3.2 for the win with Sevilla trading at 2.38 and the draw 3.115.

Make sure to bet on Valencia v Sevilla with 22Bet!