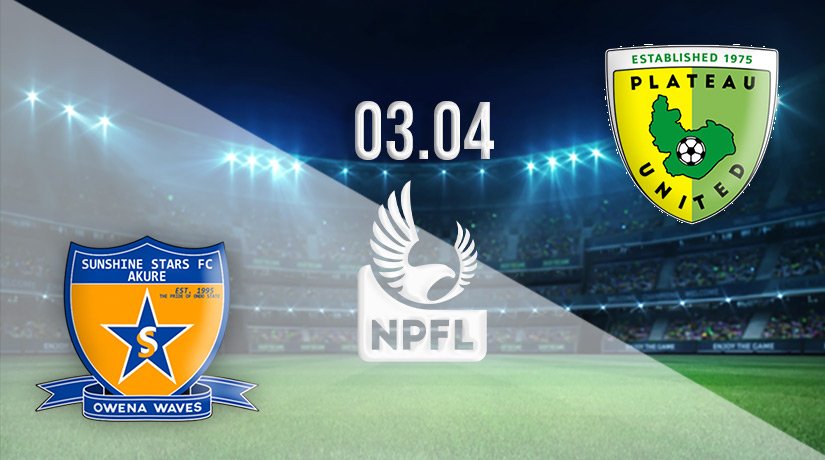 Sunshine Stars will be looking to climb the table from 8th place and challenge for the CAF tournament positions.

A win against favourites Plateau United will also be crucial in bolstering their confidence in the run-in.

Sunshine Stars will be hoping to cause a massive upset against Plateau United on Sunday, given the pedigree and form of the visitors to the Akure Township Stadium.

Can Plateau United Maintain Pressure on League Leaders Rivers United with a Win in Ondo?

Plateau United are just a point behind league leaders Rivers United. They will hope to maintain pressure on the leaders with a win over Sunshine Stars.

They will also be hoping to capitalise on any slipups by the league leaders to take the top spot with just nine matches remaining this season.

Sunshine Stars have collected six points from the available 15 in their last five NPFL outings. They have won two matches and lost three in this run.

Title-chasing Plateau United are unbeaten in the last five matches. They have collected 13 points and dropped just two in this run.

United will be hoping to extend their unbeaten run and maintain pressure on the league leaders Rivers United.

The 30-year-old striker offers Sunshine Stars massive experience upfront. Emmanuel also provides versatility because he can play the number 10 playmaker role, down the left-hand side, and through the middle as a conventional centre-forward.

His aerial strength is crucial for Sunshine Stars because it helps them pose a threat during set pieces or when hitting crosses into the box.

Emmanuel also offers them a pivot in the striking role around which their wingers and attacking midfielders can play.

The veteran striker becomes the reference point of Suns Stars’ attack, which is crucial in breaking down dogged defenses or escaping pressure with a high ball bypassing the midfield.

Emmanuel will be crucial for Sunshine Stars on Sunday as they face in-form Plateau United at the Akure Township Stadium.

For Plateau United, Sunday Anthony has been central to their season. The 22-year-old attacking midfielder has grabbed three goals and six assists in 17 appearances for Plateau United.

The former Kanemi Warriors ace has developed into one of the finest goal-scoring midfielders in the NPFL, and this has been central to Plateau United’s title challenge this season.

These numbers underscore his importance for Plateau United as they chase down league leaders Rivers United with the gap down to just one point between the two with nine matches remaining in the season.

Sunday Anthony will be crucial for Plateau United when they face Sunshine Stars looking to take three precious points.

Expect the in-form Plateau United to play on the front foot, dominating possession, and force Sunshine Stars back to their half for large swathes of the match.

Plateau will go for a win as they seek to overhaul Rivers United at the top of the table in the run-in. As a result, their approach will be attacking-minded and designed to break down the dogged defending of Sunshine Stars.

Sunshine Stars will approach this match with pragmatism and prioritise solidity. They will be braced for a fast start from Plateau United; they will aim to absorb the early pressure, frustrate the title-chasers, and use counterattacks and set pieces to pose a goal threat.

Plateau United are favoured to take all three points and bolster their title challenge.

Make sure to bet on Sunshine Stars vs Plateau United with 22Bet!