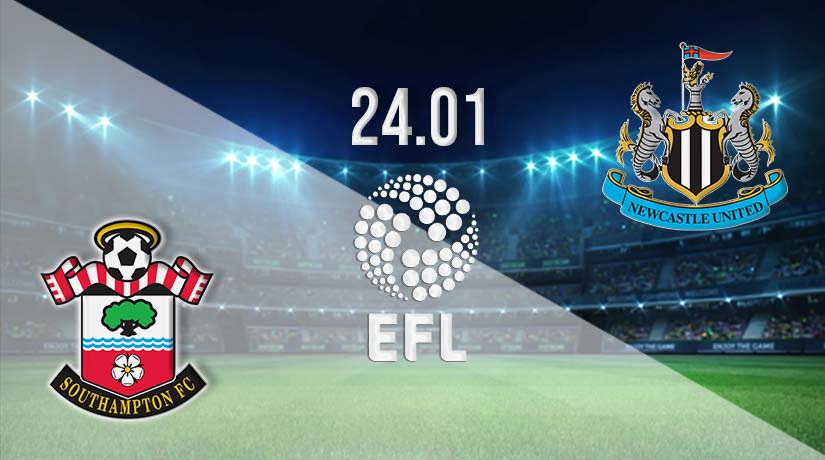 Southampton and Newcastle have a massive chance of winning the EFL trophy this season. The two teams go head-to-head in the first leg of the semifinal at St Mary’s Stadium on Tuesday at 20:00 GMT.

The high-flying Newcastle will look to get a strong result away to Southampton before welcoming the Saints to St. James’ Park for the second leg.

Southampton will look to take their mind away from their bottom-of-the-table Premier league standings by taking a strong position to qualify for the EFL Cup final.

For a team in the basement of the Premier League and facing the dire relegation reality, Southampton’s cup run has been an antidote to their lousy season.

Manager Nathan Jones will impress upon his players that chances to compete in a semi-final do not come by easily and that the players must enjoy it because they have earned it, especially after eliminating favorites Manchester City.

Keeping the cup run will also be important for the Saints because it positively influences their league form as they look for consistency and performances to pull themselves out of the relegation zone and into safety.

Eddie Howe will rightly see this as Newcastle’s best chance to win a trophy to cap their impressive season, seeing them riding high inside the top four after 19 rounds of fixtures.

The Magpies will look to start strongly away at St. Mary’s and seal the qualification for the final at Wembley when they host Southampton for the second leg.

The challenge for Howe will be balancing his squad for the cup and Premier League duties. He would not want his side to take the foot off the pedal in their pursuit of a top-four spot. However, making it to the final is important for the club and the long-term project.

Nathan Jones is still without long-term absentee Tino Livramento. The 20-year-old right-back has been out of action since April 25th, 2022.

The Saints will also be without Theo Walcott. The 33-year-old right winger is nursing a calf strain he picked up on December 30th last year.

Eddie Howe will be without midfielder Matty Longstaff. The 22-year-old is sidelined with a knee injury he picked up on December 26th, 2022. No return date has been set for the central midfielder.

The Magpies will also be without right-back Emil Krafth; the 28-year-old is nursing a cruciate ligament rupture. He is a long-term absentee for Newcastle, having missed 28 matches.

All the other heavy hitters for Newcastle will be available for selection. This comes as a boost for Eddie Howe as he juggles the Cup and the Premier League campaign.

Nathan Jones and his Southampton charges will look to achieve high-performance levels with tempo, rhythm, pressing, and energy against a good Newcastle side. They will seek to leverage the home advantage and get the St. Mary’s crowd involved.

Newcastle will look to be disciplined, structured, and brave in their approach. They take the sting out of the match through their patient passing before imposing their style and quality on the Saints. The focus will be to get the best result ahead of the second leg.

Newcastle will have too much for Southampton. They will win the match and take a giant step toward the EFL Cup final date at Wembley.

Make sure to bet on Southampton vs Newcastle with 22Bet!