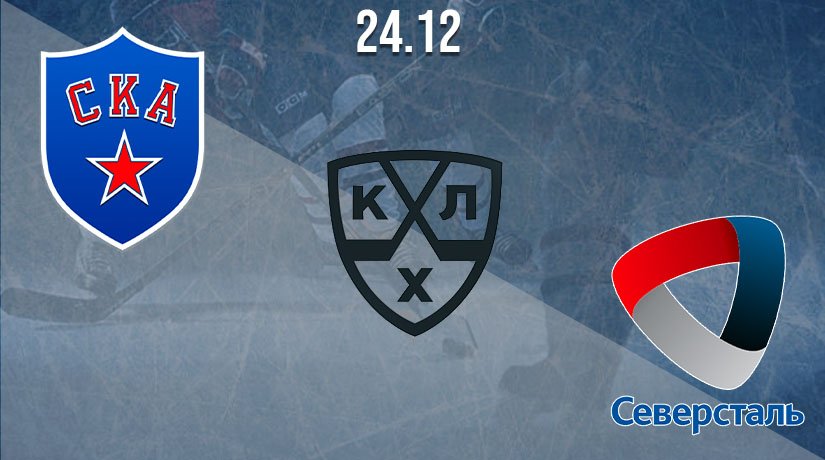 On December 24, SKA will host Severstal as a part of the KHL regular season. Will Severstal oppose something to the strong opponent? Look for the answers in the quality prediction.

In the last match, the St. Petersburg SKA defeated the leader of the Western Conference CSKA (4-3 SO) and reduced the gap from the Moscow club to 7 points. Head coach Valeri Bragin cannot yet count on injured forwards Malte Strömwall and Miro Aaltonen and a whole group of players who went to Canada as part of the youth team. In the confrontation with Severstal, Petersburgers won 33 times in 38 matches, losing only twice in regulation time.

Having lost to Lokomotiv (1-2), Severstal interrupted a series of 5 victories in a row. At the moment, the Cherepovets team is sixth in the Western Conference standings, but a place in the playoffs has not yet been secured: the gap from the three pursuers is only 2-3 points. Andrei Razin’s team is still among the worst in terms of the powerplay: only 15% of attempts were successful (21 out of 140). The last victory in regulation time over SKA Severstal won in January 2012, in 8 years they could beat the St. Petersburg club in overtime only twice.

SKA has been having a hard time meeting with the Cherepovets lately. For example, in the last face-to-face confrontation SKA won, but they did it, conceding a couple of goals within the decisive playing segment. It was just some miracle that saved the army team. A little earlier, in 2 personal meetings, Severstal even manages to cling points with the St. Petersburg team. In general, for already four face-to-face meetings in a row, Severstal imposed a fight to their opponent. The victory will help Severstal gain a foothold in the top 8. We think that after a brutal match with CSKA, SKA will not give the best performance. On the contrary, Severstal will be very angry because of the offensive fiasco at the last minute in Yaroslavl. We propose to bet on the victory of Severstal considering overtime and shootouts.