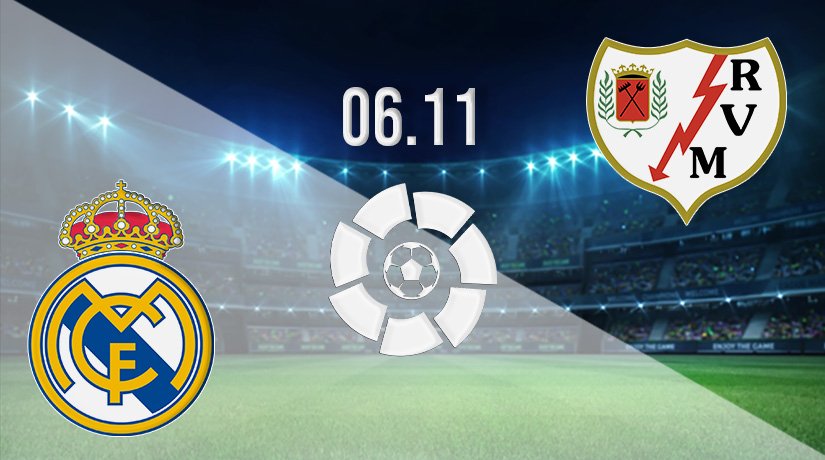 Second-placed Real Madrid takes on sixth-placed Rayo Vallecano at the Santiago Bernabeu Stadium in La Liga on Saturday at 21:00 GMT.

Los Blancos are second on the La Liga table with 24 points, one behind leaders Real Sociedad with 25 points, albeit having played a match less than the league leaders.

Rayo Vallecano have made a decent start to the season but face one of the title favorites in Spain, which means that a tough afternoon is in store for Los Franjirrojos.

History is Against Rayo Vallecano

The last time these teams met, in April 2019, Rayo Vallecano earned a memorable 1-0 win with Adri Embarba’s penalty the difference.

There is a massive gulf between Rayo Vallecano and Real Madrid in terms of stature and pedigree, but only miles separate the two clubs in terms of distance.

In their return to the top flight, Rayo Vallecano have made massive strides with a solid start to the season as they bid to remain in La Liga.

History is against Rayo in this fixture as they have not won at the Bernabeu since 1996, with Los Blancos notching victories in 10 out of 11 meetings between the two in this fabled ground.

Real Madrid’s Midweek Exertions Will Have an Impact

Having played in the Champions League against Shakhtar Donetsk on Wednesday, Carlo Ancelotti’s men will have a quick turnover to prepare for the Saturday night match.

Los Blancos cannot afford to drop points against Rayo Vallecano at home with the La Liga battle heating up. The expectation from the faithful inside the Bernabeu and the hierarchy at Real Madrid will be three points to keep pace with the La Liga table’s summit.

With just four points separating the two teams, Andoni Iraola’s men will not be lacking in confidence and belief as they step onto the Santiago Bernabeu turf.

Los Blancos’ form in La Liga has been patchy. Carlo Ancelotti’s men have won three, drawn two, and lost one in the last six outings. At the top of the La Liga form table is Sevilla with four wins, a draw, and a loss in the last six rounds of fixtures.

Leaders Real Sociedad have won three and drawn three. This shows that Los Blancos need to up their consistency in results to stand a chance to scale the top of the table and fight off current champions Atletico Madrid.

Los Franjirrojos have been impressive in their start to life in the topflight for a newly-promoted side. In their last six matches, Andoni Iraola’s men have scored three victories, one draw, and two defeats.

This run of form has been enough to propel them to sixth place, away from the relegation positions, and pushing for the top half of La Liga.

Rayo Vallecano’s away form has not been particularly impressive, with two losses, one draw, and one win in their last four outings away from home.

Carlo Ancelotti will have to choose the starting eleven from a squad without Federico Valverde, who has had a sprain from October 25th, Mariano Diaz, who underwent nose surgery on October 31st, and Rodrygo, who has been out with a hamstring since October 31st. These players are unlikely to be fit to face Rayo Vallecano on Saturday.

Dani Ceballos will also be missing from the clash against Andoni Iraola’s men. He continues recovery from an ankle injury he has had since July 22nd, with the expected return date for the midfielder being around mid-November.

Coupled with the midweek exertions in the Champions League against Shakhtar Donetsk, Ancelotti will have a delicate balancing act to achieve between the players’ recovery and the hosts’ need to choose a strong side to win three points.

Andoni Iraola will only have to worry about Martin Merquelanz as the only absentee for his selection at the Bernabeu match.

The rest of the squad have a clean bill of health, and they have had a whole week to prepare for this outing, even as Real Madrid have had an important midweek Champions League match.

Vinicius Junior is increasingly becoming the most influential player under Carlo Ancelotti. He was decisive again in the match against Elche, notching a crucial brace to earn Los Blancos a 2-1 victory.

Ancelotti will be hoping that Vinicius will keep his good run of form going, especially with the well-documented injury problems that Hazard has faced since he signed for Real Madrid.

He is a dangerous man with his pace and eye for goal, and he will be expected to be decisive for Los Blancos again this weekend.

Radamel Falcao has notched four goals in his first seven outings for Rayo Vallecano, as they have made an impressive return to Spain’s top flight.

In the recent 1-0 triumph over Barcelona, Falcao was the hero for Los Franjirrojos; he will be the main danger man for Andoni Iraola’s men as they seek to go against history and win at the Bernabeu.

In December 2015, Real Madrid thrashed Rayo Vallecano 10-2; the biggest recorded wins ever for Los Blancos. Expect Madrid to make a quick attacking start to the game as they set about getting the early goal.

Rayo Vallecano will look to absorb the pressure, keep some tidy possession, and look to fashion some chances against the Real Madrid rear guard.

But Real Madrid have enough quality and momentum to take all three points from this match.

Make sure to bet on Real Madrid vs Rayo Vallecano with 22Bet!