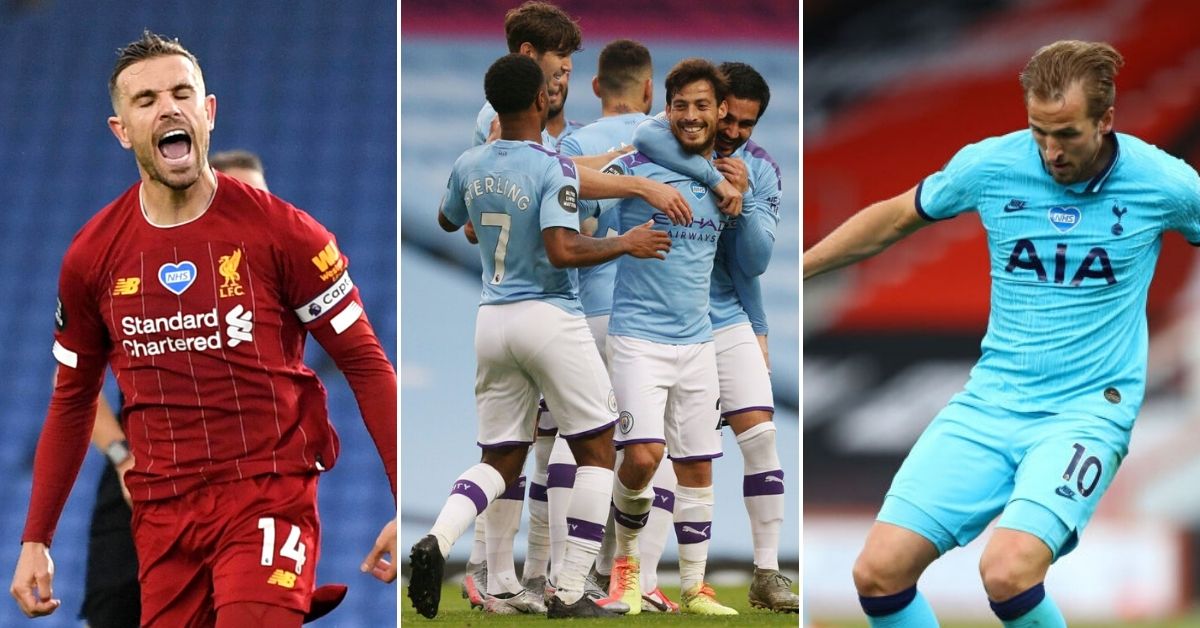 34 down, four more to go! Check out everything that went down on Tuesday, when six clubs took to the pitch to kick-off Matchweek 34 in classic Premier League style! Wednesday night treated us to a five-goal thriller at the Etihad and Thursday offered even more action to end Matchweek 34 on a high.

As per our prediction, Man City returned to their winning ways after thrashing poor Newcastle five goals to nil at the Etihad on Wednesday evening. Pep Guardiola’s men were on fire and netted two goals in the opening 20 minutes of the match when Gabriel Jesus finaaaaally ended his nine-game goal drought, after converting a David Silva assist. Jesus’ strike was quickly followed by Riyad Mahrez, who netted the second from a Kevin de Bruyne cross.

And can we just talk about Silva for a minute?! He has now reached ten assists in all competitions in all ten of his seasons with Man City, with his second in this game his 121st in total for the club. Also, this:

1+1 – David Silva (34) is the first player aged 34 or older to both score and assist in a Premier League game since Zlatan Ibrahimovic (35) for Manchester United against Sunderland in April 2017. Twilight. pic.twitter.com/s99NiSiDr6

But we digress; back to the Etihad, where Federico Fernandez found the back of his own net from a deflected clearance to make it 3-0 and Silva scored a sublime free-kick for goal number four. Raheem Sterling then came off the bench to make it five for City, thanks to the help of … you guessed it, David Silva.

Guardiola’s side have strengthened their second-place position (after a mishap against Southampton on Sunday), moving nine points clear of Chelsea. Newcastle United have dropped to 13th place, with 43 points.

93.7 – Manchester City completed 93.7% of their passes against Newcastle (787/840), the highest recorded figure in a Premier League game since full passing data is available (2003-04). Pollock. pic.twitter.com/RDlj2DRUjS

Liverpool found themselves two goals up in the opening eight minutes of the game at The Amex on Wednesday night. Naby Keita set up Mohamed Salah, who netted the first goal for the Champions in the sixth minute. Two minutes later, Liverpool captain (and club hero) Jordan Henderson scored an absolute stunner from 20 yards out.

It was shaping up to be a great clash when Brighton fought with real spirit and definitely deserved to pull a goal back, and then, out of nowhere, Leonardo Trossard shot a superb finish past Alisson – what a beauty.

Unfortunately for Brighton, Salah wasn’t finished for the night. The Egyptian King netted from an Andrew Robertson corner for his 19th league goal of the season to secure the final scoreline.

536 – James Milner's 536th Premier League appearance has seen him move into fifth place all-time for most games in the competition. Jimmy. pic.twitter.com/tQUxPq35QA

Just as we predicted, Liverpool have now won 30 of their 34 Premier League games this season; this is the fastest any club has ever reached 30 wins in a season in the history of the English Football League.

Contrary to our prediction, it was another bad night for Jose Mourinho et al. as Tottenham couldn’t overcome relegation-threatened Bournemouth at Vitality Stadium on Thursday night.

Their VAR drama continued as Spurs were once again denied a penalty. Harry Kane appeared to be pushed over at the back post by Bournemouth’s Joshua King for what seemed to be a legit claim for a kick from the spot, but alas, VAR agreed with the ref’s decision and nothing was given.

But it’s not like VAR has specifically chosen Mourinho’s men to bully. Callum Wilson had a disallowed goal, which was the sixth time that Tottenham have conceded a Premier League goal, which was later been ruled out by VAR – only Brighton and Southampton (both seven) have benefitted from this more times in the competition. So take the good with the bad…

The 25-foul-ridden clash saw 12 minutes of extra time and ended in a goalless draw after Spurs failed to manage a single shot on target.

Tottenham are ninth, with 49 points, whilst Bournemouth are 18th with 28 points.

Sheffield beat Wolves by one goal on Wednesday evening in a thriller clash at Bramall Lane. John Egan netted in the last minute of play to give Sheffield much-needed victory. They now sit in seventh place with 51 points, just one point behind Wolves.

West Ham lost to Burnley at the London Stadium on Wednesday night in another great clash that saw Jay Rodriguez’s winner edge the visitors closer to a Europa League spot, whilst the Hammers were left to sulk in regret of missing numerous chances during the match. Burnley are now tenth on the table with 49 points and West Ham could fear relegation as they sit in 16th, with 31 points.

13 – West Ham are on a run of 13 Premier League matches without a clean sheet – only Bournemouth (16) are on a longer current run without a shutout. They last had a worse run back in December 2009 (15 games). Issues. pic.twitter.com/AcscV2LeMp

Everton and Southampton drew 1-1 at Goodison Park on Thursday evening. The entertaining mid-table match saw Danny Ings continue his great goalscoring season. He has now opened the scoring in nine separate Premier League games in 2019/20 – more than any other player. Everton found the equalizer minutes later thanks to Richarlison, who has become the fifth Brazilian to reach 30 league goals in the history of the competition. Everton sit 11th with 45 points, just one ahead of Southampton.

Just as we predicted, Manchester United beat bottom side Aston Villa 3-0 at Villa Park on Thursday night. Bruno Fernandes netted a VAR-confirmed penalty to kick things off and starlet Mason Greenwood gave United a two-goal lead with yet another superb strike by the youngster just before the break. Villa were actually having a relatively good game and a few missed opportunities but Paul Pogba secured the final scoreline with a fantastic goal from outside the box.

3 – Mason Greenwood is only the second teenager to score in three consecutive Premier League appearances for Manchester United (18y 282d), following on from Wayne Rooney back in February 2005 (19y 125d). Cubs. pic.twitter.com/B4ujuCRwaN

That’s it from Matchweek 34, we’ll see you back here on Monday for the round-up and highlights of Matchweek 35! Make sure to place your bets with 22Bet!