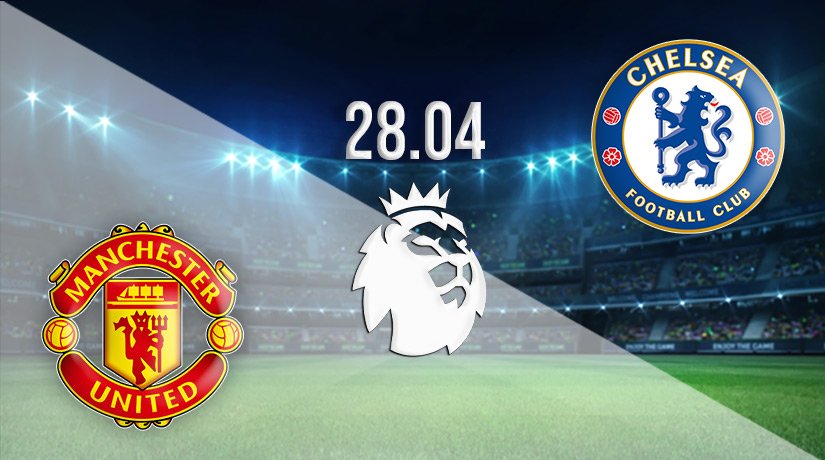 All the attention this midweek is on the UEFA competitions with the semi-finals of the Champions League on Tuesday and Wednesday with the last four of the Europa League on Thursday. You will find previews of the biggest matches free of charge on this site as our team of football writers aim to help you correctly predict the outcome of the games that have the inhabitants of planet football talking.

In this article, we have something for followers of the English Premier League with form and stats to go on. Manchester United host Chelsea at Old Trafford from 19:45 GMT on Thursday evening in a match that will be shown live on television to a global audience.

Man Utd’s recent form has been woeful, and their chances of making it into the top four of the Premier League and next season’s Champions League are fading fast. They can never be discounted, though, and the visit of Chelsea will bring the fans out in their numbers, creating a special atmosphere that the players must rise to.

This will be a great night and test of character for everyone inside the home dressing room, one where the best players will want to stand up and be counted. Chelsea have been inconsistent but look set to hold their ground and finish as the best of the rest behind Man City and Liverpool, who are battling it out for the title.

The Red Devils and the Blues last met on Premier League action back in November at Stamford Bridge when playing out a 1-1 draw. The goals that day were scored by Sancho and Jorginho.

That share of the spoils means each of the last three games involving these teams have ended all square with the two meetings before producing goalless draws. Will we see another share of the spoils at Old Trafford? That’s a result that will suit the visitors more than their opponents.

United are on a losing run

Man Utd set up for this match having won only one of their last five games in the Premier League, form that has dragged them down to sixth in the table. They have accumulated 54 points so far this season which means they are already six off Arsenal in fourth place with time running out to catch the Gunners.

The race for fourth with be every bit as exciting as the one for top spot in the league with three teams in with a shout, Spurs in the mix with Man Utd and Arsenal. That is certain to go right down to the wire, but failure to take something from this contest would seriously damage United’s chances. We are at the stage of the season where there is no room for error.

We last saw the Red Devils in action on Saturday when they were soundly beaten by an impressive Arsenal side at the Emirates Stadium. That match had been billed as a pick-em contest with both teams capable of winning the points, but at the full-time whistle, there were no doubts about who the better team was. The Gunners won by a 3-1 scoreline with the goals credited to Tavares, Saka and Xhaka, while United scored what proved to be nothing more than a consolation through Ronaldo.

CR7 made headlines with his 100th goal, but it was overshadowed by an impressive Arsenal who gave, arguably, their best performance of the season, leaving United chasing shadows.

That defeat for Man Utd was the second on the bounce after they went down 4-0 at Anfield in the match before. In another harsh lesson for a team that look to be lost.

They have a reason to fight until the end of the season, but many of the players appear to have already downed tools, and the general feeling amongst followers of the Premier League is most of this United team won’t be here for the opening game of next season.

Blues are stuttering to a finish

Chelsea fans have been put through the wringer this season, enjoying the highs of leading the table earlier in the campaign, followed by the low of being knocked out of the Champions League. The Blues famously won the European Cup last season with a 1-0 victory over Man City but fell short in their defence.

That charge to the Premier League title also unravelled, and they will watch on with little to play for in the coming weeks as Man City and Liverpool dispute the league title. A lack of consistency has cost the club in 2022, but there’s no denying the fact they are a good team, capable of beating any English opponent when playing at their best.

Chelsea’s last five league matches tell the story of how they have played this season. The Londoners have won three and lost two with that spell broken down into win, lose, win, lose, win. If they are to continue with that run, they will leave Old Trafford empty-handed, but Chelsea are coming here to win.

They have the players at their disposal to collect another three points while delivering another body blow for their opponents. This match means more to Man Utd than Chelsea, and that allows the visitors to play without pressure. They can enjoy the match and target a strong victory.

We last saw the away team on Sunday when they won a London derby against Europa League semi-finalists West Ham United at Stamford Bridge. The winning goal that day was scored by Pulisic with 90 minutes on the clock after Dawson had been sent off just a few minutes earlier.

Chelsea took advantage of their extra man but deserved the win in what was an enjoyable game for the armchair fans and those in attendance at Stamford Bridge. Chelsea are now seven points clear of Tottenham in fifth place, and that should be enough to ensure they finish in the top four and secure Champions League football for next season.

Man Utd know they must win this match if they are to remain in the running for the top four, so all the pressure will be on the home players. Chelsea would be happy with another draw from this game as a point would move them a step closer to securing third place.

Make sure to bet on Man Utd v Chelsea with 22Bet!