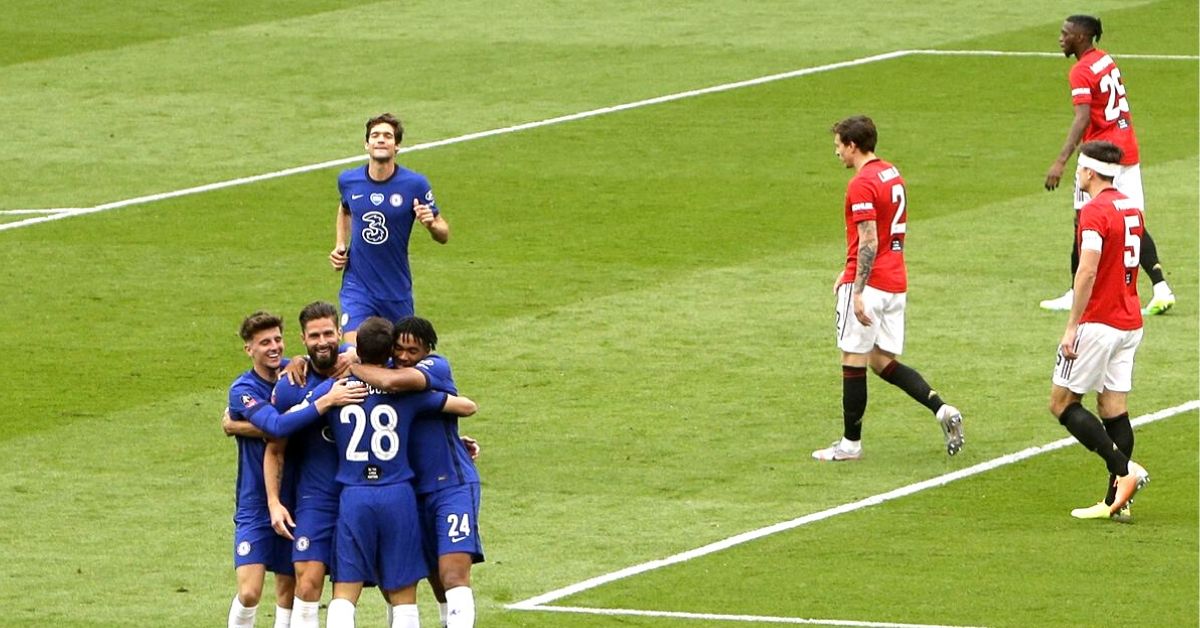 After Arsenal shocked Man City 2-0 the previous evening, it was time for the second semi-final to take place. The first half was a quiet affair predominantly dominated by Chelsea. In the opening 45 minutes, Reece James’ strike from outside the box was the best effort either side could produce. David De Gea punched it away and it seemed like the beginning of a promising match for both clubs. Check it out:

But this stunning save by De Gea was the first and only remarkable moment the Spanish goalkeeper could muster up all game; well, that’s excluding his two horrendous errors that essentially lost the match for United.

Just before the break, Eric Bailly suffered a savage head injury which added a lengthy period of stoppage time at the end of the first half. Frank Lampard’s side made sure to use the opportunity and minute 45′ + 11, Olivier Giroud gave the Blues a one-goal lead thanks to a cheeky finish at the near post.

Eric Bailly has been stretchered off with a head injury. Get well soon 🙏 pic.twitter.com/yZdNWiUHwO

Since his debut in the FA Cup in January 2013, Giroud has scored 16 goals in the competition – only Sergio Aguero (19) has netted more in this period. The Frenchman is one of the most experienced players in England and his 33 years of age speak to his intelligence in finding spaces and gaps during play, and this goal proves just that:

It wasn’t all about Giroud though. Mason Mount was exceptional throughout the game (once again). His confidence and energy bring dangerous attacks and shocking chances that more often than not turn into goals. The start of the second half was yet another punch in Manchester United’s gut as De Gea allowed Mount’s brilliant strike to slip through his fingers just a minute after the break. No player has scored more goals in all competitions for Lampard in his managerial career than Mount (18) … and he is only 21.

To finish things off and with just 15 minutes remaining, an Antonio Rudiger shot deflected off Harry Maguire past De Gea for a 3-0, recorded in the books as an own goal for the United veteran. Brutal. Then Ole Gunnar Solskjaer’s side got a consolation goal a little too late when Bruno Fernandes scored a penalty five minutes before time for the final scoreline of 1-3.

“It was a performance full of character and personality,” said Lampard but it wasn’t just Chelsea’s strength that got them to the FA Cup final, it was an evidently weaker Manchester United (ahem, De Gea?), too. Chelsea are the first side to beat them since Burnley in the Premier League back in January, ending their 19-game unbeaten run in all competitions.

3 – @Arsenal and @ChelseaFC will meet in the @EmiratesFACup final for a third time with the Gunners winning each of the previous two (2002 & 2017). Showcase. pic.twitter.com/JPWSHH0xGq

We’ll see you at the FA Cup final at Wembley on August 1st when Chelsea will clash against Arsenal in a (hopefully!) epic London derby that will go down in history. What are your predictions? Make sure to bet with 22Bet!