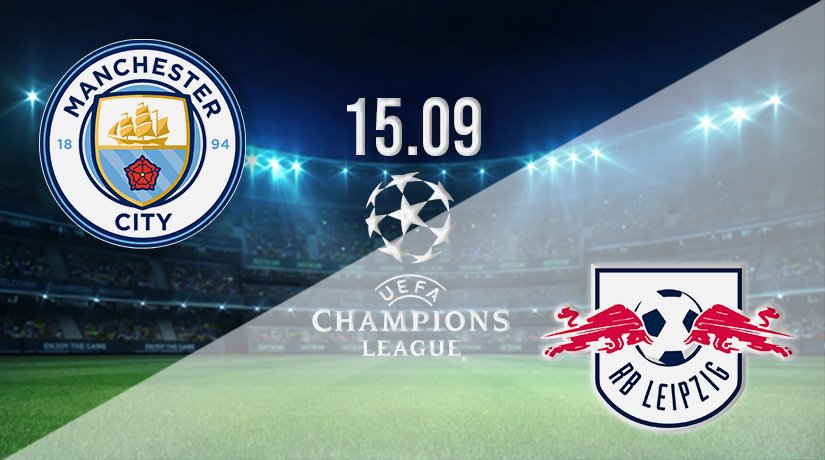 UEFA Champions League action continues Wednesday with eight matches from the four remaining groups on the schedule. Some of the competition’s big hitters are out to shine with the likes of PSG, Liverpool, Real Madrid and Inter Milan playing. In this article, we focus on one of the UK interests as Manchester City play host to German Bundesliga side RB Leipzig. This fixture is scheduled for a 20:00 kick-off and will be played out before a capacity crowd at the Etihad Stadium with millions more watching the live TV coverage.

Manchester City is one of the early favourites to win the Champions League trophy and improve on last season’s runners up finish. The Cityzens suffered the hurt of coming painfully close but it was made all the more difficult as they lost to a fellow Premier League side. Man City was shot down by Chelsea back in spring and that result still sticks in the throat of everyone connected to the club.

Pep Guardiola’s men will be going all out to get off to a winning start. They plan to take three points from this game and help secure their passage to the knockout rounds of this tournament as winners of Group A. This will be their first-ever meeting with RB Leipzig and that means there’s a piece of history up for grabs as well as the three points. Will Man City open the show with a win and delight fans or can the Germans secure a famous victory in England to spoil the party?

Manchester City are the pundits’ pick to win the Premier League and the Champions League but that was also the case last season. The board have backed their manager in the summer transfer window with Pep spending in excess of £100m on new players. That bulk of that went on Englishman Jack Grealish from Aston Villa but they missed out on bringing in Harry Kane from Tottenham for what would have been an even larger price.

The object of that continued investment is to finally get their hands on the Champions League prize after years of trying. Last season was the closest the club has ever come but they found Chelsea too good on the night. Lessons were learned in that game and with the squad looking better and stronger at the start of this season than it did at the end of the previous one, the Cityzens are ready to renew that push. Is this the campaign they finally get over the line and do the Premier League and Champions League double? Only time will tell.

The hosts warmed up for this game with a weekend win over Leicester City at the King Power Stadium. It was a match they were expected to take three points from and the players got the job done on that front but were pushed all the way by the Foxes. That game hung in the balance before City snatched the three points thanks to a 1-0 win. The goal that day was scored by Bernardo Silva with 62 minutes on the clock. A champion’s performance.

Bundesliga side RB Leipzig arrive in Manchester looking to avoid defeat and would view a share of the spoils as a decent result to get their campaign up and running. They have been dropped into a pool with the Cityzens, PSG and Club Bruges with many experts predicting they will finish in third and drop into the Europa League. Missing out on Champions League knockout football would be a real blow for the Bulls, so they must upset the odds and try to frustrate Man City and PSG. Getting something out of this match would help their cause.

RB Leipzig can be found down in 12th place in the Bundesliga after a nightmare start to the season. They have won just three of the first dozen points that have been available to them, and that has fans on edge. Their record for the early part of the campaign stands at one win against three losses, scoring five goals but conceding six. Bulls already find themselves nine points off the pace set by Wolfsburg, who boast a 100% record and lead the division.

The visitors suffered their second defeat on the bounce when thrashed by Bayern Munich at home on Saturday. It was a game they knew would be tough, but few predicted such a comfortable victory for the champions, with the Bulls beaten in every area of the field. The players make this journey to England battered and bruised, and the match could come at exactly the worst time for them.

Man City holds the home advantage, the support of the crowd and go in with the better recent form of the two. The locals will be confident in their ability to get off to a winning start, grab three points and hit the front of the group early. This is a tough pool, but a win from the opening day would set the champions of England off on the right track. Expect their usual brand of attacking football.

RB Leipzig couldn’t have imagined a worse start to the season, losing three of four league games and shipping six goals. Bayern Munich completely outclassed them at the weekend, and it will be interesting to see how the players respond to that. Will they carry the hurt with them into this match or use it to fuel a fightback? We’ll soon find out.

It won’t be easy as the stakes are so high, but if Man City are at their best and RB Leipzig haven’t recovered from that weekend mauling, it could end up a painful night for the Germans on their travels.

The pre-match betting odds available at 22bet on this Champions League fixture has Man City priced at *** for the win with RB Leipzig at *** and the draw ***.

Make sure to bet on Man City v RB Leipzig with 22Bet!