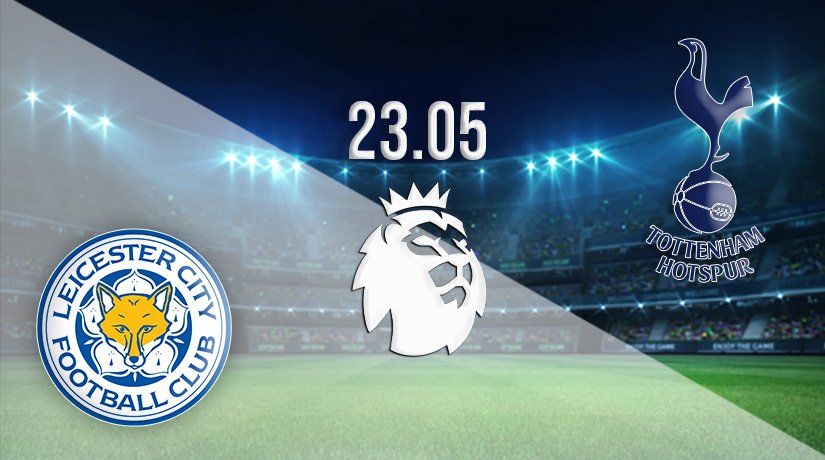 A full 10-match English Premier League programme is scheduled to be played on Sunday, with the kick-off times set at 16:00. Each match will be shown live on TV, and despite Manchester City already securing the title, there’s still plenty to play for across the top tier of English football. Teams are battling for a European finish, with others desperate to climb clear of the relegation zone. A thrilling 90 minutes awaits followers of the beautiful game before the 2020/21 season enters the history books.

In this article, our team of football writers focus on the match at the King Power Stadium, where Leicester City host Tottenham Hotspur. The hosts are just three points above Liverpool in fifth which could cost them a place in the top four and next season’s Champions League. That piles pressure on the locals. Spurs have already missed out on the top four but could drop as low as eighth if they were to lose this game. Everyone connected to the London club is set on damage limitation here.

The Foxes are out to do the double over Spurs after beating them with ease earlier in the season. Brendan Rodgers’ men scored a 2-0 victory in London late last year with the goals that day scored by Jamie Vardy and Toby Alderweireld, the latter knocking the ball into his net on the hour mark. Each of the last two games involving these teams has seen the winner claim three points without conceding.

Foxes fighting for the top four

Leicester fans will be desperate to see their team avoid a repeat of last season when falling apart in the campaign’s closing stages. The Foxes spent much of the year in the top four, just as they have this season, but lost their way in the closing weeks and dropped out of the prize places. That cost the club a spot in the Champions League, forced to enter the consolation of the Europa League. Most supporters wouldn’t think they’d once see European competition as a consolation prize, but times have changed at the King Power.

This weekend, they hunt for the top four and will be eager to get across the line without fuss. They started the week in third place with an outside chance of beating Manchester United to second but also hanging in the balance, Chelsea in fourth and Liverpool in fifth breathing down their neck. The hosts must hold their nerve and get something out of this home match. Supporters would dearly love to see their team sign off with a home win.

The locals have been unconvincing of late, winning only one of three. They followed a draw with defeat to Newcastle United at this venue but bounced back in some style. Leicester beat Manchester United 2-1 at Old Trafford earlier this month before edging Chelsea 1-0 at Wembley in the FA Cup final last weekend. The FA Cup added to a top-four finish would rank as a stunning season and provide the major with a major boost to the funds available to him in the transfer market.

Season to forget for Spurs

What started as a promising season for Tottenham has become a campaign to forget. Fans haven’t been allowed inside the club’s stunning stadium but have watched on in dismay as Jose Mourinho stumbled from one disappointing result to another. They will finish outside of the top four, which means Spurs’ last match of note in the Champions League remains that defeat to Liverpool in the final. Another summer rebuilding project lies ahead for the club, and the board will be asked to splash the cash on players once again.

Despite their poor form this season, the visiting side are finishing strongly and started the week with three wins and a defeat from four games. The spare loss came against Leeds United at Elland Road earlier this month when going down by a 3-1 scoreline. Tottenham bounced back, beating Wolves 2-0 in London last weekend with the goals coming from Kane and Hojbjerg. That was a match they were expected to win but deserve credit for getting the points in style.

There’s not much for Spurs supporters to shout about this weekend, but the players know they must sign off with a strong performance. Many in the away dressing room are playing for their futures, and that ramps up the pressure. They must show they are ready to play a part next season and good enough to drive Tottenham back into contention for the major places. A top-four finish is a must in 2022.

Leicester City has the home advantage here and carries the better form of the two sides this season. They will be eager to sign off from what has been a stunning season with another home win, and there’s no doubting the fact they have the quality to do that. If Leicester’s players are fully focussed on this match and on gaining three points, they will start as favourites with most Premier League pundits.

Tottenham fans won’t believe their club have managed to let them down once again. They had a solid foundation to build following that Champions League final appearance, but things have unravelled for the club since losing to Liverpool. The players will have one eye on the upcoming Euros, while others will be looking forward to a well-earned break. Will that have a major impact on how they perform in this game?

The pre-match betting odds at 22bet for this game has Leicester City priced at 1.992 for the win while Tottenham is 3.5 to claim three points at the King Power. Bettors struggling to separate the teams may prefer to back the draw at 3.74.

There are also many specials available for this match, including both teams to score, handicap, correct score and half time/full time. Browse what’s available at 22bet and pick out the bet that best suits you.

Make sure to bet on Leicester vs Tottenham with 22Bet!