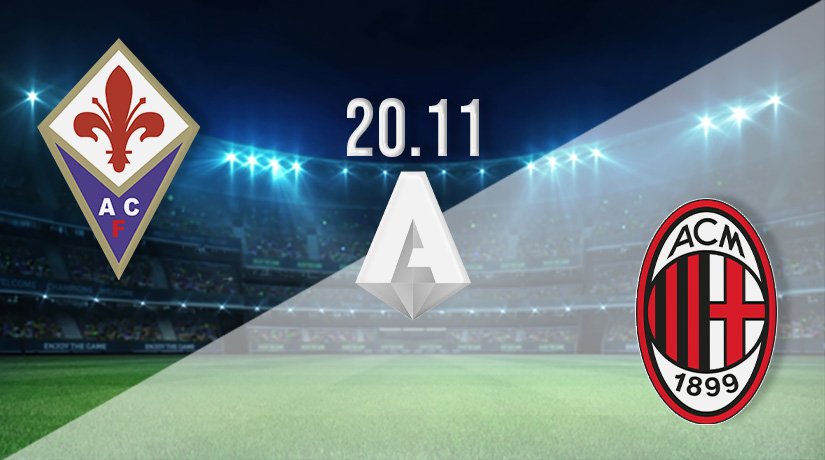 After the 1-1 draw with Inter Milan in the Derby della Madonnina, AC Milan will be back in Serie A action on Saturday as they travel to 7th-place Fiorentina at 20:45 GMT.

Fiorentina’s start to this season has been hot and cold with six victories and six losses. If Vincenzo Italiano’s men are to mount a sustained fight for Champions League places, they will have to get consistent quickly starting against in-form AC Milan.

Can Viola Inflict the First AC Milan Defeat of the Serie A Season?

The form against top-half teams has been bad at the Artemio Franchi Stadium, which does not bode well for the visit of unbeaten AC Milan. Fiorentina will have to be at their very best to get anything from this fixture.

Although AC Milan’s Champions League campaign has resulted in 1 point from four fixtures, the domestic form has resulted in 32 points from 12 matches – level with league leaders Napoli.

Milan are also unbeaten in Serie A this season, just like Napoli. This shows that Fiorentina will have their work cut out to prevent Milan from taking all three points.

Fiorentina have been victorious in five and lost five matches out of their last ten outings in Serie A. In the last five fixtures, they have lost three and won two.

The home form of Vincenzo Italiano’s side has been consistent with their overall form in the season so far; they have won three and lost two of their last five fixtures at the Artemio Franchi Stadium.

In the last ten outings, Milan have won eight and drawn two; they have picked 26 points from a possible 30. In the last five outings, the Rossoneri have won four and drawn one.

Away from home, Milan have only dropped two points all season in the 1-1 draw at Juventus. Stefan Pioli’s men have won the other five matches away from San Siro. In the process, they have collected 16 points from a possible 18.

Vincenzo Italiano will be without goalkeeper Bartlomiej Dragowski (hamstring), center-forward Aleksandr Kokorin (muscle fatigue), and defensive midfielder Erick Plugar (ankle distortion) are all expected to miss the visit of AC Milan to the Artemio Franchi Stadium.

Left winger Nicolas Gonzalez is also likely to miss the match on Saturday after testing positive for coronavirus on October 26h.

Stefan Pioli will not be able to pick goalkeepers Alessandro Plizzari (after undergoing knee surgery) and Mike Maignan (wrist injury).

The Rossoneri will also be without center back Alessio Ramagnoli (torn abductor muscle) and right back Davide Calabria (calf problem) in the match against Fiorentina.

Samu Castillejo is also a doubt for the match on Saturday as he bids to recover from a hamstring injury.

Dušan Vlahović has been a crucial cog of the Viola attacking play this season. He leads the line, holds up play, and brings other into play in the attacking phase of Vincenzo Italiano’s team.

The Serbian’s goals have nee essential in netting Viola’s victories this season, and will be especially important when Fiorentina face the in-form Rossoneri.

The evergreen Ibrahimovic is a leader on the pitch as well as a lethal striker that can pounce and convert the Milan play into goals.

As the race for the Scudetto heats up, the experience of Ibrahimovic will be invaluable to Stefan Pioli’s side as they seek to put pressure on Napoli at the top of the table.

AC Milan will be under pressure to win this match and keep pressure on Napoli while keeping the distance to third-placed Inter Milan.

Expect the Rossoneri to start with high energy and working the ball intelligently. Viola will seek to remain compact and fashion their own chances at the other end.

AC Milan are in very good form currently in Serie A, and they will have too much for Fiorentina. Milan will take all three points.

Make sure to bet on Fiorentina vs AC Milan with 22Bet!