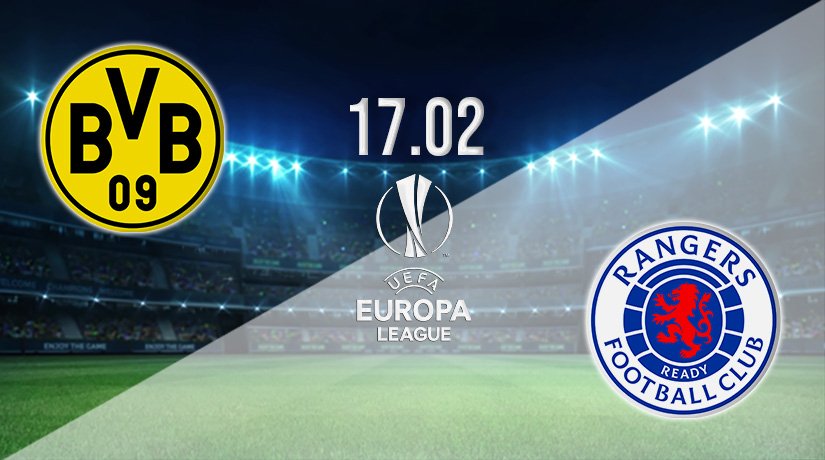 Borussia Dortmund will host Rangers at the BVB Stadion Dortmund on Thursday in the first leg of a Europa round-of-32 fixture at 18:45GMT.

Will Borussia Leverage the Home Advantage to Take a Giant Step Towards the Round of 16?

The BVB Stadion Dortmund is renowned globally for the atmosphere it can generate; when the yellow wall gets going, opponents can find life difficult when playing Borussia Dortmund.

Marco Rose’s men will be looking to leverage this energy when they face Rangers on Thursday.

Trailing Bayern Munich by six points in the Bundesliga, Dortmund will view the Europa League as the most promising source of silverware this season.

Marco Rose will take the match against Ranger seriously and prepare his team accordingly. A robust first leg will take pressure away from Borussia when they visit the Ibrox Stadium in Scotland.

Will Rangers get a Result in Germany ahead of the Home Leg in the Ibrox Stadium?

Giovanni van Bronckhorst will take Rangers to Germany to face Borussia Dortmund off the back of inconsistent form in the SLP.

They have dropped five points over the last five rounds of SPL fixtures, which has seen them fall one point behind league leaders Celtic. The gaffer will be looking to shore up their form for the Europa League and the title fight with Celtic.

Rangers will be aware of the quality that Borussia possess, especially in front of the home crowd, and will be looking to make themselves hard to beat.

The form of Marco Rose’s men over the last six Bundesliga outings has remained steady. They have won four matches while losing two. They have hauled 12 points while dropping six.

The return of 12 points from the last six matches is similar to RB Leipzig and Bayern Munich, and it is only bettered by Bayer Leverkusen within 13 points from six outings.

The result for Dortmund has been a gap of six points behind Bayern Munich remaining intact. They will be looking to progress to the round of 16 as they seek to maintain a chance of winning silverware this season.

Rangers have been on an indifferent run of form in the SPL. They have won three fixtures, drawn two, and lost one. The loss was a crashing 3-0 to their title rivals Celtic.

As a result, Rangers are now second on the table, a point behind the league leaders Celtic.

Bronckhorst will focus on eliminating the inconsistency ahead of a crucial clash against Borussia Dortmund in Germany on Thursday.

Marco Rose will be without a few key players for the clash against Rangers on Thursday. Left-back Marcel Schmelzer is a doubt as he recovers from knee surgery. Right-back Mateu Morey Bauza is nursing an injury to his cruciate ligament.

Star striker Erling Haalad is also a doubt; the 21-year-old is facing muscular problems that make him a doubt for the clash against Rangers.

Right-back Thomas Meunier also suffered a knock on February 10th, which might rule him out of the Thursday clash.

Central midfielder Nnamdu Ofoborh was diagnosed with a heart condition on July 16th 2021; the 22-year-old is a doubt for the match against Dortmund.

Attacking midfielder Ianis Hagi is also nursing a knee injury; the 23-year-old underwent surgery, which means he will not be available until July.

His goals and attacking play are crucial for Dortmund, especially in the absence of Erling Haaland.

The striker provides an outlet upfront, runs in behind, and has a robust finishing touch. Morelos will be crucial for Rangers on Thursday up against Dortmund.

Expect Borussia Dortmund to play on the front foot, dominating possession, and pressing Rangers across the pitch.

Rangers will look to absorb the pressure and hit Dortmund on the counter.

Borussia Dortmund, playing at home, will be highly favoured to win and be on the driving seat ahead of the return leg at the Ibrox Stadium.

Make sure to bet on Borussia Dortmund vs Rangers with 22Bet!