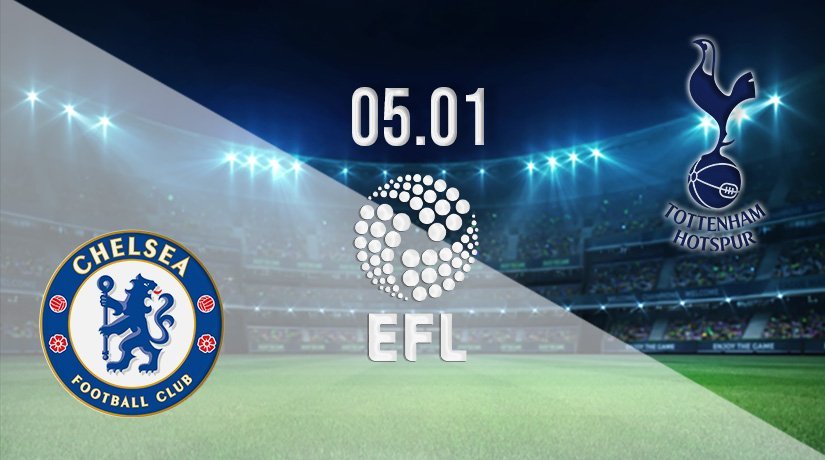 Attentions turn to the EFL Cup for followers of English football this midweek with the first leg of the semi-finals scheduled for Wednesday and Thursday. Both matches will be shown live on television to a global audience as four teams battle for a place at Wembley and crack at the first available piece of silverware this season. You can follow the previews and predictions of our professional team of football writers free on this site, starting with a London derby. Chelsea aims to bounce back from a weekend defeat at home to Liverpool by grabbing an advantage over Tottenham on Wednesday.

The Blues have suffered a difficult few weeks in the Premier League but remain in the hunt for a top-four finish and place in next season’s UEFA Champions League. Their title challenge is looking weak, meaning the players camped inside the home dressing room will welcome the distraction of cup football. The perfect way to bounce back and get followers back on side is to put this cup tie to bet at the earliest opportunity.

Chelsea and Spurs have given us some memorable games over the years, but it’s the home team that has dominated, winning 74 games against the 54 of Tottenham and 42 draws. In this competition, Chelsea has five wins with Spurs on three and three games ending in a draw. The most recent game involving these teams came earlier this season when Chelsea won 3-0 away from home. Will they do the double at Stamford Bridge or can Spurs get their revenge with an away win?

Chelsea slug it out against Reds

This semi-final first leg match comes hot on the heels of Chelsea’s weekend slugfest with Liverpool at Stamford Bridge. The Reds raced into an early 2-0 lead in London and looked likely to build on that, punishing their hosts in front of their own fans. It appeared to be a case of how many Liverpool would score and a case of damage limitation for the home team, but Chelsea fought back. They found the net twice in quick succession at the end of the first half to head into the break level, but neither team could find a winner and looked happy enough with a share of the spoils.

Chelsea were last seen in EFL Cup action before Christmas when doing as expected and breezing past neighbours Brentford in the previous round. A trip to a Bees team high on confidence was seen as a potential banana skin for the Blues, but they dealt with it, getting their name in the hat for the next round thanks to a 2-0 away win. The goals that day came from a Jansson own goal on 80 minutes and a late penalty scored by Jorginho with 85 minutes on the clock. The 2-0 scoreline suggests a comfortable match, but both goals came in the final 10 minutes.

Everyone connected to the Chelsea cause will believe they are good enough to win this match and the tie. With Champions League involvement and the title race still alive, winning the EFL Cup won’t be anywhere near the top of their priorities. Still, it’s an excellent chance for the manager and a team that has come under pressure to add another piece of silverware to their collection. Chelsea’s league challenge has faltered this winter, and they may see a cup win as the perfect tonic as they prepare to hunt down runaway leaders Manchester City.

Tottenham faces a crucial second half to the Premier League season as they aim to battle their way into the top four and return to UEFA Champions League football next term. A top-four finish is the club’s number one priority this term, and they are growing into the challenge after a sticky spell and change of manager. Spurs are improving, and their recent league form shows they enjoy an extended unbeaten run, taking 11 of the last 15 points available to them. The Londoners have forced their way into sixth place and are within touching distance of rivals Arsenal and the prize places.

Making it to the top four and staying there will dominate the minds of everyone at the club, but if the players can make it past Chelsea and secure their place in the final, it would give the fans something to look forward to, a day out at Wembley Stadium. Getting past Chelsea over two legs won’t be easy, but Spurs have a side that is growing in confidence and have shown in the past they have a talent for grinding out results, especially in knockout football. They don’t need an away win to go through, but victory at Stamford Bridge would hand Spurs the advantage ahead of the return leg.

Tottenham have recent experience of beating a neighbour in this tournament, having passed high flying West Ham United in the previous round. Spurs enjoyed home advantage for that match and won 2-1 thanks to goals from Bergwijn and Lucas Moura, which was enough to better a reply from Bowen. All three goals were scored in a crazy five-minute period, but the Hammers, despite creating chances in the second half, were unable to get level. Spurs were deserved winners and marched on to the semi-final.

Chelsea enjoys the home advantage and knows they must make it count if they are to book their place in the final. The locals have been better than their opponents in the Premier League this season and will hope to carry that form into this cup game. If Chelsea play to the best of their abilities, cheered on by a large support, they should have enough to secure the victory and take a step closer to winning the cup.

Tottenham would love to secure the win but know if they can avoid defeat, it would give them an advantage. Spurs hold the home advantage in the second leg, which will be played at the Tottenham Hotspur Stadium on 12th January. Spurs must ensure the tie remains live ahead of that game, and the work done here could prove the difference between going through and being eliminated.

The pre-match betting odds available at 22bet on this EFL Cup semi-final match has Chelsea at 1.99 to win this game with Tottenham at 3.78 and the draw 3.48.

Make sure to bet on Chelsea v Tottenham with 22Bet!