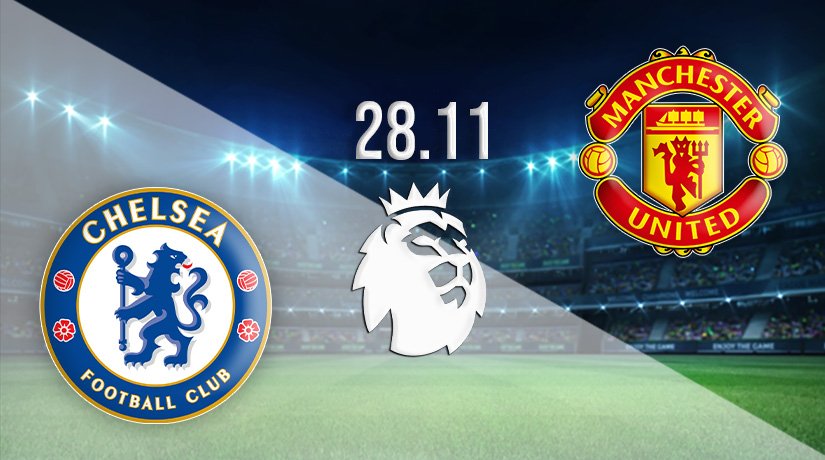 Followers of the English Premier League have a fascinating match on their hands this weekend as league leaders Chelsea play host to a Manchester United side on a dreadful run of form and one that cost Ole Gunnar Solskjaer his job as manager of the club. The players camped inside the away dressing room must take their share of the blame for that one and it’ll be interesting to see how they respond in this trip to Stamford Bridge. All eyes will be on this match and armchair fans can follow the play from 16:30 GMT on Sunday.

Chelsea are the current Premier League pace-setters and there has been little in their recent form to suggest they are about to slow down anytime soon. The Blues won the Champions League last season by beating Manchester City in an all-English final and, at present, they look capable of winning the Premier League trophy, wrestling that from the Cityzens also. A win on their patch over a respected side like Manchester United would serve as a reminder that this team is serious about going all the way.

The Blues and the Red Devils have served up some memorable matches over the years and neutrals hope this proves to be another game packed with goals and talking points. The most recent game involving Chelsea and Man Utd was played back in February last season when the teams fought out a tense goalless finish. Followers of the stats may be interested to know that each of the last two games involving Chelsea and Man Utd have ended 0-0. Will we see a third goalless draw or can the sides finally find a way through?

Blues are the team to beat

In the first dozen matches of the season, Chelsea have set themselves apart as the team to beat. The Londoners have raced into an early lead and are showing no signs of slowing down. They are top of the table at this stage and fully deserve their lofty position. Results don’t lie at this level and Chelsea have shown themselves to be the strongest team. They head into this home match with stats of nine wins and two draws against just one defeat with an incredible 30 goals scored and only four conceded. That is quite breathtaking and if they are able to match that run throughout winter they could end as solid champions.

The Blues have taken 13 of the last 15 points available to them with four wins and a draw. The spare came just before the international break when Chelsea were shocked at this venue by lowly Burnley, the Clarets leaving London with a share of the spoils thanks to a 1-1 finish. That was a game Chelsea were expected to win by at least two clear goals but they took the lead inside 33 minutes thanks to a goal from Havertz. The Blues then appeared to take their eye off the ball and after passing up numerous chances to extend their lead, they conceded late to a Vydra equaliser.

Since dropping two points at home to Burnley, the locals have returned to winning ways and they did so in style when crushing Leicester City 3-0 at the King Power Stadium last week. They may have been delayed by the international break when the World Cup qualifying groups concluded across Europe but the players showed a determination to win and it paid off. Goals from Rudiger, Kante and Pulisic ensured they left with all three points while heaping pressure on Foxes boss Brendan Rodgers who watched his men slip further down the table.

There is a lot going on at Manchester United at the minute following the sacking of Ole Gunnar Solskjaer. Sections of the fans had been calling for their gaffer’s head for months now, and four defeats from five in the Premier League turned sections of the crowd into the majority of the crowd. The board, who had publicly backed the manager in recent weeks, finally had enough and sacked the former player. He now moves on, leaving the club down in eighth place in the league table, a dozen points behind leaders Chelsea and six behind West Ham and the top four.

Man United bring season stats of five wins and two draws against five defeats, scoring, scoring 20 goals but conceding 21. Those numbers show the Red Devils have leaked more goals than Burnley, who are third from the bottom of the table and stuck in the relegation zone, staring at the prospect of being relegated to the Championship in spring. That is alarming news for everyone invested in the club. Man Utd have taken a step backwards since finishing as runners up in the Premier League and Europa League last season.

The straw that broke the camel’s back in terms of Ole losing his job was the defeat last weekend in London to Watford. The Hornets are struggling for wins this term, and many expect them to spend much of the campaign fighting against relegation, but they had more than enough to beat United, despite having a penalty saved by David de Gea at 0-0. Watford hammered United 4-1, and it could have been more. The team has turned in some poor displays under Ole, but that was the worst. The board were left with no alternative to swapping the manager after taking three points from the last 15 on the table.

Chelsea and Man Utd are often involved in tense battles, with both teams looking to hurt the other on the break, punishing any mistakes. In this match, though, we have a side flying high at the top of the table, looking every inch a champion this season with home advantage over an opponent that is going backwards, losing matches and having to change their manager. If this match was to follow the form, it would produce an epic home win.

Man Utd are now in a transitional period, but it’s one they must get right. The players must now raise their game if they are to keep their place in the team. The likes of Cristiano Ronaldo and Bruno Fernandes have carried the passengers for too long now. Those who continue to turn in poor performances will likely be sold in January.

Make sure to bet on Chelsea v Man Utd with 22Bet!