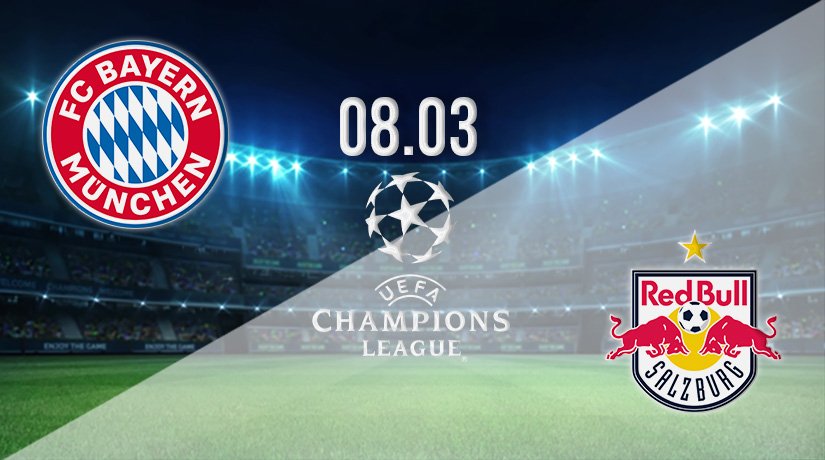 German Bundesliga champions Bayern Munich are the firm favourites with many respected pundits to win this season’s UEFA Champions League and reclaim their position at the head of European football. FCB and Manchester City have been the two most popular picks to lift the trophy this spring at the Stade de France in Paris. We get another look at Munich on Tuesday evening when they host RB Salzburg in this Round of 16 second leg. With the tie locked at 1-1 following a draw in Salzburg, there’s now all to play for in Germany. Which side will win this match and progress to the quarter-finals, keeping their dreams alive?

Munich were expected to be in a position of control by this stage of the tie, but they were matched by Red Bull last time, meaning this one will go right down to the wire. Bayern will plan to use the home advantage to rack up a comfortable lead and ensure they get their name in the hat for the next round. It’s a case of more of the same from the Bulls who performed well at home and have cause to be confident but know there’s plenty of work still to be done. They know they must win in Germany, and that’s no mean feat, but anything can happen in this competition, as we have seen many times in the past.

The stats sheet shows Bayern Munich and RB Salzburg have met only three times previously on competitive action, with all three games played in the Champions League. The first recorded meeting of the teams was in November 2020 when Bayern Munich scored an emphatic 6-2 away win before easing to a 3-1 victory at this venue. Then the pair renewed rivalries last month when Bayern Munich were expected to win at a canter but needed a 90th-minute equaliser to avoid defeat. This game hangs in the balance and will be a tense evening for both teams but an enjoyable game for the neutrals who will watch live on TV.

Munich forced to fight back

Despite playing the first leg away from home, Bayern Munich was expected to put this tie to bed at the earliest opportunity. They headed to Salzburg with a team capable of scoring a few goals, winning the game and putting the last 16 match out of the reach of their opponents. But things rarely go to plan in the Champions League, and the giants of German football were put through the grinder by their opponent. FCB found RB Salzburg to be a dogged and determined opponent, one willing to put their bodies on the line for the cause. If Munich believed they had drawn one of the weaker sides in the tournament, they received a harsh reality check.

Salzburg upset the odds by taking a draw from the first leg and keeping this tie alive, but Munich needed a generous slice of fortune to avoid defeat. The Germans fell behind inside the opening 21 minutes of the game when Adamu struck the game’s opening goal. It came against the run of play and was a body blow to FCB, who took their time to re-settle. With the game heading towards a stunning 1-0 win for the Bulls, there was to be one final twist in the tale as Munich struck late to pull level. Coman scored on the stroke of 90 minutes to make it 1-1 and ensure Bayern remain the favourites to progress to the quarter-finals.

The match stats from the first leg showed just how big a surprise that draw was. Bayern Munich finished the game with 72% of the ball possession, 22 shots at goal and nine on target. They forced a total of 10 corners but struggled to make their dominance pay. Now playing at home, Bayern Munich fans will want to see a more ruthless version of their team. They want to see plenty more chances created and a few more goals scored.

Bulls remain in the fight

When the draw was made for the Round of 16, Red Bull Salzburg had every right to feel hard done by. They had impressed during the group stages, only to draw one of the pre-competition favourites to win the trophy. Most expected them to be swept aside over two legs and suffer a couple of heavy defeats, but Salzburg proved more than a match for their opponents at home. They travel to Germany as the underdogs once again but will be quietly confident they have what it takes to make life difficult for their hosts in Munich and nick a win to progress to the next round.

Going through is a big ask, even at this stage, but RB Salzburg are in a great position, and a place in the quarter-finals remains a possibility. That’s all the fans could ask for from their team. The tie remains live and there to be won. You can be sure that regardless of the result – win, lose or draw – Salzburg will give their best in Germany and ensure this is an entertaining watch.

Salzburg made history in the first leg when fielding the youngest side we’ve seen in this competition since Ajax in 2003. The coaching staff placed a lot of trust in their young guns that evening, and they got the rewards. We’ll likely see a similar, if not identical, starting 11 for this match as we saw from RB in Salzburg for the first leg. The players have already shown they belong at this level and are up for the challenge.

Bayern Munich have the quality, experience and home advantage to progress. They started slowly in the first leg, so we expect them to explode from the traps at home. If Munich get the first goal, they should kill the game off quickly.

Make sure to bet on Bayern Munich v RB Salzburg with 22Bet!