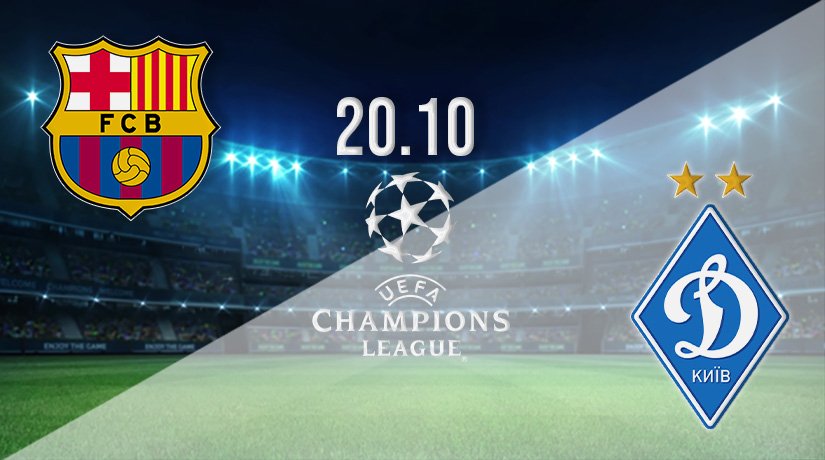 Buoyed by their domestic victory over rivals Valencia over the weekend, the Blaugrana will be looking to get back on solid footing in their European campaign when they take to the pitch on Wednesday to face Ukrainian champions Dynamo Kyiv at 8 PM GMT. Languishing at 7th in La Liga and at the bottom of Group E in the Champions League, Barcelona has had a rough start to the season.

Dynamo Kyiv will be glad to visit Camp Nou at such a time where nothing seems to go right for Ronald Koeman’s men. The Ukrainian powerhouse has been on a cruise domestically with 4 wins and a draw in their last five matches. However, they are yet to win a Champions League match, with their solitary point earned from the draw against Benfica.

Both teams are yet to secure a win in the Group stages of the Champions League this season. Barcelona emerged victorious in the four previous meetings, with Dynamo Kyiv managing a total of 2 goals against Barca’s 10. The Spanish powerhouse may be weak now, but this match will be Barca’s to lose.

Looking at Dynamo Kyiv’s record against Spanish opposition, we have to go way back to 1999 when Andri Shevchenko’s double helped register a win against Real Madrid. On the other hand, Barca’s last defeat to Ukrainian opposition was against visiting Shakhtar Donetsk in 2008 when they met in the Champions League Group Stages.

While history does not shine favorably on the Ukrainian side, Barcelona’s recent form shows that the Spanish powerhouse is no longer the sure bet of old. The Catalan side exited the competition last season in the round of 16, shipping 4 goals against Paris St. Germain at home. On matchday 1, Barca lost to Bayern Munich, which is the first time they have lost three consecutive group matches. Their problems were compounded with the 3-0 loss against Benfica

Despite all that, expect Barcelona to carry the day. Ronald Koeman will hope to repay the show of public support from the Barca board with a turn of fortunes in Europe. The Catalan giants came from behind at the weekend to secure a 3-1 victory against Valencia, with Memphis Depay, Ansu Fati, and Phillippe Coutinho securing the goals. The fighting spirit and never say die attitude is well and alive within the walls of the Catalan club.

In their first outing in the European competition as automatic qualifiers, Dynamo Kyiv will be seeking to ride the euphoria of the first league title since 2016 and their unbeaten domestic record to climb the mountain and secure the win. The Ukrainian side will be boosted by the return of key players, including Vitaliy Buyalskiy and Vitaliy Mykolenko, who played over the weekend after their adductor problems were resolved. In particular, Vitaliy Buyalskiy is a man to watch, having racked up 6 goals this season, including one this past weekend.

The former Manchester United winger revived his career at Lyon and managed 20 league goals last season. He has been one of the few shining lights this season at Camp Nou with 4 goals and 2 assists so far. He will be keen to open his Champions League account on Wednesday night

His calf injury has prevented his debut, but he finally entered the pitch during the weekend in the game’s final moments versus Valencia. The Argentine is a prolific goal scorer and left Manchester City in May this year as the club’s leading goal scorer. While he may not have the match fitness to be named in the starting line-up, he will offer Ronald Koeman a game-changing option on the bench.

The Dynamo Kyiv player has hit a purple patch, having scored a brace on the weekend to make it his most productive campaign since 2016/17 with 5 goals so far this season.

He is the top scorer in the domestic league with 8 goals and will look to add some continental goals to his statistics.

Expect Barcelona to take full advantage of a weak opposition to redeem themselves in front of their home fans, who have only witnessed two wins from seven games in all competitions. This is a crucial fixture that will determine whether Barcelona fails to proceed out of the group stages for the first time since 2000/01.

The positive news for Dynamo Kyiv is that Barcelona has not kept a clean sheet at home since November 2019. This season, the Catalan giants find themselves in a precarious position, losing their key player and 6-time Ballon d’Or winner, Lionel Messi. The player’s exit resulted from unwise transfer decisions, the COVID-19 pandemic, and an inflated wage bill. In the summer, few additions were made to the team.

Despite the off-field issues, the Blaugrana faces a critical week that could make or break their season. Expect the manager and the players to be highly motivated to demonstrate their capabilities on Wednesday when they take on Dynamo Kyiv.

The fans inside the Camp Nou will be the 12th man that adds extra energy to the players to dispatch the opposition. Ronald Koeman is aware that despite off-field issues and public support from the board, results will be the only way of guaranteeing his employment. Expect to see an aggressive home team seeking to prove the point that despite the lack of marquee players, Barca’s remains a powerful force in European football.

Make sure to bet on Barcelona vs Dynamo Kyiv with 22Bet!