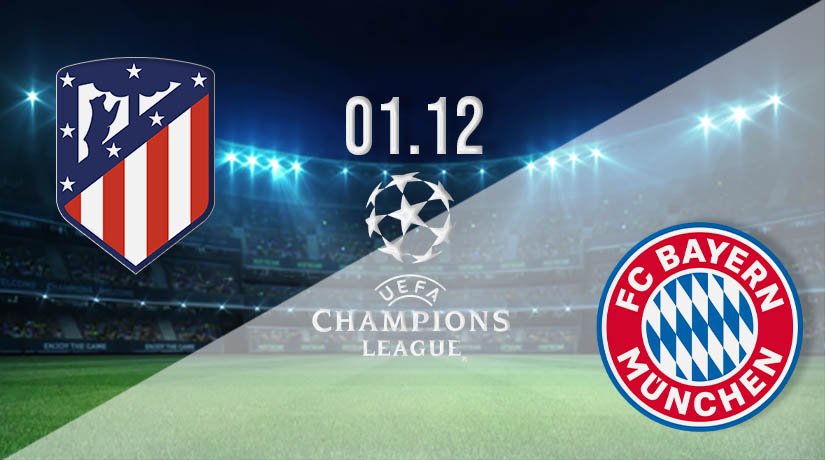 The opening day of December brings another busy evening of action from the Champions League group stages with many pools still extremely competitive. It’s matchday five and Atletico Madrid enjoy a home advantage over Bayern Munich in Group A with both sides going in on the back of a recent unbeaten record.

These sides have faced-off seven times in the past with Bayern Munich bagging four wins against the two for Atletico Madrid and one draw. The German Bundesliga giants had no trouble collecting the points last time, easing to a 4-0 home win over Madrid in October. They have already secured their place in the next round of the competition and it’ll be interesting to see how seriously they take this.

Atletico Madrid are second in the group with their stats for the campaign showing one win against two draws and a defeat, the spare loss inflicted by Munich. The La Liga side bounced back from defeat in Munich and are unbeaten in their last three, scoring a win followed by back-to-back draws. The five points on the board leaves them seven behind Bayern and two ahead of Lokomotiv Moscow in third.

Madrid scored a weekend win over Valencia in La Liga, scraping a 1-0 on their travels. Latorre knocked the ball into his net under heavy pressure for an own goal and that was enough to see Atletico sneak the win. The home team have now kept a clean sheet in each of their last four games in all competitions.

Munich battle back to beat Stuttgart

Bayern Munich are top of Group A with their form so far showing a perfect four wins from four games. A dozen points on the board means they have safely secured their place in the next stage with nearest rivals Atletico already seven behind. Munich were expected to win the pool and they have done that with ease.

Munich were last seen dishing out an impressive 3-1 defeat to Stuttgart on their patch in Bundesliga on Saturday. The visitors continued their devastating form thanks to goals from Coman, Lewandowski and Douglas Costa. Munich did go 1-0 down in that game but the eventual winner was never in doubt.

Atletico Madrid are up against it here, but they do have the home advantage, are on an unbeaten run and their defence is in great shape. They will need that strong backline to be at their best here if they are to get anything out of this.

Bayern Munich haven’t put a foot wrong in the Champions League so far and they could finish with maximum points which would send out a message of intent to the rest of the competition. Munich will believe they have what it takes to go all the way this season.

Make sure to bet on Atletico Madrid vs Bayern Munich with 22Bet!