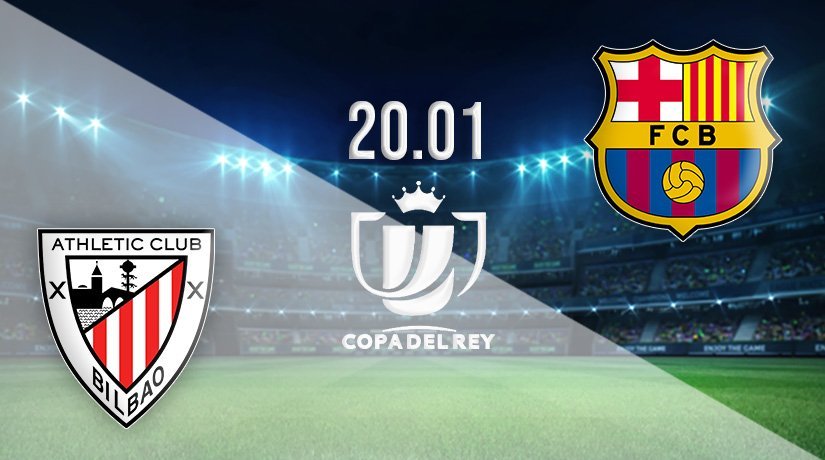 Thursday’s schedule brings two matches from the Copa del Rey and there are some big-name teams involved. The action begins at 18:00 when Elche face the unenviable task of playing Real Madrid, trying to knock the La Liga leaders out of the cup. Then attention turns to Athletic Bilbao v Barcelona which is scheduled for 20:30 GMT and will be shown live on television to a huge European audience. In this preview, we focus on the top of the bill battle involving Bilbao and Barca.

Bilbao hold the home advantage and will be eager to make that count but eliminating Barcelona from the tournament won’t come easy. Barca already appear to be out of the running for the La Liga title with Real Madrid sitting pretty at the top of the division and showing no sign of slowing down. That puts pressure on the management and players to come good in this tournament and deliver a trophy to their fans. How will they react to that? We will get a better idea at the close of play on Thursday.

This will be the second meeting of Athletic Bilbao and Barcelona this season after the pair played out a tense 1-1 draw in La Liga back in August. Inigo Martinez scored the opener that day with 50 minutes on the clock but Memphis Depay hit back on 75 minutes to rescue a draw and share of the spoils for his team. Eric Garcia was sent off near the end and neutrals planning to tune in to this match will hope for plenty more drama in this renewal.

Battling Bilbao can’t be written off

Athletic Bilbao knows wins over Barcelona don’t come easy but, as any follower of Spanish football knows, the Barca of this season are far removed from the team that dominated Spanish and European football over the years. They are a side stuck in a transitional period and that will give encouragement to the Athletic Bilbao players and coaching staff. They know they have the home advantage and if they play anywhere near the best of their abilities they have a real chance of achieving something memorable in this match. That will ensure the locals head into this contest in high spirits.

In La Liga, Athletic Bilbao can be found in midtable following a stop-start season that has been plagued by inconsistencies. The locals are currently in ninth place with their form after 21 games showing six wins and 10 draws against five defeats, scoring 20 goals and conceding 17. The 10 draws is more than any other club featured in the top division of Spanish football and that inability to finish opponents off has hampered their progress. If Bilbao want to progress in the league and cup they must find the killer instinct needed to turn a level finish into a win.

The locals have taken just four of the last nine La Liga points that have been available to them with their last three games showing one win, a draw and defeat. They were last seen in action playing out a disappointing goalless draw away to Alaves and that was a match their fans and many pundits expected them to win. There were chances for both teams to get the win in that game but neither side had the composure in the final third of the pitch to edge the play and snatch all three points. Another disappointing draw and another reminder that the Athletic Bilbao attack must improve.

Followers of Barcelona feared the worst when facing a season without starman Lionel Messi and the club operating under a stringent transfer policy. There is a generation of Barcelona fans who are used to seeing their team splash the cash on players, win trophies and set the pace in Spain. Things have changed and many of these supporters are now faced with the harsh reality of supporting a football club where success isn’t guaranteed, something supporters of most other teams had to come to terms with years ago.

In La Liga, Barca have struggled for consistency and are currently down in sixth place, looking like they could miss out on a place in the top four of the division and a spot in next season’s Champions League. They have already been eliminated from UEFA’s elite competition this term and will be involved in the Europa League going forward. That is just a sample of how far this team has fallen over the last 12 months and it has been a shock for all involved. But the players must rally back and could breathe life back into their season by winning the Copa del Rey.

Despite their lowly league position, Barcelona enjoy an extended unbeaten run with their last five league matches showing two wins and three draws. They were last seen in league action fighting out a disappointing 1-1 away to Granada, dropping two points when they were the red hot favourites to win the game. Barca took the lead through a goal from de Jong on 57 minutes but Rodriguez Diaz hit back on 89 minutes. Things went from bad to worse for Barca as they had Paez Gaviria sent off for a second bookable offence near the end. The coaching staff will want to see an immediate response.

Athletic Bilbao will enjoy the backing of the home support and the players will be hoping fans can cheer them on to a famous victory. Beating Barcelona in the cup won’t be easy and Bilbao have had problems beating teams in La Liga but this is a chance to leave their league woes at the door and enjoy the distraction of cup football. There will be an air of excitement around the stadium and the players should respond to that.

Barcelona fans have been put through the wringer this season but the team’s recent results appear to suggest things are settling down. There is slightly more stability off the field of play and that is leading to better results on it. If Barca are firing on all cylinders they should have enough to claim an important win in their season but the stats suggest this will be close.

The pre-match betting odds available at 22bet has Athletic Bilbao at 3.46 to claim a vital cup with while supporters of Barcelona can get 2.152. The draw is 3.32.

Make sure to bet on Athletic Bilbao v Barcelona with 22Bet!