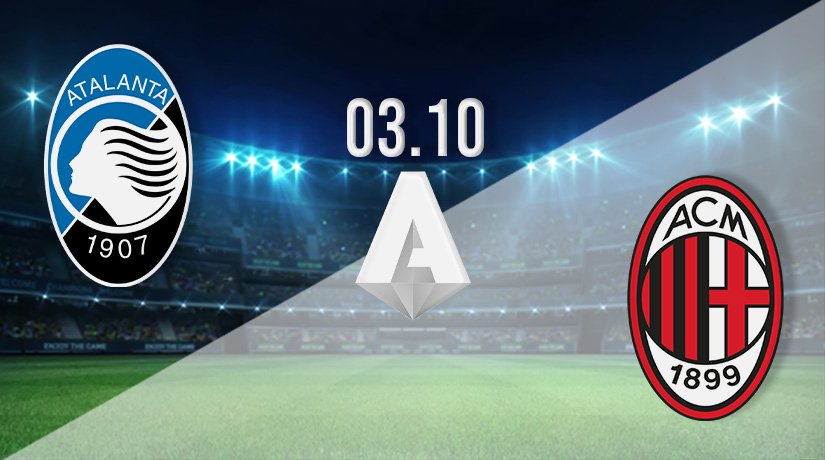 The opening weekend of October brings a fresh round of Serie A matches with games scheduled from Friday through to Sunday. The majority of matches will be played at the end of the week with six on the programme for Sunday. That includes the fixture involving Atalanta and AC Milan which is set for a 19:45 GMT start and will be shown live on television to a global audience. The teams look well-matched on paper and armchair fans hope this game lives up to the hype.

Atalanta and AC Milan are two teams hoping to finish in the top four of the Serie A this season and continue their involvement in the UEFA Champions League. Atalanta holds the home advantage and will be looking to make it count but everyone connected to the locals will be aware of the challenge that awaits them here. They are up against a Milan side that fancies themselves good enough to win the league. To improve their chances of achieving that, AC must be unbeatable at home and strong on their travels.

When flicking through the trends associated with this fixture, we make a point of interest. In the two games played last season, the team away from home took the points. Atalanta won 3-0 in Milan before AC strolled to a 2-0 win at this venue back in May of this year. Will that trend continue? Followers of Milan certainly hope so but those loyal to Atalanta remember all too well their last home win over AC Milan, a 5-0 less than two years ago. A repeat is unlikely, but we can take nothing for granted in this league.

Atalanta entered the weekend sitting in seventh place in Serie A with their record standing at three wins, two draws and a defeat. It wasn’t the start fans had hoped for when making their pre-season predictions but the 11 points gained is enough to keep them within touching distance of the leading pack. The home team are already seven points off the pace set by Napoli at this stage meaning a title tilt is already unlikely but not impossible. Atalanta are just a point behind Roma and the top four which is their main goal for the campaign. They want to secure a Champions League slot for next season.

Taking three wins from their first six is impressive and it’s even better when realising two of those victories have come in their last three games. The home team head into this match on a three-game winning run and that turnaround in form would have done wonders for team morale. Everyone in the home dressing room will be eager to build on that success and continue to climb the ladder towards the prizes. That purple patch is made up of two wins and a draw with the spare coming in their most recent game.

Atalanta beat Salernitana 1-0 on the road last month and built on that with a 2-1 victory at this venue against Sassuolo. That was six points taken and Atalanta deserve credit for that but those wins did come against teams they really should be beating. They were last seen in action fighting out an entertaining 2-2 draw in Milan against Inter. They held a 2-1 lead at half time in that match but were pegged back by Dzeko on 71 minutes to ensure a share of the spoils which looked a fair result.

AC Milan enter this match with a proud unbeaten record for the season that consists of five wins and one draw, agonisingly close to a perfect start. The 16 points gained leaves them two points behind Napoli after six matches, with the current leaders carrying a 100% record and looking like they could mount a serious challenge to the likes of Juventus and the two Milan teams. However, it remains to be seen how strong The Old Lady are this season. AC Milan will certainly expect to be in the running throughout, and they have a team that looks good enough to be champions come spring.

The visitors make this trip, having won each of their last two games and four of their five most recent outings. They were held to a draw by Juventus away from home last month, with that match finishing 1-1. Morata fired Juve into an early lead, with Milan needing an equaliser from Rebic on 76 to snatch a point. They were better next time, returning to Milan to hammer Venezia 2-0 thanks to goals from Diaz and Hernandez, both strikes coming in the second period. That was only their second clean sheet of the month.

Milan continued their winning ways and impressive start to the season when beating Spezia on the road last weekend, but they had to roll up their sleeves to achieve it. Maldini fired AC into a lead in the early exchanges of the second half before Verde levelled up on 80 minutes. With the game heading for a tie, Diaz showed his class to find the net and score another important goal in the dying minutes of play. More of that character will be required if they are to take three points from this game.

This should be a thrilling contest and one certainly worth your attention. The match has the potential to be a classic as two sides pushing for the prizes this season clash with the confidence that comes from strong recent form. Atalanta holds the home advantage but will that be enough to hold off a Milan side gunning for the title? We’ll soon find out.

The stats attached to this game shows at least one team has failed to find the net in three of the last four renewals. Will that trend continue? Interestingly, we’ve seen two wins for each side in the last five games, with the spare being a draw. This really couldn’t be any closer, and the fact there’s so much at stake here should make it even tenser.

The pre-match betting odds available to registered members of 22bet shows Atalanta are 2.06 to win this match. The draw is 3.5, or you can back AC Milan to leave with all three points and the bragging rights at 3.52.

Make sure to bet on Atalanta v AC Milan with 22Bet!