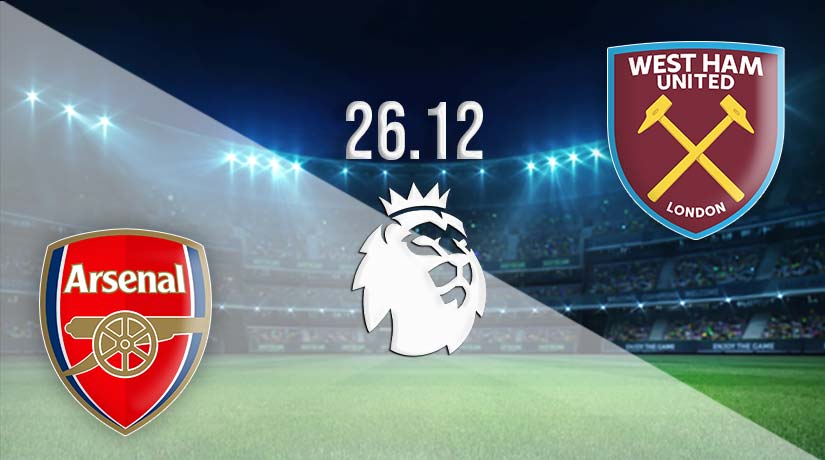 The English Premier League is back on our screens, and it’s not a moment too soon for lovers of the world’s most-watched division. We have some fascinating matches to look forward to this week, starting on Boxing Day in London, where Brentford host Tottenham in the early afternoon kick-off. You can read our in-depth preview of that match on this site. But on this page, we focus on a game with all the ingredients of a Christmas cracker. A gift fitting of the season. Arsenal takes on West Ham as North London battles East London. But which will come out on top?

The Gunners and Hammers have a long, fascinating history that can be traced back to 1906, when the pair first met in the FA Cup. Arsenal was formerly a neighbour of West Ham, coming from North Woolwich, which was a short journey from Upton Park by road, rail, or boat. But with both sides leaving their original homes, they don’t share the neighbourly love they once did. All that has been left behind is a passion to defeat the other. This is a derby match where no favours are given, nor are they requested. We are all set for a thrilling 90 minutes of club football in the UK capital. Are you ready to enjoy the show?

Football fans planning to spend their Boxing Day watching live sports on TV will have this match near the top of their to-watch list. And if the game follows the trends of this fixture, we are in for an enjoyable match with plenty of talking points and a few goals to keep us entertained. Arsenal did the double over West Ham last season, winning 2-0 in North London and 2-1 in East London. The Hammers hadn’t beaten the Gunners since a memorable 1-0 in 2019 when Alexandre Lacazette scored the winning goal. We must go back even further for the last time Arsenal lost at home to West Ham. But we can take nothing for granted in this renewal.

Arsenal picks up their title charge in a fantastic position with the Gunners sitting on top of the league and looking every inch a team capable of going all the way. Followers have been reluctant to get too carried away with their side’s fantastic recent form as they have suffered from a few false dawns in the past. Are we witnessing the real deal? Can Mikel Arteta, who was so close to being sacked as the manager of Arsenal just last season, be about to make history? The former Gunners player has his men firing and will do his bit to ensure they have every chance of winning the league.

The home team prepares for this game with their stats for the season showing a dozen wins against one draw and a single defeat. We have seen Arsenal score thirty-three goals in those fourteen matches while conceding just eleven. That’s impressive, and it’s even more attractive compared to the efforts of the sides around them in the pecking order. They have scored seven goals fewer than Man City in second but have also conceded three fewer goals than their nearest rivals and the defending champions. That strong defence will be worth its weight in gold as the season progresses.

Arsenal won four and drew one in their last five games before the World Cup break. They did take a maximum of nine points in their three most recent outings, meaning the squad returns in high spirits, eager to continue their winning ways and title charge. Will Qatar 2022 be remembered as spoiling Arsenal’s chances, stealing their momentum, and allowing Man City back into the race? It’s possible, of course, but only if the players allow that to become true. They are in a strong position and have everything they need to kick on and win the league.

West Ham United was a dark horse in the Premier League title race last season and spent much of the campaign battling for a top-four finish before slipping off the pace in the closing weeks. Fans hoped to see more of the same from David Moyes and his men this term, but things haven’t gone according to plan. The Hammers, at this stage, look more likely to be relegated to the Championship than they are to win the Premier League. Supporters are in a state of shock but know how quickly things can turn around in this division.

A win on Boxing Day would breathe life back into their season. It could get them firing again. But does West Ham have the quality needed to topple the league leaders? This club has a reputation for upsetting the odds, and they’d love nothing more than to beat the league leaders. Victory would get their season back on track, but it would blow the EPL title race wide open while hurting a London rival. There’s more to play for here than the three points. That’s for sure. But beating Arsenal won’t be an easy feat.

The World Cup arrived at the right time for West Ham, giving the players, coaches, and fans some relief from a miserable losing streak. They managed to win just one of their last five at this level, losing the other four, and were also subject to an embarrassing exit from the EFL Cup. Moyes could go from hero to zero over a 12-month period, but victory here would improve things.

Arsenal is top of the league, holds the home advantage, and enters on a winning run of form. West Ham is down near the relegation zone, is suffering from a losing streak, and will have the crowd against them. Most football fans will expect this match to follow the form.

The pre-match betting odds available to all registered members of 22bet have Arsenal at 1.488 with West Ham United 6.4 and the draw 4.46.

Make sure to bet on Arsenal v West Ham with 22Bet!