Virgil van Dijk, is a Dutch professional footballer who plays as a centre-back for English Premier League club Liverpool and captains the Netherlands national team.

After beginning his professional career with Groningen, he moved to Celtic in 2013, where he won the Scottish Premiership and was named in the PFA Scotland Team of the Year in both of his seasons with the club, also winning the Scottish League Cup in the latter. 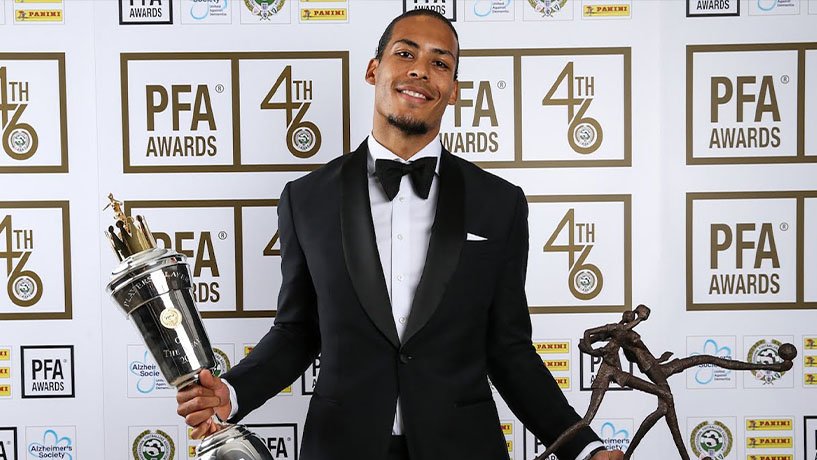 In September 2015, he joined Premier League side Southampton before signing for Liverpool in January 2018 for £75 million, a world record transfer fee for a defender. Van Dijk was involved in reaching the 2018 UEFA Champions League Final during his first spring at Liverpool. Van Dijk made his international debut for the Netherlands in 2015 and became captain of his country in 2018.

Considered to be one of the best defenders in the world, he is known for his strength, leadership and aerial ability. Van Dijk was named the PFA Player of the Year and the Premier League Player of the Season for the 2018–19 season.

Van Dijk initially struggled to break into Groningen’s first team with club stuff believing he was “overtired” after extensive playing time with Willem II’s academy and reserve sides. He made his professional debut for the club on 1 May 2011, coming on as a 72nd-minute substitute for Petter Andersson during a 4–2 victory against ADO Den Haag. 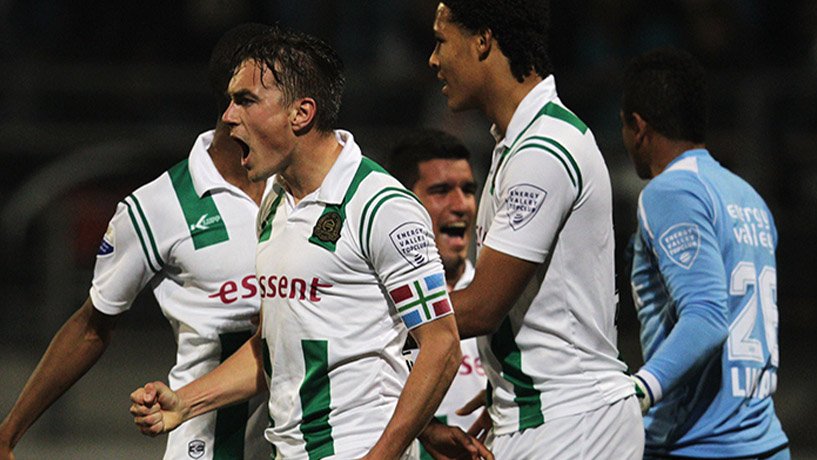 On 29 May, and against the same opposition, he made his first start for Groningen and scored his first professional goals, netting twice in a 5–1 win in a UEFA Europa League play-off match.

During the 2011–12 Eredivisie season, Van Dijk made 23 league appearances for the Eredivisie team, and scored his first regular-season goal during the club’s 6–0 victory over Feyenoord on 30 October 2011. He suffered a personal setback during the campaign, however, as soon after his 20th birthday he was admitted to hospital with peritonitis and kidney poisoning. Van Dijk later revealed that he had been close to dying as a result of the medical emergency and that the hospital had even gone so far as to ask him to sign a “sort of will” in the event of his passing.

He did, however, return to the field for Groningen and continued to impress for the club the following season. At the end of the campaign, and with Van Dijk having “outgrown” the club, he was offered to a number of bigger Eredivisie clubs, including Ajax, all of whom elected not to sign him. Instead, in June 2013, he joined Scottish side Celtic.

On 21 June 2013, Van Dijk signed with Celtic for a fee of around £2.6 million, on a four-year deal including a 10% selling-on fee for Groningen. He made his debut on 17 August, replacing Efe Ambrose for the final 13 minutes of a 2–0 Scottish Premiership win over Aberdeen at Pittodrie Stadium. A week later, he made his first start, in a 2–2 draw with Inverness Caledonian Thistle at Celtic Park. On 9 November, Van Dijk scored his first Celtic goals, heading one in each half of a 4–1 win against Ross County. After a solo run, he scored within five minutes the only goal of a victory over St Johnstone on 26 December.

Van Dijk scored again on 26 January 2014, in a 4–0 win versus Hibernian for Celtic’s 11th consecutive league win. On 25 February, he was sent off after 13 minutes of an eventual 2–1 loss at Aberdeen, for a professional foul on Peter Pawlett; it was Celtic’s first defeat of the season. With Celtic having already won the league, Van Dijk netted again on 7 May to put his team 3–1 up away to St Johnstone, in an eventual 3–3 draw. He was one of three Celtic players named in the PFA Scotland Team of the Year. Van Dijk was nominated for the PFA Scotland Players’ Player of the Year award, but lost out to fellow Celtic player Kris Commons.

On 22 July 2014, Van Dijk and Teemu Pukki each scored twice in a 4–0 home win over KR in a UEFA Champions League qualifier, putting their team into the next round 5–0 on aggregate. His first goal of the Premiership season came on 9 November, finishing from Stefan Johansen’s last-minute corner for a 2–1 win at Aberdeen. Three weeks later, Van Dijk scored the first and last goals of Celtic’s 4–0 win versus Heart of Midlothian in the fourth round of the Scottish Cup. Four days after that, his sixth goal of the season was enough for victory in a home match against Glasgow neighbours Partick Thistle.

Van Dijk was again on target on 21 January 2015, opening a 4–0 home win over Motherwell. On 26 February, he was sent off in the 36th minute against Inter Milan for a foul on Mauro Icardi, as Celtic lost 1–0 on the night, 4–3 on aggregate in the last 32 of the UEFA Europa League. He was again sent off on 8 March in the Cup quarter-final away to Dundee United at Tannadice Park, receiving a red card after eleven minutes for a confrontation with Calum Butcher. His suspension for the following week’s Scottish League Cup Final was overturned on appeal, as was that of Paul Paton, who was sent off when mistaken for Butcher. Van Dijk played the full 90 minutes of the final at Hampden Park, which Celtic won 2–0. On 18 March, Celtic’s third consecutive match against Dundee United, Van Dijk scored in the last minute to confirm a 4–0 win in a Cup replay.

On 19 April, Celtic contested the Cup semi-final against Inverness at Hampden, and Van Dijk opened the scoring with a free kick. After the dismissal of goalkeeper Craig Gordon, Celtic fell 3–2, ending their chance of a treble. Three days later, again from a free kick, he confirmed a 2–1 win away to Dundee. His team again won the league, and Van Dijk was included in the league’s Team of the Season for the second consecutive campaign. He was again shortlisted for the PFA Scotland Players’ Player award, but lost out to another team mate, this time Stefan Johansen.

Van Dijk was reportedly “considering his future” in Glasgow after Celtic were knocked out of the 2015–16 UEFA Champions League in the qualifying rounds to Malmö of Sweden.

He made his debut for Southampton on 12 September in a 0–0 draw against West Bromwich Albion at The Hawthorns. Two weeks later, Van Dijk marked his third Premier League appearance with his first goal for the club, which came in the form of a header in the 11th minute to put Southampton in front, following a set-piece from James Ward-Prowse in a 3–1 home win over Swansea City. On 7 May 2016, Van Dijk signed a new six-year contract with the Saints.

On 22 January 2017, he was named team captain of Southampton, after the departure of José Fonte. On the same day, he suffered an ankle injury against Leicester City. This ruled him out of the 2017 EFL Cup Final, which Southampton lost to Manchester United at Wembley Stadium.

After a successful 2016–17 season at Southampton, Van Dijk was subject to interest from Liverpool, who apologised to Southampton for an illegal approach for the player after having reportedly made clear his interest in a move to Liverpool. On 7 August 2017, Van Dijk handed in a transfer request to Southampton and released a statement along with it, emphasising his wish to join a different club in the transfer window.

Van Dijk remained with Southampton for the start of the 2017–18 season and made his first appearance since being injured in January, coming on as a late substitute in a 1–0 victory at Crystal Palace on 26 September. He made what turned out to be his final appearance for Southampton on 13 December 2017, in a 4–1 home defeat to Leicester. It was also his last appearance in any of Southampton’s matchday squads, as he was omitted from the squad for the rest of his tenure at the club in light of speculation surrounding his future.

On 27 December 2017, it was announced that Van Dijk would join Liverpool when the winter transfer window opened on 1 January 2018 for a reported fee of £75 million. Former club Celtic would receive 10% of Van Dijk’s transfer fee, due to a sell-on clause placed in his Southampton contract. Southampton claimed the undisclosed transfer fee would constitute a world record fee in football for a defender.

He made his debut for Liverpool on 5 January in the third round of the FA Cup and scored the winning goal with a late header in a 2–1 victory against local rivals Everton. In doing so, he became the first player since Bill White in 1901 to score on his debut in the Merseyside derby. Van Dijk and Dejan Lovren built a strong partnership at the heart of Liverpool’s defence, with the Dutchman being credited for improving Liverpool’s previous defensive issues.

On 20 August 2018, Van Dijk was voted Man of the Match by BBC Sport and Sky Sports for his performance in a 2–0 win over Crystal Palace. Van Dijk received the Liverpool Standard Chartered Player of the Month award for his performances in August. On 2 December, Van Dijk was awarded an assist for the winning goal in a derby match against city rivals Everton. Liverpool won 1–0 thanks to Divock Origi’s 96th minute goal, set up by a Van Dijk volley and a subsequent error from Everton goalkeeper Jordan Pickford. The Dutchman was ultimately awarded the PFA Player of the Month for November 2018. On 21 December, Van Dijk scored his first goal in the Premier League for Liverpool in a 2–0 away win against Wolverhampton Wanderers. The Dutchman continued his impressive form in the 2018–19 season by winning the Premier League Player of the Month prize for December 2018.

On 27 February 2019, Van Dijk scored twice in a 5–0 win against Watford. The following month, he scored once – his first goal in the Champions League for the club – and assisted another in a 3–1 win over Bayern Munich. In doing so, he became the first player since Craig Bellamy in 2007 to score and assist a goal for Liverpool in a knock-out stage match away from home in the competition.

Van Dijk made his full international debut for Netherlands on 10 October 2015, in a 2–1 victory away from home against Kazakhstan in a UEFA Euro 2016 qualifier. 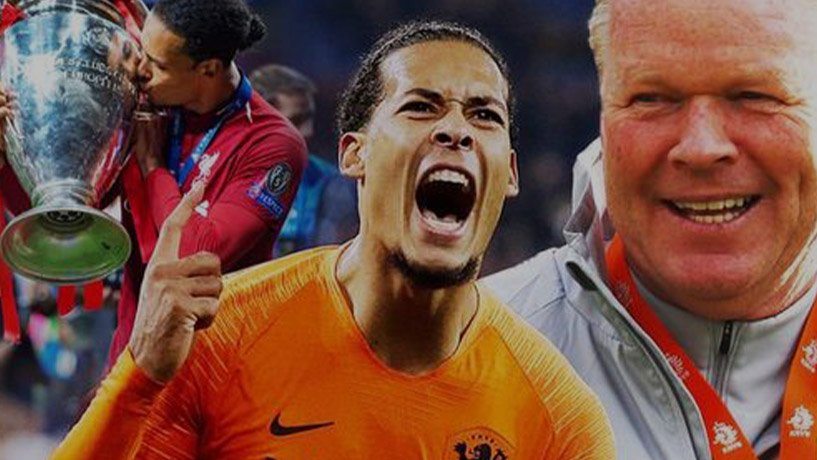 He was awarded the captaincy of his country by manager Ronald Koeman on 22 March 2018, and his first match as captain was a 1–0 home friendly defeat by England the next day. On 26 March, he scored his first international goal to conclude a 3–0 win over European champions Portugal at the Stade de Genève. On 13 October, he scored in a 3–0 win over 2014 World Cup champions Germany in the UEFA Nations League.