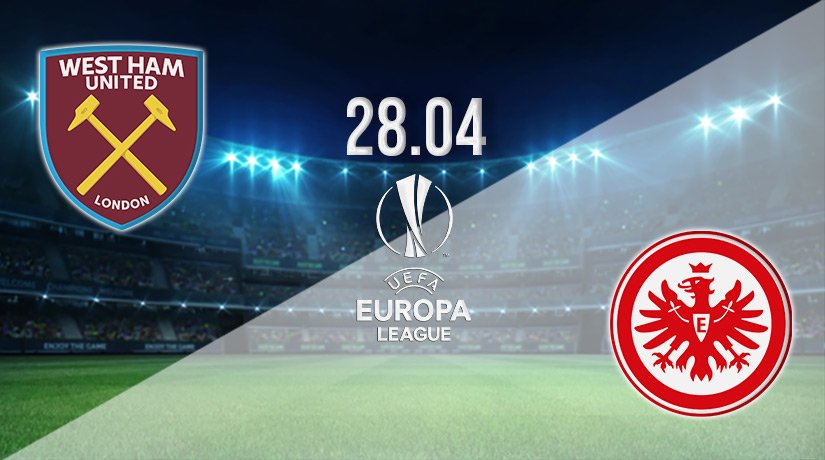 After the last-minute 1-0 heartbreak at Stamford Bridge in the English Premier League, West Ham’s focus shifted quickly to Thursday’s Europa League Semi-Final fixture against Eintracht Frankfurt at the London Stadium starting at 20:00GMT.

Can West Ham Make History by Taking a Major Step to Qualify for the Europa League Final?

West Ham’s qualification to the semi-finals at the expense of the fancied Lyon has the Hammers’ fans dreaming of a spot in the finals and even lifting the storied trophy.

The route to the final will have to go through Eintracht Frankfurt, who eliminated the even more fancied Barcelona in the last round.

The fixture at the London Stadium will test David Moyes’ men for their big-occasion credentials and their abilities to keep their nerve under pressure.

Moyes will look beyond history, focus on the football match and ensure his players are grounded and ready for their challenges.

Can Eintracht Repeat their Heroics at the Nou Camp by Taking Charge of this Semi-Final Tie against West Ham?

Eintracht’s performance away at Barcelona has been hailed as brilliant; they will have to repeat those performance levels to bolster their chances of overcoming the English Premier League side.

The focus will be getting the best result in the way leg before they host Londoners in Germany on Wednesday.

West Ham’s form has suffered in recent matches. In their last five outings in the English Premier League, the Hammers have won just once while drawing once and losing three times.

This run of form has seen the Londoners collect five points out of the available 15; it has also seen their challenge for the top-four dissipate at the business end of the season.

David Moyes’ side are now on 52 points, eight points behind 4th-placed Arsenal with four matches remaining in their season.

Eintracht have been in horrible form in the Bundesliga in recent weeks. They have not won a match in their last five outings.

Eintracht have drawn three times and lost twice in this run; they have collected three points and dropped 12.

This run of form has seen them drop down the table to 9th with 40 points, 14 points behind fourth-placed RB Leipzig.

David Moyes will be without long-term absentee Angelo Ogbonna, with the center-back recovering from a ruptured cruciate ligament since November 8th, 2022. The 33-year-old center-back is expected back at the beginning of August 2022.

Centre-backs Issa Dip and Kurt Zouma are also doubts for the clash against Eintracht.

The 25-year-old Issa Diop is nursing an ankle injury and is expected to return around June 13th. The 27-year-old Kurt Zouma sprained his ankle on April 17th, and he is a major doubt to feature in the clash against Eintracht on Thursday.

Eintracht will be without Jan Schroder, with the 19-year-l left-back recovering from a torn muscle fiber since April 18th, 2022.

Left-back Christopher Lenz is also a doubt to feature in the match against West Ham on Thursday as he recovers from a fractured toe since April 20th, 2022.

Diant Ramaj is also unlikely to feature on Thursday, as the 20-year-old goalkeeper recovers from a meniscal injury he suffered on February 3rd, 2022.

Bowen has had 15 goals and 9 assists in 45 appearances for West Ham this season. The forward has been the driving engine behind West Ham’s season, especially in the attacking phase.

Bowen will be crucial in the match against Eintracht with his energy, pressing, and goal-scoring.

This season, Borre has nine goals and five assists in 40 appearances for Eintracht.

The forward will be crucial for the German side when they take on West Ham on Thursday.

West Ham will adopt their pragmatic approach in this game; they will be solid and compact, which will be the basis upon which they will build their home performance.

Eintracht will also be compact and solid in their approach. This will make the match cagey, and only a goal will open it up.

West Ham will win this match and take a giant step towards the final.

Make sure to bet on West Ham vs Eintracht with 22Bet!