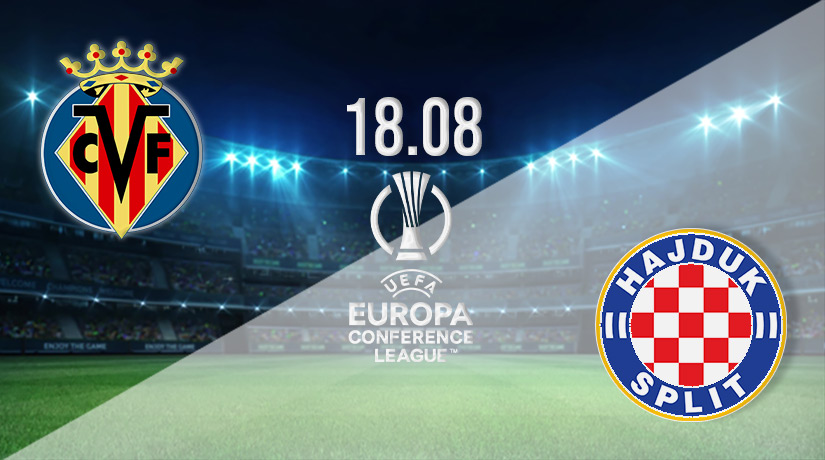 After getting off to a flying win in their first La Liga match of the season, triumphing 0-3 against Valladolid, Villarreal’s attention will switch to the Europa Conference League when they host the Croatian First League side Hajduk Split at the Estadio Ciudad de Valencia on Thursday at 19:45GMT.

Can Villarreal Extend their La Liga Form to the UEFA Europa Conference League?

Unai Emery’s side will be looking to extend their positive start to the season with a win against the Croatian side to progress from the play-offs. A win will especially be crucial ahead of the second leg of the tie in Croatia next week.

Villarreal will also be looking to give some players a run-out as they seek to bolster the squad’s fitness ahead of a long season.

Playing at home, Emery’s side will seek to dominate the ball and ensure they get a commanding win to take to Croatia next week.

Can Hajduk Split Pull of an Upset Away to Villarreal?

Hajduk will be looking for an upset result in Spain on Thursday. Villarreal is an established European side with an experienced manager who has won European titles.

Their work will be cut out as they travel to Spain ahead of the second leg next week in Croatia. The focus will be to get a positive result to bring home if they are to stand a chance of causing an upset.

Hajduk will focus on being solid and compact against Villarreal to ensure they keep the score line positive or get a chance to grab a counter-attack goal.

After finishing their pre-season schedule with impressive wins against Levante (3-1) and Inter Milan (2-4), Villarreal extend their form into their opening match away at Valladolid with a commanding 0-3 win.

Unai Emery’s side scored three goals and kept a clean sheet, which bodes well for the team ahead of the season where they are expected to challenge for Champions League qualification.

With substitute Alex Baena grabbing a brace, Emery showed that his bench can be impactful, and many of the substitutes made a case for inclusion in the clash with Hajduk Split on Thursday.

Hajduk will be looking to bounce back from the comprehensive 4-1 defeat to Dinamo Zagreb when they meet on Thursday.

Hajduk will also be looking to bolster their away from after they lost 1-0 away to Vitoria SC in the second leg of the third qualifying round.

The 30-year-old Spanish striker is Villarreal’s talisman as he leads the line alongside Jackson in the twin attack preferred by Unai Emery.

His clever movement inside and outside the box is crucial in opening up spaces for other attacking players for Villarreal. His aerial prowess allows the team to play the long out-ball from the back to their striker.

Moreno’s link-up play is crucial in ensuring the Villarreal attack works and bringing other players into play in the attacking phase.

His experience is also crucial for the team in performing under pressure and bringing a cutting edge in front of a goal.

The Croatian forward is a crucial cog for Hajduk as they seek to upset Villarreal. He has pace, creative movement, aerial threat, and a predatory presence in the penalty box.

With Hajduk playing with a back-three, Livaja’s role at the tip of their attack is crucial in ensuring that the system works and that the team poses an attacking threat going forward.

Livaja, alongside S. Biuk and Krovinovic, will be central to Hajduk’s attacking game plan.

Villarreal are expected to make some changes to their starting lineup from the team that started their La Liga campaign as Unai Emery hands other players in the squad some game time ahead of the long season.

Hajduk are expected to field their strongest team as they seek a positive result away in Spain against one of European football’s successful clubs.

Playing at home and in good form, Villarreal are expected to win the home leg convincingly and take a dominant result to Croatia next week.

Make sure to bet on Villarreal vs Hajduk Split with 22Bet!