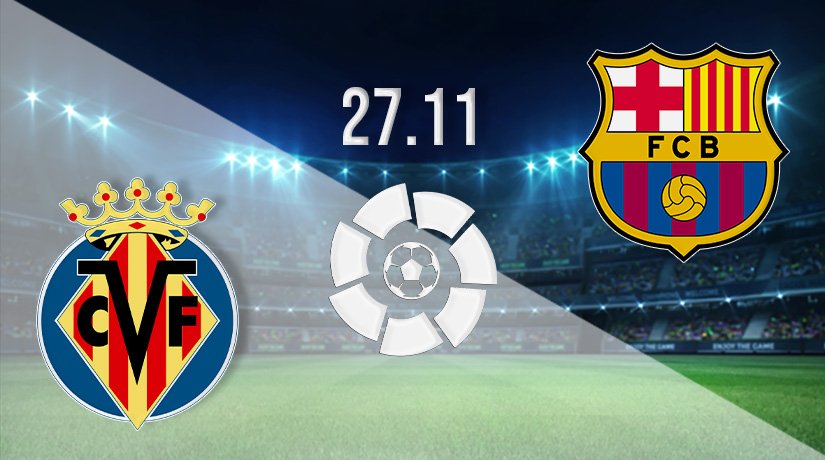 After a disappointing 1-1 draw at Celta Vigo, Villarreal will host Barcelona in La Liga at 21:00 GMT.

Unai Emery’s side, languishing at 12th on the La Liga table, need to spark their season into life as they seek to charge up the table into European places.

Barcelona are also looking to parlay Xavi Hernández’s first result as manager of the Blaugrana, a 1-0 triumph over city rivals Espanyol, into a concerted revival for the season.

Can Villarreal Turn Their Season Around to Finish in the Champions League Places?

After Unai Emery was briefly linked with the vacant position at Newcastle, he committed to the Villarreal project. However, he needs to sort out the form and consistency of the Yellow Submarine to make this season a success.

With a return of 16 points from a possible 39, Villarreal are underwhelming so far this season, especially after winning the Europa League last season.

At this point, they are closer to the bottom-of-the-table Levante than they are to the table-topping Real Madrid.

Can The Xavi Hernández Bounce Be Sustained?

The 1-0 win over city rivals Espanyol was a good start to the Xavi era, but it was also an agonizing one as Barcelona were left hanging on at the closing stages of the match.

If anything, the match revealed quite the scale and scope of the work Xavi has to do to get Barcelona back to their rightful place at the top of La Liga.

Xavi’s first match also showed that he will not be afraid to rely heavily on Barcelona’s young players that are showing such promise. But he will need to get the balance right to ensure that his trusting of youth is accompanied by results.

In the last five outings, Villarreal have won one, drawn two and lost two. This has left Unai Emery with five points from a possible 15. This underscores why the Yellow Submarines have failed to improve their league standing this season.

Villarreal’s form in the Champions League has been considerably better than their La Liga performances. In the first four rounds of fixtures in Group F, Emery’s side have seven points, level with Manchester United, having won two, lost one, and drawn one.

Given their usual standards, a return of 20 points from a possible 39 is unacceptable for Barcelona, which is why Ronald Koeman is out of a job and Xavi has been jettisoned into the Camp Nou to change their fortunes.

But still their recent form is worrying; one win, two draws, and two defeats in the last five outings is not good enough for the Blaugrana.

Unai Emery will have to contend with the absence of center-forward Gerard Moreno. The 29-year-old Spain international suffered a torn muscle bundle on October 25th, which means he has been sidelined for seven matches now.

Villarreal also face the risks of suspension for Etienne Capoue after getting four yellow cards in 11 appearances this season. The 33-year-old Frenchman will be available for the Barcelona fixture though.

Xavi Hernandez will be without several major first-team players in his early reign as Barcelona manager. Sergio Aguero (heart condition), Pedri (muscle injury), Ansu Fati (hamstring) and Ousmane Dembele (hamstring injury) are all unavailable for the match against Villarreal.

The system employed by Unai Emery requires an important link between midfield and attack without compromising on solidity. Manu Trigueros is this link within the team given his work rate and creativity.

Apart from scoring the winner against Espanyol in Xavi’s first La Liga match in charge, Depay is becoming a talismanic figure for the Blaugrana this season. He will be important again as Barcelona seek to gain the hitherto elusive consistency this season.

Expect Barcelona to play with energy, hog possession, and look to break Villarreal down. Expect Unai Emery’s side to be solid and play on the counter.

The momentum created by Xavi’s appointment and the faith he has displayed in youth will be enough to see Barcelona through in this match with three points.