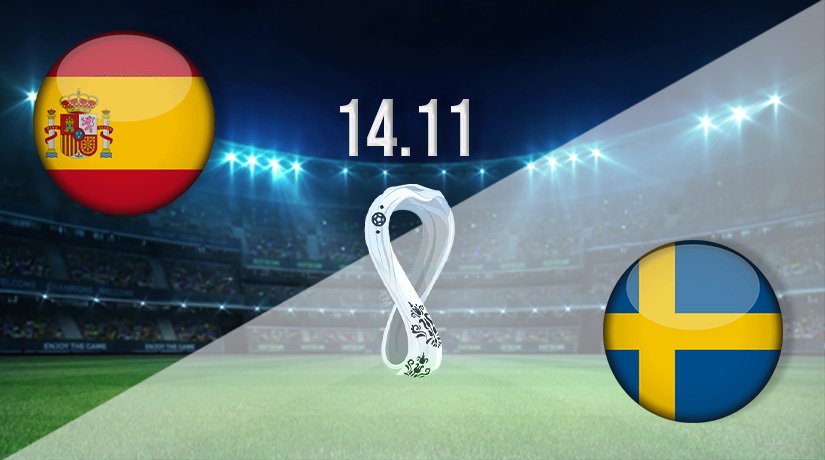 Sunday’s schedule brings football lovers a mixed bag with games played in the World Cup qualifiers in Europe and Africa. The European bracket boasts 10 matches as teams put the finishing touches to their campaign. With many of the groups still competitive and there to be won, we have a day of drama and excitement ahead.

The match that caught the attention of our team of football writers pairs Spain and Sweden who will clash from 19:45 GMT. The locals are the pundits’ pick to add another three points to their tally but know they can’t afford to take the ambitious Swedes lightly.

This is a battle involving the two highest-ranked teams in the group, but it’s the visitors that sit in pole position at present and know a draw would be enough to keep them there. Sweden’s lead over Spain remains a fragile one, meaning if the home team get the desired result, they will leapfrog their opponents and move into the driving seat.

This is an exciting setup and Group B ranks as one of the most competitive at this stage of proceedings. The winner of this match will likely go on to win the pool and secure their place at Qatar 2022, leaving the loser facing a playoff.

These teams have met a dozen times previously, and the head to head stats tell us to prepare for a competitive 90 minutes. Spain currently have the edge with five wins against the four of Sweden and three draws. Interestingly, Sweden haven’t lost to Sunday’s opponents in three matches, a run that stretches back to June 2019.

In that time, we have seen two low-scoring draws and a 2-1 home win for Sweden in September. If they are able to continue that unbeaten run, they will top the group.

Spain haven’t lived up to expectations

Spain entered the qualifying round of Qatar 2022 as the firm favourites to win their group and progress. They were expected to cement their spot at the competition proper with room to spare, and fans probably thought they’d be on easy street by this stage, with the players having the luxury of taking their foot off the gas.

Things haven’t gone according to plan, and instead of sitting back and admiring their comfortable lead over the chasing pack with two games to go, Spain are at the head of the chasing pack and in danger of finishing second in the group. Anything other than a home win will likely see them end in the silver medal position, and that’s not good enough in the opinion of supporters.

The locals enter this match with four wins, one draw and a defeat with the spare loss inflicted by current pool leaders and Sunday’s opponents Sweden earlier this year. The 13 points collected is four better than Greece in third, meaning we have a two-horse race for pole position, one that will go right down to the wire.

Spain have scored 13 goals which is more than Sweden but have conceded five, which is also more than their opponents, but there’s very little in either stat.

Since suffering that shock loss at the home of their group rivals, Spain have bounced back to record two wins on the bounce in this competition. That began with a 4-0 over Georgia and was followed with a 2-0 away to Kosovo. Two matches they were expected to win, and two they did without ever hitting top gear.

Spain then beat European champions Italy in the semi-final of the Nations League but were beaten in the final 2-1 by France despite taking a 1-0 lead in that game.

Sweden are within touching distance

Most followers of international football fully expected Sweden to be playing at Qatar 2022 and to make an impact in the competition. Still, the consensus was that they would have to come through the playoffs to achieve that.

Sharing a group with Spain meant a runners up finish was the predicted outcome by most famous pundits. That may still prove to be the case, but Sweden are performing above expectations and enter this match with a two-point advantage over the Spanish.

That comes as a surprise, but perhaps it shouldn’t as the nations shared Group E at Euro 2020, and it was Sweden that got the better of that battle, finishing two points clear of runners up Spain with two wins and a draw.

At present, it’s looking like that was no fluke and the critics were wrong to assume Spain were the strongest team in this division. Sweden have picked up where they left off at the Euros and are exactly where they want to be at this stage of qualifying.

Win this match, and they will be home and hosed, but a draw will also be enough to see them edge through. Will they play for a share of the points? It’s possible.

In this campaign, Sweden has won five and lost one game but enter on the back of two wins in their last two games.

Greece inflicted the defeat in September as the former European champions showed a glimmer of their quality.

Since losing 2-1 to Greece, we have seen Sweden beat Kosovo 3-0 and then bag a 2-0 revenge win over Greece at home. They enter in a great place with two wins, five goals, and a pair of clean sheets.

Spain have the home advantage and will feel they have a point to prove after losing to Sunday’s opponents. They will take heart from that win for Greece back in the summer and know their fate is in their own hands. Win the last two games, and they will secure the group and book a place at Qatar 2022.

Sweden would love to do the double over Spain and get another win to wrap up the group, but a draw would be enough to see them through. Trying to win the match could see them punished on the break, so they may take a more cautious approach and keep things tight, inviting Spain to break them down, knowing all the pressure is on the home team.

Make sure to bet on Spain v Sweden with 22Bet!