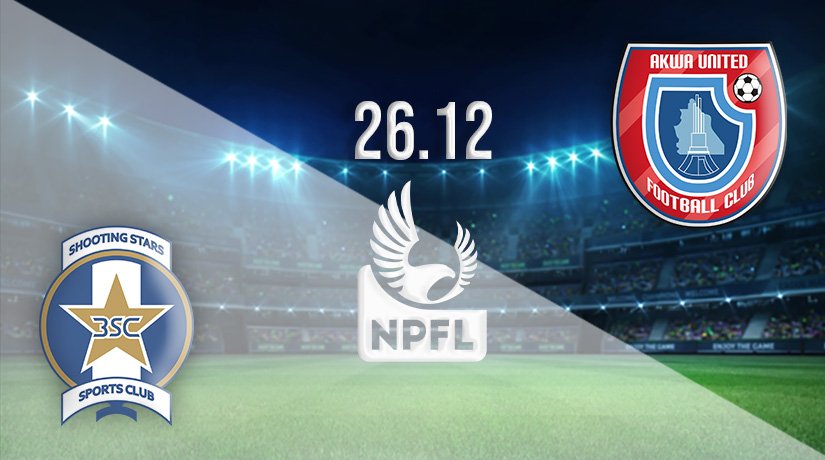 3SC will be looking to make a statement in the NPFL by winning against the reigning champions. On the other hand, Akwa United will look for a great start to the season to set it up well for another title challenge.

Can Shooting Stars Shock the Nigeria by Beating the Champions?

After gaining promotion, Rasheed Balogun’s side will be looking to maintain their NPFL status this season. Matches like the ones against the champions Akwa United will count as a bonus for Shooting Starts.

Rasheed Balogun will encourage his team to give it a proper go and enjoy themselves playing against the NPFL big boys.

Can Akwa United Keep their Nerve to Navigate a Tricky Fixture?

Kennedy Boboye’s side will come up against a stubborn newly promoted side when they take on Shooting Stars on Sunday. But Akwa United should win this match if they are to maintain their hopes of defending their title this season.

Kennedy Boboye will prepare them not to be complacent against a team against which they should be winning. Instead, there is a need for a ruthless streak from Akwa United, and relentlessness like the one they showed last season en-route to the NPFL title.

Rasheed Balogun will be hopping that his side carries some of the form they showed in the Nigeria National League Super Eight play-off stages during which they won their promotion into the NPFL.

In their Group B play-offs, Shooting Stars saw off Ekiti United and Bendel Insurance to qualify alongside Remo Stars.

After elimination from the CAF Champions League in the first preliminary stage by CR Belouizdad by a 2-1 aggregate score. After winning the home leg 1-0, Akwa United lost the return leg 2-0 in Algeria.

This was a disappointing campaign for the NPFL champions in the continental competition. Kennedy Boboye will be looking to put this exit from the Champions League tournament behind them as the NPFL kicks off.

Rasheed Balogun will have all his players available for selection in the match against the reigning Nigerian champions.

Having everyone fit and ready for the match will be a boost to their hopes of pulling off a shock result.

Akwa United has not reported any injuries or absences ahead of the match against the newly promoted Shooting Stars. Kennedy Boboye is likely to choose his strongest 11 against 3SC.

Awujoola is a new signing to Shooting Stars; he is a winger that is expected to inject the much-needed pace and urgency to the 3SC attack.

His main attributes are attacking penetration using is pace, cutting in from the sides, and influencing the game through crosses and his finishing touch. He will be a crucial asset to the newly promoted side as they seek to maintain their NPFL status.

Awujoola will be the centre of attraction as he makes his home debut against the reigning champions Akwa United.

The winger was instrumental in Akwa United’s romp to the title last season. He was also crucial in their matches against CR Belouizdad, where he managed to notch a goal in the 2-1 aggregate defeat for Akwa.

Friday will be central in the champions’ approach to the match against Shooting Stars. His runs behind the defence, dribbling, and killer instinct will be needed in this match on Sunday.

Expect Akwa United to take control of proceedings by bossing possession and dictating the match. They will look to take the sting form the match and give Shooting Stars no encouragement. Shooting Stars will be looking to contain Akwa United attacking talent and look to attack on the counter. Akwa United will have too much for the newly promoted side; the champions will take all three points.

Make sure to bet on Shooting Stars vs Akwa United with 22Bet!