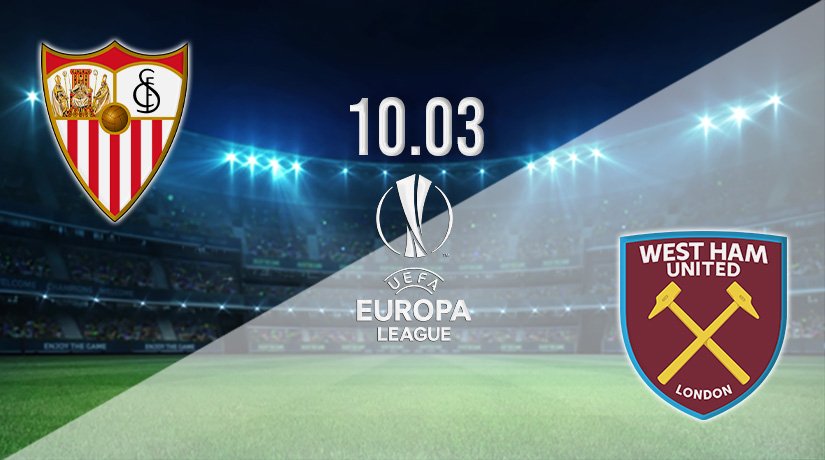 Following the excitement of the Champions League action on Tuesday and Wednesday, football fans look to the Europa League for their interest on Thursday. UEFA’s second-string competition enters the Round of 16 stage, where the group winners re-join the party after enjoying a bye in the playoff rounds when the Champions League third-place finishers dropped into the running. The game of the night comes from Spain, where La Liga side Sevilla take on Premier League battlers West Ham United. This first leg kicks off at 17:45 GMT and will draw a huge audience across Europe.

Which side will come out on top here and boost their chances of progressing to the quarter-final, taking a step closer to winning the trophy? That remains to be seen, and nothing will be decided in this match, but it’s an opportunity for Sevilla to use their home advantage to take a cushion to London for the second leg. The Hammers want to throw a spanner in the works by claiming victory in Spain and moving into the driving seat in this tie. This promises to be a tense but enjoyable 90 minutes of action involving two of the competition’s possible champions.

Sevilla and West Ham have never met before in competitive action. That won’t come as a major surprise to many followers of the beautiful game as it’s not often you find the English team playing in European competition, especially in the knockout stages. That means both sides have a real opportunity to add their name to the history books by getting off to a winning start. These teams look evenly matched on paper. It’s now up to the players to show they have the edge when it comes to character and fighting spirit.

Sevilla started this season in the Champions League but played the minimum number of games before being relegated to the Europa League. Added to Group G, the La Liga side were one of the favourites to progress to the knockout stages of UEFA’s elite. Still, a failure to nail down any kind of consistency meant they finished well off the pace set by Lille, with Red Bull Salzburg doing enough to sneak through in second. Stats of one win and three draws against two defeats meant Sevilla were much closer to bottom than top.

They entered the playoff round of the Europa League, where they met a runner up from the group stages in Dinamo Zagreb. It wasn’t an easy challenge by anyone’s standards, but Sevilla had enough quality to go through and avoid the embarrassment of back to back eliminations. The damage was done in the first leg in Spain when winning 3-1 to put one foot in the next round. That gave their opponents an uphill struggle, and despite winning the second leg 1-0, Zagreb lost 3-2 on aggregate.

Sevilla were last in action on Friday evening, meaning they have enjoyed almost a week to recover for this clash. They failed to impress in their most recent La Liga outing, stumbling to a goalless draw away to Alaves. That was a match they were expected to win and climb the table, but they returned home with just one point, failing to find the net despite creating plenty of chances. Fans will want to see the attack in a more ruthless mood on Thursday.

West Ham United return to Europa League action following an impressive group stage. The Hammers were added to Group H alongside Dinamo Zagreb, Rapid Vienna and KRC Genk. Despite their lack of European experience in recent years, they progressed as winners of the set without encountering too much resistance along the way. The Hammers posted stats of four wins, one draw and a defeat with 11 goals scored and only three conceded. The 13 points gained left them three ahead of runners up Zagreb.

West Ham’s only defeat in the group came in their final match, and they won only one of their last three, but by the time they suffered that loss, the group had already been decided. West Ham did the damage early, racing into a lead and opening a gap over the chasing pack. They now have confidence in their work at this level and will believe they can go all the way and win the trophy. Following the elimination of Borussia Dortmund, the Londoners are one of the favourites.

West Ham were last seen in action on Saturday evening when losing at Anfield. That was a match Liverpool were expected to win and keep up the pressure on Premier League leaders Man City, but West Ham made life difficult for the Reds. At full-time, just one goal separated the teams, the winner scored by Mane on 27 minutes. Both teams had chances in the second half but were unable to find the net.

Sevilla know their best chance of success comes from winning the first leg at home and heaping pressure on their opponents ahead of the return in Stratford. The La Liga side were less than impressive last time out but have enjoyed an extended break, and that will ensure they arrive fresh, fit and ready for action.

West Ham were beaten by Liverpool in their previous match, but there’s no shame in that effort. The Reds are flying at the minute, so West Ham must dust themselves down and focus on Thursday night’s trip. Getting a win in Spain won’t be easy, but the English side have the quality to score and make things interesting. This is sure to be a tense 90 minutes of football.

Sevilla are priced at 2.08 for the win, with West Ham trading at 3.84 and the draw 3.2. In addition to the match winner betting, 22bet customers will also enjoy a range of specials. There’s both teams to score, correct score, half time/full time, handicap, first goalscorer and more.

Make sure to bet on Sevilla v West Ham with 22Bet!