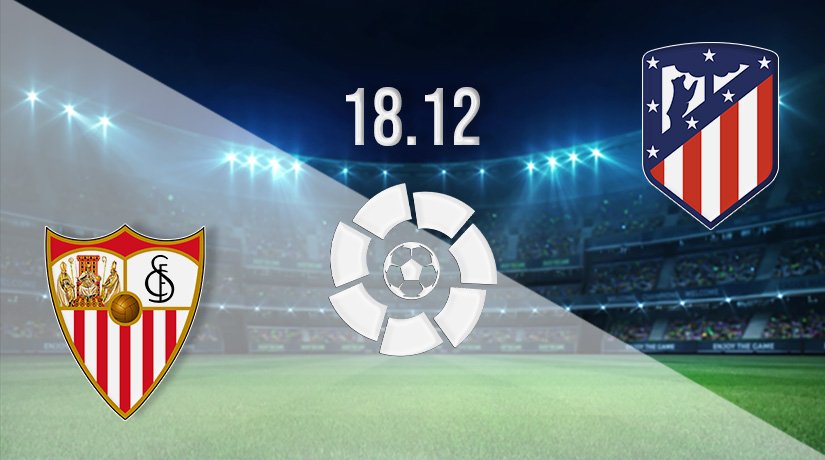 We are now into the thick of the festive period, and it’s a time of year the top leagues from across Europe are incredibly busy. A lot is said about the high wages players earn but they are certainly made to work hard for it in December.

An exciting match from the Spanish La Liga is scheduled for Saturday when two of the nations best-loved teams face off in a battle for three crucial points. With both teams believing they are good enough to win, it helps add a little more spice to the occasion.

Sevilla holds the home advantage, and they’ll be desperate to make that count. They enter this latest round of fixtures sitting in the prize places, and many respected pundits consider them to be the main danger to Real Madrid’s dominance this year.

In Atletico Madrid, we have the current champions of Spanish football and a team working hard trying to return to the standards set last season.

These teams last met back in spring, and despite Atletico going on to win the league, it was the home side that banked all three points. Sevilla won that game by a 1-0 scoreline. The deciding strike came from Marcus Acuna on 70 minutes, and fans would love to see another exciting win.

Pressure is building on this Madrid side from the stands and media as the team struggles for consistency. A strong away win would help get fans back on side.

Sevilla are fast becoming the dark horse of this season’s La Liga title race and they have emerged as genuine contenders for the crown. Sevilla start the week in second place, just behind current leaders and title favourites Real Madrid.

Sevilla line-up for this game with their stats for the season so far showing 10 wins and four draws against just two defeats, scoring 26 goals and conceding 11. The 34 points against their name means Sevilla are already eight off the ferocious pace set by Real Madrid and it’s looking increasingly likely that Blancos will run away win the title this term.

When taking a closer look at those numbers we note that although catching Real Madrid and moving into pole position isn’t impossible, things are certainly heading in that direction. Sevilla must put together an extended winning run and hope Real Madrid lose their form, allowing them back into the race.

At present, Sevilla are closer to Rayo Vallecano down in sixth place than they are the leaders, so there’s still plenty of work to be done this season, even if it’s just to hold their current position.

It’s interesting to note that Sevilla has conceded four fewer goals than Real Madrid at this stage and have the best defensive record in the league. The hosts have won each of their last two league games and were seen nicking a crucial 1-0 win away to Athletic Bilbao last Saturday.

That was a tight match but one Sevilla were able to take three points from thanks to a goal scored by Delaney on 38 minutes. Fans will want to see the same worth-ethic shown by the Sevilla stars here.

Champions have lost their last two

Atletico Madrid sent shockwaves throughout Europe last season when winning the La Liga title, denying Real Madrid and Barcelona. Fans hoped to see the team kick on from there and begin a period of dominance over the division and it looked like they might just do that, helped on by the problems at Barcelona which resulted in the loss of Lionel Messi to PSG.

But things haven’t gone according to plan for Atletico and the champions started this week further down the pecking order than many expected, sitting fourth following a less than convincing run of form.

The visitors are clinging on to the top four and they are already looking like a team that will do well to make it into the Champions League next term. Winning the league again is already looking like a huge task and it’s becoming increasingly likely that the title will change hands across the city of Madrid in spring.

Atletico have form of eight wins, five draws and three defeats, scoring 27 goals while conceding 18. Atletico have conceded more goals so far this season than Villarreal who are down in 13th.

A trip to a side challenging for top spot in the league is never encouraging but this game seems to be at exactly the wrong time for Madrid as they have lost each of their last two league games and confidence is low in the camp.

The visitors have won only two of their last five games and a hattrick of losses could see them drop out of the top four and go spinning down the league.

Sevilla are higher in the league than their opponents and are playing better football. Sevilla’s chances of winning the league may be slim due to Real Madrid’s relentless form but the hosts will be keen to keep winning and keep applying pressure. They’ll want to maintain their strong form and ensure no team welcomes a visit to this venue.

If they can play anywhere near their best, Sevilla should have enough about them to win the three points.

Atletico Madrid are looking like a shadow of the team that won the league last season and times is running out for them to rediscover that form. An away win over a high ranked team like Sevilla would do wonders for team morale and could help get them back on track but those two defeats would have seriously dented their confidence and a reaction is needed.

The pre-match betting available at 22bet has Sevilla priced at 2.75 to win this match with Atletico Madrid trading at 2.81 and the draw 3. There are many other betting markets available to 22bet members on this game, including both teams to score and handicap.

Make sure to bet on Sevilla v Atletico Madrid with 22Bet!