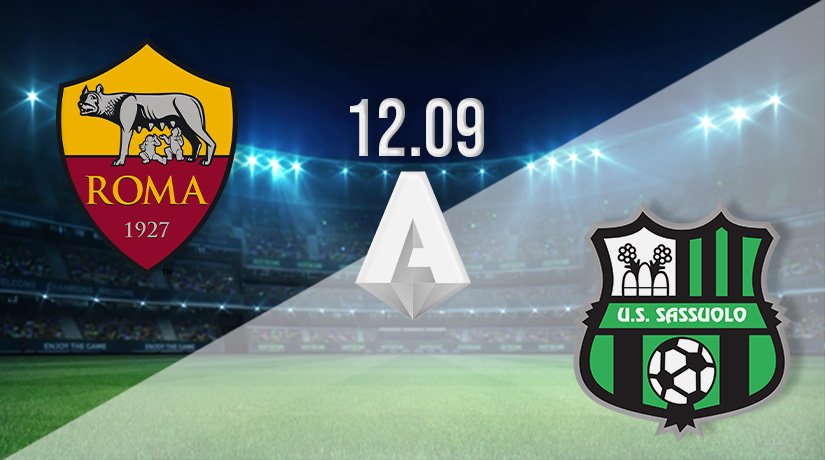 Serie A brings us a six-game Sunday schedule with Roma’s home match against Sassuolo pinned at the top of the bill. This clash will be played out in front of a capacity crowd in attendance at the stadium with millions more watching the play live on television. Armchair fans expect a thrilling 90 minutes and hope they are treated to a fair share of goals as the home team aim to continue their 100% start to the season.

Roma is amongst the front runners, and know another victory added to their haul could see them move to the top of the league. That will be all the encouragement the coaching staff needs to ensure the players are working hard during preparations. Sassuolo would dearly love to ruin the party and return home with three points but understand the size of the task that awaits them on Sunday.

Many football fans making predictions on Serie A football like to rely on the stats and trends. Browning the head-to-head scores relating to this fixture, we note that each of the last two games meetings have ended in a draw, with three of the last five also finishing level. The most recent clash produced an entertaining 2-2 in April. Three of the last four games has seen both Roma and Sassuolo score at least two goals each. Will that continue?

Roma sit on the heels of the leaders

Roma enters matchday three with a perfect record of two wins from their first two games before the international break. Fans will hope the disruption to the schedule doesn’t throw their team when they return for Sunday’s match. The locals are third in the table, having scored seven goals and conceded one, which gives them a +6 goal difference, one fewer than current leaders Lazio. The Roma attack has been key to that early success, but it is their defence that caught our eye. The ability to hold firm at the back will be the difference between Roma challenging for the title and challenging for Europe.

They got off to a winning start when beating Fiorentina at this venue by a 3-1 score. The goals that day came from Mkhitaryan and a Veretout double in what was an incident-packed match. The winning team had Zaniolo sent off for a second bookable offence on 52 minutes which levelled the teams after Dragowski was ordered off on 17 minutes. Credit goes to Roma for showing the fighting spirit and character needed to grind out a result, especially under such challenging circumstances.

They continued that form when winning their first away game of the season, smashing Salernitana 4-0 last time. Pellegrini was on target with two goals in that match while his teammates Veretout and Abraham helped put the game to bed and kill off any chances of a fightback from an opponent that looked to be out of their depth. Confidence is high in the camp, and fans hope it continues on Sunday.

Sassuolo travels to Roma on matchday three with the confidence that comes from carrying an unbeaten record. The visitors have collected four of the first six points available to them thanks to a victory on the opening weekend followed by a draw. They are performing above expectations already, and everyone connected to the club hopes they can continue their form and get something from this match. Returning home with all three points would be the perfect outcome, but a draw would be viewed as a decent return as it means they avoid defeat and keep hold of their unbeaten run.

The away team opened their account for the season with a deserved win at the earliest opportunity. They bagged three points on matchday one thanks to a battling 3-2 victory away to Hellas Verona in what was an enthralling contest. Sassuolo looked as dangerous in attack as they were weak in defence that day, but the win was a little more comfortable than the bare result, with the beaten team scoring a penalty on 90 minutes to set up a dramatic finish to the game. The victors were 3-1 to the good after 77 minutes.

They built on that opening day win with a point at home when hosting Sampdoria last Sunday. Despite being the home team, Sassuolo started that game as the underdogs but defended much better than they had in their previous match. They were unable to find the net despite creating chances but were solid at the back and limited the opportunities of their opponents—one point from three but encouraging performance.

Roma has a 100% record and is playing with confidence, but they are up against a stubborn opponent who is unbeaten themselves. There are goals in this Roma team, and fans will expect them to use the home advantage and collect all three points. Roma is certainly good enough to do that but must give their opponents maximum respect if they are to get the desired result.

Sassuolo knows they are up against it at the home of a team with a perfect record, but they are no slouches in the form department themselves and will come to win. The away team showed they can create chances and score goals in game one and then the strength of their defence in game two. They must bring both together if they are to trouble Roma.

Armchair fans and 22bet members can pick the winner or play one of the many specials markets available. These include the first goalscorer, correct score, handicap, total goals, half time/full time and more. When the game begins, the pre-match betting switches to in-play betting, which allows gamblers to bet while the game is live.

Make sure to bet on Roma v Sassuolo with 22Bet!